Emma Gross ’15 tries out one of Wesleyan’s new EnergyPods in the Science Library Oct. 18.

Newly installed in both Olin and the Science Library are what appear to be lounge chairs enclosed by white spheres of plastic. These sleek, futuristic-looking machines are built for the sole purpose of squeezing in that midday, mid-study power nap—a recharging center for the mind. The EnergyPod, as it’s called, is the brainchild of a company called MetroNaps and the very first of its kind. Donated by co-founders and Wesleyan alumni Christopher Lindholst ’97 and Arshad Chowdury ’98, these pods are designed to create the ideal energy enhancing environment. The EnergyPod has a 20-minute timer.

“There is a tremendous amount of research that supports the notion that a 20-minute midday nap can rejuvenate people. It improves memory, learning and mood and can boost productivity by up to 30 percent,” Chowdury said in a BBC article prior to the EnergyPod’s release.

Features include a reclined seat to take pressure off the lower back and legs, an adjustable visor that creates a shield of privacy from the outside, and soothing sounds and rhythms acting as relaxing white noise. A built-in 20 minute timer allows for nap goers to wake up with ease to a combination of slight vibrations and ambient lighting.

The workloads and busy schedules of college life can be just as exhaustion-inducing as those of MetroNaps’ usual corporate customers. For Yekaterina Sapozhnina ’16, who has spent a large portion of her past few days finishing up midterms, a few minutes of sheer relaxation after lunch on Oct. 18 was all she needed to make it through her afternoon classes. “After sitting in the chair and closing the pod, I fell asleep almost instantly. I really didn’t even realize how badly I needed to rest until I sat up and felt much better,” she said. “Everybody should at least try it out.”

According to Nancy Collop in a 2010 U.S. News & World Report article, “Most people don’t get enough sleep. And for those people, a nap will clearly help. The most important factor is duration, and it’s well-accepted that short naps are good.”

In the corporate world, this concept is catching on. MetroNaps’ clientele includes household names such as Google, AOL/ Huffington Post and Zappos.

Taraba Co-Edits Past or Portal In the age of ubiquitous access to information, library special collections and archives have received renewed attention through digitization projects designed to share collections with the world at large. Yet these materials also offer opportunities for student learning though direct engagement with rare or unique items. While special collections and archives have largely been used by advanced researchers and scholars, an increasing number of undergraduate courses are taking advantage of these materials as guides in the instructional process.

Through 47 detailed and compelling case studies, Past or Portal? explores a variety of successful instructional models featuring a wide range of engagement methods with special collections and archival materials.

The 336-page book is available for sale online. 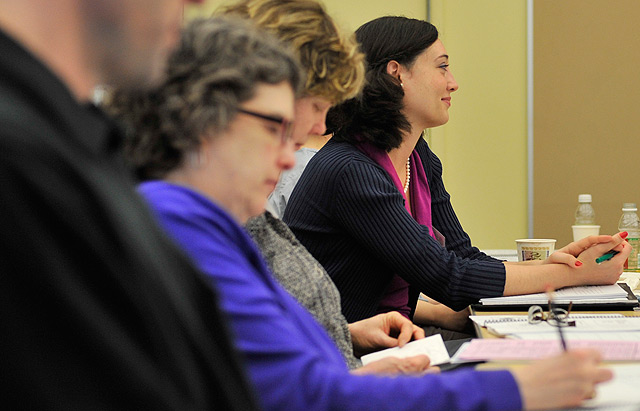 The New England Archivists organization held its Spring 2012 conference at Wesleyan March 23-24. More than 225 archivists from around the region attended the meeting.

END_OF_DOCUMENT_TOKEN_TO_BE_REPLACED

On Feb. 21, Melissa Behney joined the staff at Olin Library as a reference librarian. The Friends of Wesleyan Library hosted a book sale Oct. 15. The organization raised more than $3,000 to support library events, programs and the library collection.

END_OF_DOCUMENT_TOKEN_TO_BE_REPLACED

Konerding Appears in May 17 Millionaire Show Erhard Konerding, documents specialist in Olin Library, was a contestant on "Who Wants to Be a Millionaire." His show aired at 10 a.m. May 17 on WTIC (FOX). Olin Library staff members gathered to watch their colleague answer a series of questions.

END_OF_DOCUMENT_TOKEN_TO_BE_REPLACED Documents Librarian Erhard Konerding will appear on the April 14 broadcast of ABC’s “Who Wants to Be A Millionaire."

Will Erhard Konerding become a millionaire?

The Wesleyan librarian may know already, but the rest of us will have to wait until a mid-May broadcast of ABC’s “Who Wants to Be A Millionaire” quiz show. Originally scheduled for April 14, the broadcast is now scheduled for Tuesday, May 17 at 10 a.m.

Konerding, a documents specialist in Olin Library, is a contestant in an episode that taped Nov. 17, 2010, in New York City. The top prize is $1 million.

Renowned on campus for his handlebar mustache, Konerding has previously been a contestant on three other television game shows –”Jeopardy” (1994), “Remember This” (1996) and “History IQ” (2000).

One of his opponents on “History IQ” was Leszek Pawlowicz, Wesleyan ’75, who has been called “the Michael Jordan of game shows” in The New York Times Magazine. Pawlowicz won “Jeopardy” in 1992, among many other victories.

“I won a mountain bike, Leszek got the $5,000,” said Konerding. “He went on to take second place overall in the tournament.”

By agreement with ABC-Disney, contestants on “Millionaire” may not reveal how they performed prior to broadcast.

“Any proceeds do not come until 30 days after the show’s air date, so there is that incentive to keep quiet,” says Konerding, who joined the university staff in 1972 and received an MALS from Wesleyan in 1982.

In any event, he has no immediate plans to quit his day job at Olin: “I’ll definitely stay at least until my 40th anniversary party,” he said. County Atlas of Middlesex, Connecticut, from actual surveys by and under the direction of F.W. Beers. Published in 1874.

“We’d love to make the book accessible to the Wesleyan community and outside researchers, but we can’t do so without damage to the book until its physical condition is stabilized,” explains Pat Tully, university librarian. “It needs to be preserved so that it is usable by current and future scholars.”

To help old books find a home back on the shelves, The Friends of the Wesleyan Library created an “Adopt A Book Program” to support the library’s conservation program. The program offers funds to repair and preserve unique or rare treasures in the library’s collections.

Though many of the books are in fine condition, years of use inevitably causes wear and tear, book bindings decay and their paper deteriorates.

Michaelle Biddle, head of preservation services at Olin Library, will oversee the repair work. Each “adopted” book, including the Middlesex atlas, will take several hours

END_OF_DOCUMENT_TOKEN_TO_BE_REPLACED

Friends of Wesleyan Library Sell More than 2,000 Books at Benefit The Friends of Wesleyan Library, a group of faculty, staff, students, alumni and community members, helped raise more than $4,000 for the library during its third annual book sale Oct. 2 in Olin Memorial Library. The organization sold more than 2,000 books and other media throughout the day. 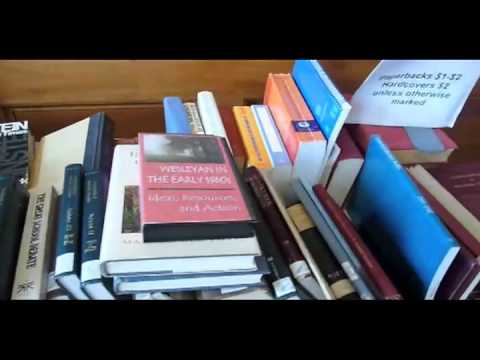 Students browse the "Arts" and "Music" sections. The Friends collect donations of books from Wesleyan and local community members, and also sell books that are withdrawn from the library. After the sale, the Friends donated 16 boxes of books to Capital Preparatory Magnet School in Hartford, Conn. The sale is open to the local community and includes a silent auction, held in the Smith Reading Room. Book dealers from New York and Massachusetts attended the silent auction, which included 35 collectable titles. People could register and place bids on the books. The most popular items are art books. (Photos by Emily Brackman ’11)

In the article, Hobbs and Klare explain how librarians and information technologists at Wesleyan were provided with an opportunity to design a new study space for students during a library renovation. They teamed up to learn ethnographic techniques and apply them by incorporating student input into the new space, rather than making decisions based on traditional methods.

Using this approach produced enlightening information about students’ differing behaviors and use of campus space that the team used extensively in planning the new design.

The Nathan Comfort Starr Collection of Arthuriana is one of Wesleyan’s great hidden treasures. It comprises of more than 900 volumes related to the legends of King Arthur and the knights of the Round Table.

The Friends of the Wesleyan Library funded a three-month, full-time librarian to catalog the collection. Rare book cataloger Samantha Klein began the task in January 2010, and finished in March.

The collection was the 1981 bequest of Nathan Comfort Starr,

END_OF_DOCUMENT_TOKEN_TO_BE_REPLACED

Suzy Taraba, University Archivist and head of Special Collections, received a grant from the George Frederick Jewett Foundation for the purpose of upgrading its exhibition area, located outside Special Collections & Archives in Olin Library. The $50,000 award will be applied Jan. 15, 2011 through Sept. 15, 2012.

“The grant will enable us to improve the lighting in the area, and allow us to install new cases that are more secure and attractive, and that offer some humidity control,” Taraba says.