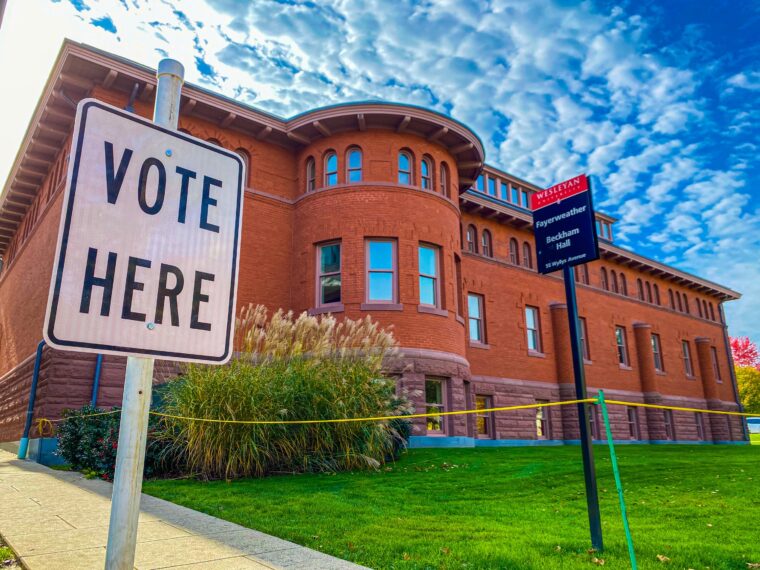 The ALL IN Campus Democracy Challenge is a national, nonpartisan initiative of Civic Nation, which strives for a more inclusive democracy.

While civic participation is embedded in Wesleyan’s DNA, this level of turnout is due to a sustained voter registration effort, said Diana Martinez, Assistant Director, Jewett Center for Community Partnerships.

“We are always looking for ways to bring the students together,” Martinez said.

In addition to periodic voter registration drives (including efforts to help students register in their home states), student groups encouraged each other to get to the polls, and Martinez’s team made sure that same day voter registration was painless.

The act of voting for a student living on campus can be complicated, Martinez said. This past election, students were extremely conscious of where their vote would have the most impact – back in their hometowns or in Middletown itself. The question of whether it was appropriate to vote in Middletown at all came up for students – are they just visitors in this community or are they full-fledged participants?

“They hadn’t been having these conversations before,” she said.

Despite Wesleyan’s success, Martinez feels that there is still work to be done. She hopes to impress the importance of civic participation on the students who were too young to vote, international students, and students are undocumented. “That is a growth area for the university,” she said.

Thomas Holley ’22 reflected on the importance of his vote to the Wesleyan Connection after casting his vote in 2020. “I voted in the 2018 midterms, but this election feels much more important. This statement comes from an unbelievable point of my privilege, but this is the first-time political events have directly impacted my daily life. In 2018, I enjoyed voting, but going to the polls did not have the same sense of necessity,” Holley said in 2020.

Martinez hopes, through her work, to continue to encourage students like Holley to be a regular voter. “Every vote counts,” she said.