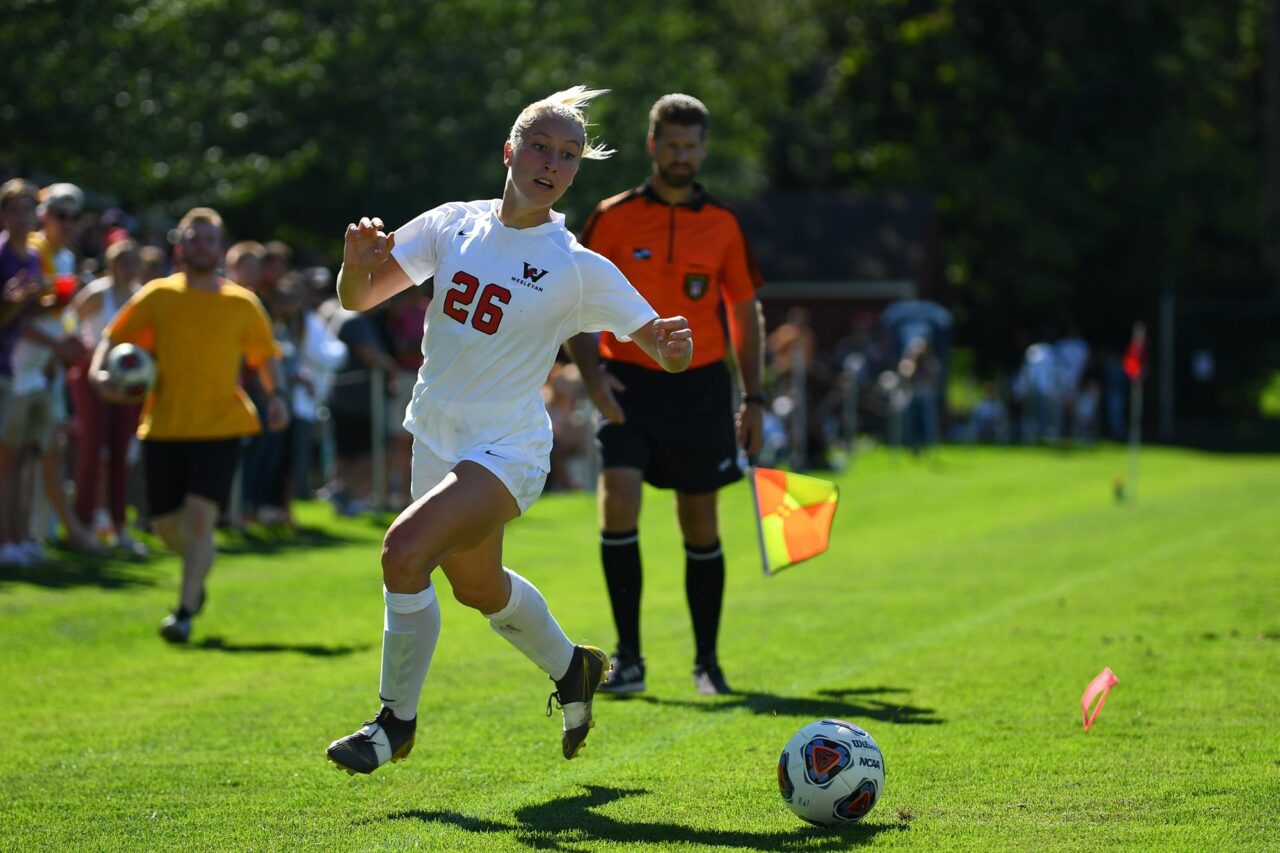 There are moments in the careers of many great athletes where they take control of the game – victory is within their grasp and they will not be denied. Michael Jordan dunking in the NBA Finals, Derek Jeter diving into the stands to catch a fly ball at Yankee Stadium, Simone Biles defying gravity at the Olympics – just to name a few.

Grace Devanny ’23, a forward on the women’s soccer team, had her moment against eighth-ranked MIT in the NCAA Division III Quarterfinals. She had opened the scoring early in the game with a goal. MIT tied and sent the game to overtime. Devanny kicked the winner to propel Wesleyan into the Final Four.

“She was running at maximum speed in minute 91 of the game. We hadn’t taken her off the field. She was running the same speed then as she did in minute 5. It’s not that she’s not tired. She was motivated from within. Grace wanted to do well for herself and for her team,” said women’s soccer coach Eva Meredith.

For Devanny’s stellar 2020 season, where she scored 12 goals and contributed nine assists in 21 games, she was named a First Team NCAA Division III All-American by United Soccer Coaches. She is the first Wesleyan women’s soccer player to achieve that honor. She had already been named the 2021 NESCAC Player of the Year. “She is one of the fastest and most athletic, if not the most athletic to come through here,” Meredith said.

When you talk to Devanny about her magical season, the first thing she mentions are her teammates. “I have never been on a team like this one where I have enjoyed every single person on the team … I just love every one of them and I think that’s what made this so special

I think there are a lot of factors that played into my success. I was surrounded by exceptional players and I genuinely think a lot of them deserve the exact same title as me,” Devanny said.

She found out about her honor right before the Semifinals and kept it to herself for a couple of days because she didn’t want to distract her team’s efforts. “She really is a great teammate. She doesn’t want to take all the credit,” Meredith said.

Last summer in preparation for the season, Devanny lifted weights four days a week, ran three days, and had soccer practice three times a week. Still, having taken the spring off from soccer and with a long layoff because of COVID, she wasn’t sure that she’d be able to repeat the success of her first year at Wesleyan. “She came back physically prepared – fit and strong. We hadn’t played soccer in a while, but she did all that she could do to be in peak physical shape,” Meredith said.

Devanny grew up immersed in the sport. She began playing alongside her brothers as far back as kindergarten. (Her twin brother Liam ’23 was a second-team All-NESCAC goalkeeper on the men’s soccer team. An older brother Trevor ’19 also played soccer for Wesleyan. Her fourth brother Evan played for Stonehill College and graduated in 2016.) She recalled happy family time spent at all manner of sporting events. “My three brothers are kind of like my hype people,” she said.

In December, Devanny will get some time to relax – not too much, she likes the structure of balancing sports and academics – then she’ll be back at it in January for track season, running the 400 meters. “I am hoping to be a force to be reckoned with in two sports,” Devanny said.

Devanny, a double major in Psychology and Neuroscience and Behavior, plans to attend medical school after leaving Wesleyan. “It was something I wanted to do at a young age. My dad is a doctor, so it was on my mind. As I grew up, I really excelled in STEM classes and I want to help others. Once I set a goal, I really want to get there,” she said.

Meredith, who praised Devanny as an athlete and a scholar, believes in her promise. “One of the things I think that you learn from sports is how to perform under pressure. I think I’d like a doctor who can do that,” Meredith said. “She is just a competitor.”

Wesleyan Community Comes Together To Celebrate Reunion and Commencement 2022

“A Very Intimate Process:” Farina ’23 and Chaffee ’00 on curating the Senior Thesis Showcase