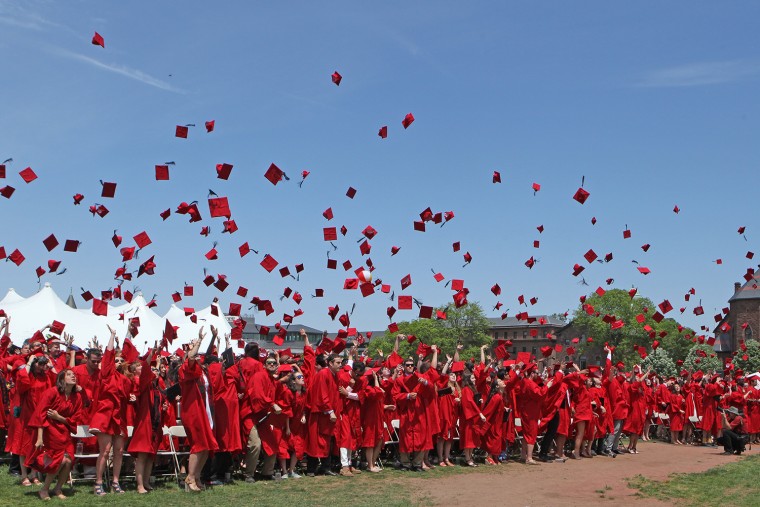 President Michael Roth ’78 announces that Wesleyan University will recognize three extraordinary individuals during the 190th Commencement on Sunday, May 22, 2022.

The honorary degree recipients will be Freeman A. Hrabowski III, president of the University of Maryland, Baltimore County, who will also deliver the Commencement address; Joseph J. Fins ’82, physician and professor of medical ethics and professor of medicine at Weill Cornell Medical College; and Gloria Steinem, a trailblazing leader of the American feminist movement in the late 1960s, award-winning journalist, and political activist.

Unfortunately, Rita Moreno, who was previously announced as a recipient of an honorary degree, is no longer able to attend because of an unexpected scheduling conflict. Ms. Moreno recorded this video message expressing her warm congratulations to the Class of 2022.

“All three of these individuals are remarkable change-makers in their respective fields of academics, health, and activism who continue to break barriers as they fight for representation and access for underrepresented communities,” Roth said.

Freeman A. Hrabowski III is a writer and passionate advocate for underrepresented groups studying in STEM fields; he has served as president of the University of Maryland, Baltimore County since 1992. His research and publications focus on science and math education, with special emphasis on minority participation and success. He chaired the National Academies’ committee that produced the 2011 report, Expanding Underrepresented Minority Participation: America’s Science and Technology Talent at the Crossroads, and in 2012 was named by President Barack Obama to chair the President’s Advisory Commission on Educational Excellence for African Americans. His 2013 TED talk highlights the “Four Pillars of College Success in Science.”

TIME magazine named Hrabowski one of America’s 10 Best College Presidents in 2009, and one of the “100 Most Influential People in the World” in 2012. He serves as a consultant to the National Science Foundation, the National Institutes of Health, the National Academies, and universities and school systems nationally. With philanthropist Robert Meyerhoff, he co-founded in 1988 the highly influential Meyerhoff Scholars Program for minority students pursuing advanced research and careers in science and engineering. His recent election to the National Academy of Engineering reflects his leadership at UMBC and his tireless efforts at a national level to increase diversity in STEM fields.

Hrabowski has authored numerous articles on success and diversity in higher education. He has co-authored two books focused on raising academically successful African American students, Beating the Odds (1998) and Overcoming the Odds (2001). His 2015 book, Holding Fast to Dreams: Empowering Youth from the Civil Rights Crusade to STEM Achievement, describes the events and experiences that played a significant role in his development as an educator and leader. His most recent book is The Empowered University: Shared Leadership, Culture, Change, and Academic Success (2019).

Hrabowski graduated from Hampton Institute (now Hampton University) with highest honors in mathematics. He received his MA in mathematics and Ph.D. in higher education administration/statistics from the University of Illinois at Urbana-Champaign.

Dr. Joseph J. Fins ’82, is an accomplished physician, bioethicist, academic, and a great champion of public health and the rights of people with brain injury. He is the E. William Davis, Jr. MD Professor of Medical Ethics, professor of medicine, and chief of the Division of Medical Ethics at Weill Cornell Medical College. Fins is an attending physician and the director of medical ethics at New York-Presbyterian Weill Cornell Medical Center, on the adjunct faculty of Rockefeller University, and the Solomon Center Distinguished Scholar in Medicine, Bioethics, and the Law and a visiting professor of law at Yale Law School. Dr. Fins is an elected member of the National Academy of Medicine of the National Academies of Sciences, a fellow of the American Academy of Arts and Sciences, and an Academico de Honor of the Royal National Academy of Medicine of Spain. He was appointed by President Clinton to the White House Commission on Complementary and Alternative Medicine Policy and serves on the New York State Task Force on Life and the Law by gubernatorial appointment.

Dr. Fins is the author of Rights Come to Mind: Brain Injury, Ethics and the Struggle for Consciousness (2015)and a co-author of the 2007 Nature paper describing the first use of deep brain stimulation in the minimally conscious state. As a scholar, he is committed to fostering a productive dialogue between the sciences and the humanities.

Dr. Fins received his MD from Cornell University, completed his residency and fellowship at the New York Hospital-Cornell Medical Center, and served as an associate for medicine at the Hastings Center. He is president of the International Neuroethics Society, past-president of the American Society for Bioethics and Humanities, and on the Hastings Center Board of Trustees. He is a former chair of the Alumni Association and a trustee emeritus of Wesleyan.

Gloria Steinem is a fearless political activist, feminist organizer, and writer who has dedicated her life and work to dismantling patriarchy and other forms of social injustice. In 1972, she co-founded Ms. magazine, and remained one of its editors for 15 years. She continues to serve as a consulting editor for Ms. and was instrumental in the magazine’s move to join and be published by the Feminist Majority Foundation. In 1968, she helped to found New York magazine, where she was a political columnist and wrote feature articles.

Steinem helped establish the Ms. Foundation, one of the first and largest women’s funds in the United States, the Women’s Media Center, a nonpartisan media organization dedicated to telling the stories of women and girls, and the National Women’s Political Caucus, a group that continues to work to advance the numbers of pro-equality women in elected and appointed office at a national and state level.

In 1993, her concern about child abuse led her to co-produce and narrate an Emmy-winning documentary for HBO, Multiple Personalities: The Search for Deadly Memories. She co-produced an original 1993 TV movie for Lifetime, Better Off Dead, which examined the parallel forces that both oppose abortion and support the death penalty. Ms. Steinem is the host and executive producer of the Emmy-nominated VICE series, WOMAN.