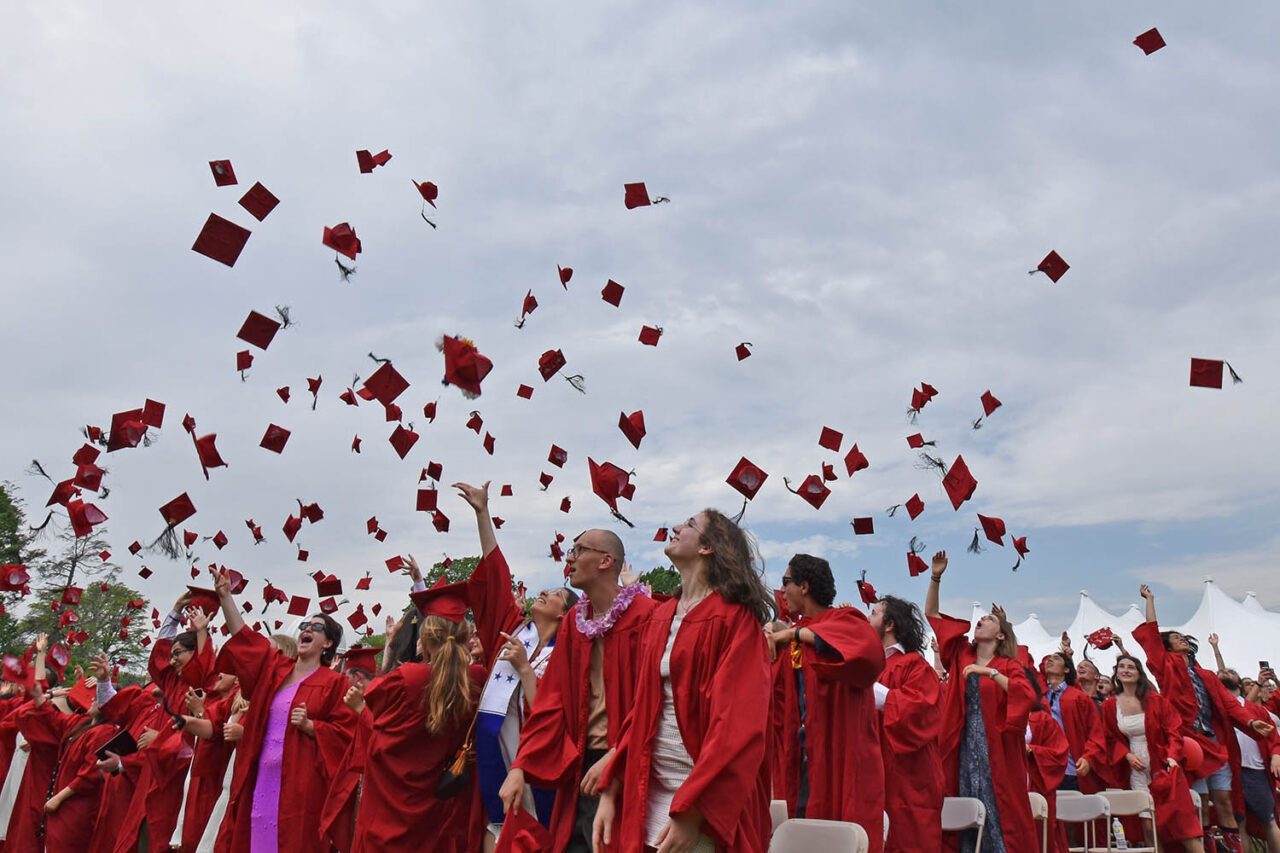 On a joyous day marked by ritual and ceremony, Wesleyan University bid a fond farewell to the accomplished Class of 2022 at its 190th Commencement on Sunday, May 22.

“I am extremely excited. I’ve been ready for this day,” said Ama Hagan ’22. “College is full of trials and tribulations, but there is a lot of success headed (our) way.” As students convened on Foss Hill to get ready to walk to the ceremony, they took photos of one another and talked to friends and family. Some took a moment to share their future plans. They spoke of Wesleyan as a place where learning to overcome problems and to set one’s own path was an important part of the experience.

Martha Wedner ’22 and Milena Sigerson ’22 were hanging out together seeking a bit of shade before lining up for the Commencement. The friends expressed what was a common theme for many of the students—excitement for the future and a bit of melancholy at leaving the University behind.

“I’m feeling like college time just flew by. I’m feeling a little existential, but I’m feeling ready and really excited for the things to come,” said Wedner, who hopes to become a Hollywood agent.

“I’m excited, but I am really sad about it. But it’s time,” said Sigerson, who will be teaching English in Spain next year. Jordan James ’22 spent a few moments with his aunt and sister before the ceremony. He felt lucky to have met so many supportive friends and faculty members. “I feel great. Hot, but great. It is the culmination of a fantastic experience,” James said.

Paris Arnett Jensen ’22 was excited because her grandparents flew from Denmark to see her graduate—the first time she’s seen them since the beginning of the global pandemic that was a hallmark of the Class of 2022’s experience. “I feel like I’ve had especially wonderful professors—people who are brilliant and really thoughtful,” said Jensen, who will be teaching English culture in Paris.

Shortly before 11 a.m., drums summoned forth the graduates, who streamed in a Cardinal red wave across Foss Hill. The graduates accepted applause (and the occasional hug) from faculty members at the bottom of the hill before crossing Andrus Field to bathe in the glow of their proud families. “I feel a mixture of joy and sadness,” said Jane Walker, whose son Ethan was graduating. “The little boy is no longer and we are on the cusp of when he is going to be on his own and making decisions on his own.… He made the most of his time at Wesleyan.”

President Michael S. Roth ’78 welcomed the graduates with the reminder that just two years ago the campus community had to practice avoidance, had to learn without contact, removing two of the very things that help to make a Wesleyan education special. “Today’s ceremony marks a transition in your lives from students to alumni, closing out a truly extraordinary four years—a good portion of which will be indelibly stamped on our collective memory for their many difficulties and your uplifting response to them,” Roth said.

Senior Class Speaker Kalli Jackson ’22 recalled her first day of classes on the rainiest day of September. She’d forgotten to bring an umbrella and was trudging from Bennet Hall to Fisk Hall, getting soaked. A complete stranger approached her and without saying a word, shared her umbrella. It was the first of many instances where Jackson realized that the best part of Wesleyan often happened when no one was looking.

“Stepping out into a post-Wesleyan world means not quite knowing what to expect. But, the one thing I do know is that wherever we end up once we go, we will all be the person who shares their umbrella with a stranger. When we leave this campus as students for the very last time, there will be a person, an office, a city that gets just a little better, right when no one’s looking,” Jackson said. (Read Jackson’s entire speech.) In his remarks to the Class of 2022, President Roth addressed how universities can respond to the nation’s long-standing culture wars. He hopes that a Wesleyan education provides students with the tools to stand against prejudice and cruelty and to be mindful of self-righteousness and moral satisfaction.

“To be true to our academic and civic purposes, Wesleyan’s mission reminds us that we must become practical idealists, making peace where we can by promoting open inquiry and free expression. We must defend those who want to participate in this endeavor from threats of violence or marginalization while cultivating respect for intellectual diversity. By practicing culture peace, we will be more open to discovery, including the discovery that it’s time to change our minds and listen more carefully to others,” Roth said. “Practicing culture peace at a time of culture war is not easy; but in the long run, it’s the antidote we need to today’s cultivation of conflict.” (Read President Roth’s entire speech.)

The honorary degree recipients urged graduates towards leadership and to use their Wesleyan educations to think in an interdisciplinary, holistic way out in the world.

Dr. Joseph J. Fins ’82, who received an honorary degree of Doctor of Humane Letters, noted that a constant from his days at Wesleyan was the symbolic Church Street divide between the sciences and humanities—on one side of the street is Olin Library, on the other, the Science Library. He urged the graduates to take every opportunity to bridge disciplines, recalling how he would study chemistry at Olin and read Joyce’s Ulysses at the Science Library. “Cross your Church Street. Make new connections to address problems that cross disciplines. Apply your superb—and empowering—Wesleyan education to pressing challenges and make a difference in our all too troubled world,” Fins said. (Read Fins’s entire speech.)

As a self-confessed “hope-a-holic,” political activist Gloria Steinem loves graduations. She sees them as both an end and a beginning, a celebration of lifelong learning and friendships. Wesleyan holds a particularly special place for her. She was close with Sheila Tobias, an associate vice provost who helped create one of the first women’s studies programs at the university.

Steinem encouraged the graduates to imagine the futures that they will create. “You are already the generation of ‘Black Lives Matter’ and ‘Bans Off Our Bodies.’ You know that the amount of melanin or hormones in our bodies doesn’t change the fact that each of us arrives on this Earth as a unique miracle; one who could never have happened before and could never happen again,” said Steinem, recipient of an honorary degree of Doctor of Humane Letters.

Still, she said, a third of the country is challenged by gender and racial justice. “Diversity and democracy are like a tree, they grow not from the top down, but from the bottom up. Remember that what you do every day matters—what you say, what you encourage, what you oppose, what you imagine, what you love with all your hearts—and that includes laughter,” Steinem said. (Read Steinem’s entire speech here.)

Freeman A. Hrabowski III met with four Wesleyan students—“my kitchen cabinet”—in preparation for his Commencement address. He encouraged the graduates to know their own story, to know where they came from and the sacrifices made to allow them to graduate from Wesleyan. “The older I get, the more I realize that there is nothing more important than our families,” Hrabowski said.

Hrabowski acknowledged that the graduates will be entering a world full of turmoil, but that the Wesleyan values of independence of mind and generosity of spirit will help them contribute to solving the problems of humankind. “I challenge you to be bold and to plot your own path … never, never, never give up,” Hrabowski said. (Read Hrabowski’s entire speech here.) The University took the opportunity to recognize the accomplishments of several of its faculty members. The ceremony concluded with a word of blessing from Rev. William J. Wallace, University Catholic chaplain, followed by the singing of the Alma Mater and the Wesleyan Fight Song. “May you stay wondrously ‘Wesleyan weird,’ do good, remain loyal and true. As you leave Wesleyan, may Wesleyan never leave you,” Wallace said. The most important lessons at Wesleyan don’t often come in the classroom. For Karina Burbank ’22, her time at Wes allowed her to be more open with people, to learn to, to use her own phrase, grow up. “My experience at Wesleyan was unexpected in a really good way,” Burbank said. “(I would tell my classmates) to keep fostering your connections with your classmates.… I made friends I wouldn’t have expected to. That was one of the best parts of Wesleyan for me.”

previousSteinem: "Hope is a form of planning"