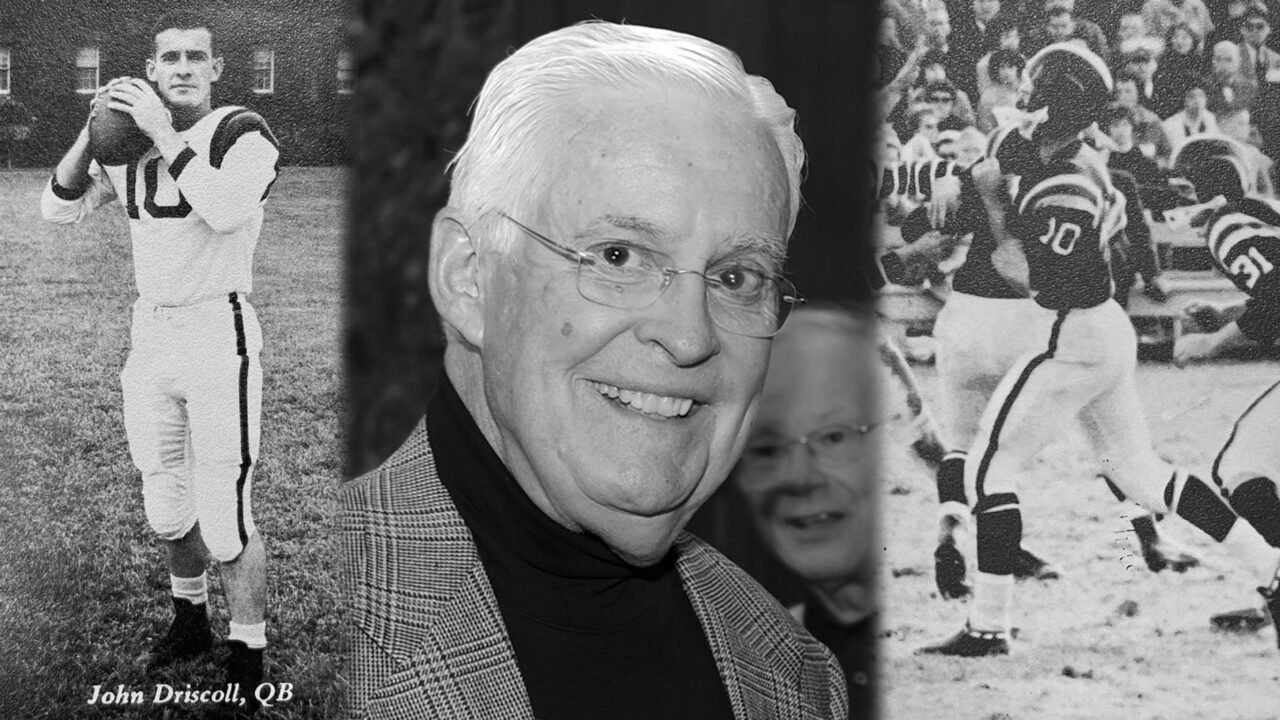 John Driscoll ’62, who oversaw Wesleyan’s alumni relations programs for more than three decades, died after a long struggle with Parkinson’s disease on June 12. He was 82 years old.

A resident of Cromwell, Conn. and a former longtime resident of Middletown, Driscoll was the older son of the late James Douglas Driscoll and Loretta (Haggerty) Driscoll. Born in Brooklyn, New York, on March 4, 1940, he was raised in Westchester County, though he spent many summers with his Fitzgerald cousins in Marblehead, Massachusetts. A graduate of Pleasantville High School, John earned his BA from Wesleyan as a member of the first class of the College of Social Studies.

Driscoll prided himself on being the worst quarterback ever to play under legendary Wesleyan football coach Norm Daniels. Over the next 20 years, he studied as a Jesuit seminarian and received an MA in political science from Fordham University, taught at Canisius College in Buffalo, N.Y., and was employed as a civil servant for the U.S. Office of Education and Civil Aeronautics Board in Washington, D.C. In Buffalo, he met Gina Lucchesi; they married in 1969 and started a family before ultimately returning to his alma mater in 1982. There, as Wesleyan’s Alumni Director for 33 years, he found his calling—connecting people and building community. An engaging speaker, storyteller, and writer, Driscoll exuded warmth, good humor, and could find common ground and shared interests with everyone. One of his favorite roles was teaching the “Wesleyan Fight Song” to incoming students.

Upon his retirement in 2015, he was recognized as an Alumni Director Emeritus. He and Gina Driscoll received the Raymond E. Baldwin Medal for extraordinary service to Wesleyan in 2017. A superfan of Wesleyan Cardinal Football, John Driscoll attended as many games and practices as he possibly could. His full-throated “Let’s go, Wes!” was unmistakable from behind the endzone. A thrill of his life was the 2019 naming of Driscoll Gate on Andrus Field in his honor.

“John had the great gift of making everyone in the Wesleyan community feel welcome and appreciated. We will hold him warmly in our memories as an inspiration and a reminder of what it means to act with generosity of spirit,” wrote Wesleyan President Michael Roth.

In both his work and home lives, Driscoll was often late because he stopped to chat at length with someone on the way. In Middletown, he was a member of Kiwanis and the Conversational Club. He eagerly researched Middletown, Wesleyan, and Civil War history. Before Parkinson’s, he was an avid distance runner, completing three marathons and countless shorter road races. He loved travel, playing golf with Gina and son Douglas, and was a true believer in the power of a short nap, anytime, anywhere. He enjoyed a good walking stick and bestowing nicknames upon family and friends. In addition to Gina, John Driscoll is survived by his children, David Driscoll (Willow Cheeley), Laura (James) Taft, and Douglas Driscoll; his sister-in-law Grace Haymes and family; grandchildren Lenora, Clara, and Eli; two nieces, a nephew, and Fitzgerald and Driscoll cousins. He was predeceased by his brother and sister-in-law, Henry Driscoll and Susan (Dahlgren) Driscoll.