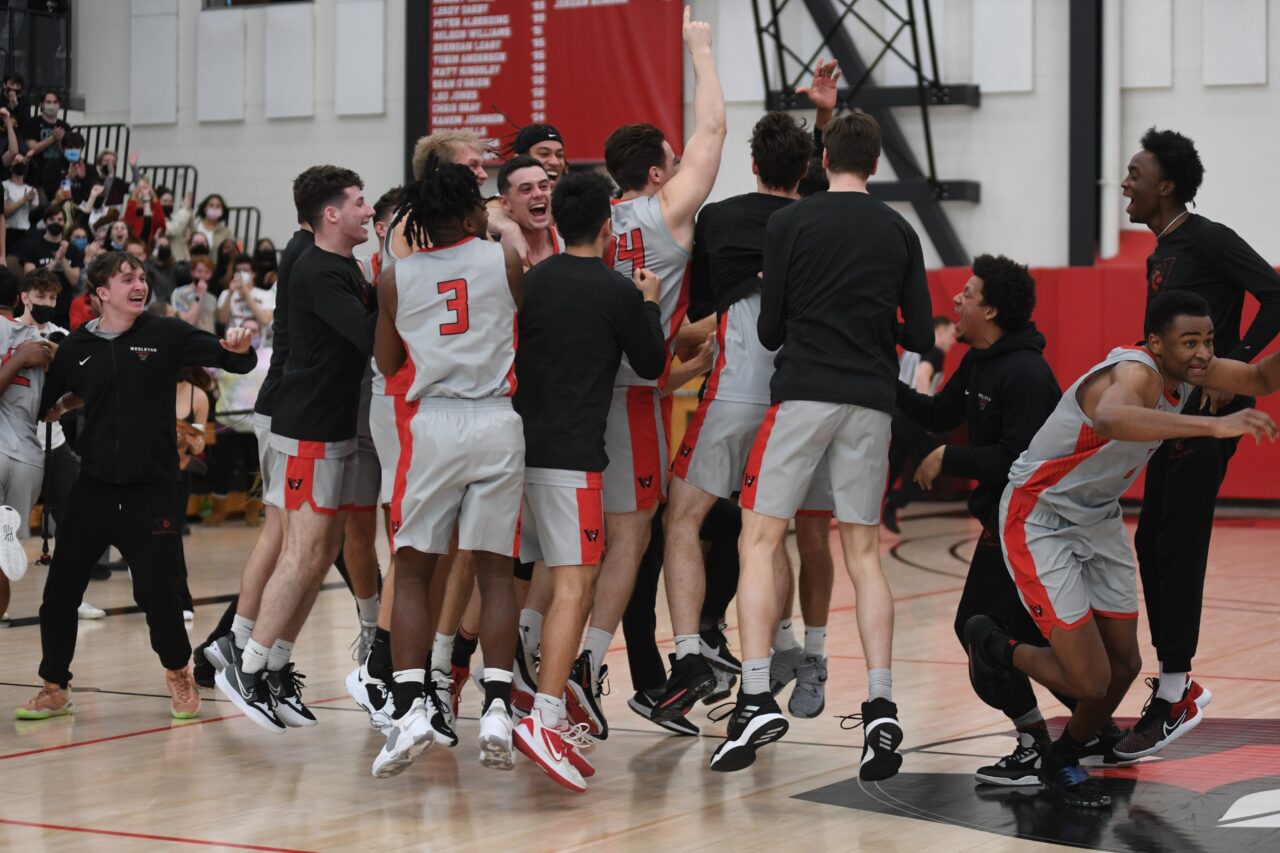 In a matchup that had all the makings of an instant classic heading in, the thousand-plus on-hand were gifted a game for the ages as these two storied rivals battled for 45 minutes in a back-and-forth contest that featured 20 lead changes and 16 ties, all of which culminated on center court with the Wesleyan men’s basketball team celebrating as NESCAC Champions.

The top-seeded Cardinals (24-3), playing in front of packed Silloway Gymnasium for the second straight day, locked horns with the Williams College Ephs (16-4) in a game that had everything. Neither side led by more than seven points throughout. Even after Wesleyan went up 78-72 with seven seconds left in overtime, Williams banked in a three with three seconds left and after two missed Cardinal free throws, had a halfcourt heave land just a few feet short at the buzzer, which sent the Wesleyan players and faithful into all-out hysteria celebrating a 78-75 title-clinching victory on Feb. 27.

This marks the second NESCAC Championship in program history and the team’s first since 2015. Making their third NESCAC title game appearance, all of which coming within the last seven years, a terrific regular season paid major dividends as the top-seeded Cardinals played the championship weekend on their home floor. And just one day removed from a thrilling 70-67 semifinal win over Trinity, a second straight three-point playoff win for Wesleyan sealed a terrific postseason run, who will now head to the NCAA Tournament.

Gaining the NESCAC’s automatic bid into the NCAA Tournament as league winners, Wesleyan now prepares for the program’s fourth trip to the national tournament where the Cardinals last played in 2018.

The third meeting between the Cardinals and Ephs had the billing perfectly made for a NESCAC title game as both sides were playing at full strength for the first time this season, with both prior meetings in 2021-22 featuring injuries and COVID inactives throughout each lineup.

As fans poured into Silloway right up to the opening tip, they witnessed the Cardinals score on their first two trips down the floor. Jordan James ’22 hit a hook shot in the lane on the game’s first possession while Preston Maccoux ’23 hit a floater from the baseline to make it 4-2 Cardinals in the early going.

Williams answered right back, silencing the home crowd with a 9-2 run as Jovan Jones scored five straight points before Cole Prowitt-Smith hit a tough jumper in the paint over a Cardinal defender and Brandon Roughley bullied his way for two points deep in the lane to make it 11-6 Ephs just 5:11 into play.

A Maccoux three-pointer was the start of series of point-producing possessions for the Cardinals as Gabe Ravetz ’23 followed with a driving floater and James connected once more on a hook shot from down close. Antone Walker ’22 then came off the bench and tore up the Williams defense for seven consecutive Cardinal points, the last of which coming on a pull-up jumper that made it 20-17 Cardinals midway through the first half.

However, the game kept seesawing from one side to the other as Williams followed with a 7-0 run to claim a 24-20 lead with eight minutes left in the stanza. Balanced scoring from the Cardinals kept the score close as this time it was Shackylle Dezonie ’23 who got involved, converting a three-point play on a drive to the hoop followed by a mid-range make that lowered the gap to one. Then a few minutes later, it was Maccoux lofting a pass to James who rose up and dunked to give Wesleyan a 27-26 advantage.

It was a quick start to the second half for Wesleyan as Maccoux grabbed an offensive rebound, went back up for two points and was fouled to convert a three-point play. Dezonie then connected off a feed from Nicky Johnson ’25 and suddenly it was 34-31 Cardinals less than a minute into the half.
The lead changed hands several times before Wesleyan rattled off an 8-0 run where Johnson hit from three, Walker converted an and-one and Maccoux drove the lane for two and suddenly the Cardinals were up 46-39, holding the largest lead of the game for either side at seven points.

That seven-point cushion was short-lived as Brandon Arnold stole an errant pass and dribbled all the way uncontested for a layup which ignited the Williams bench and helped turn the tables for a 9-0 Ephs run.

In the face of the hard-charging Ephs, the Cardinals went to Walker as the senior, 1000+ career point scorer hit a key basket in the paint to stymie the Williams run. James then threw down a thunderous alley-oop off an inbounds as Maccoux lofted a pass for James who timed his jump perfectly, finishing the play with a dunk that was met with a deafening roar from the home supporters.

View additional photos of the game below and in this Wesleyan Athletics article.  (Photos by Sterling Rodas ’23) previousDonors Reflect on Why They Support Wesleyan Athletics