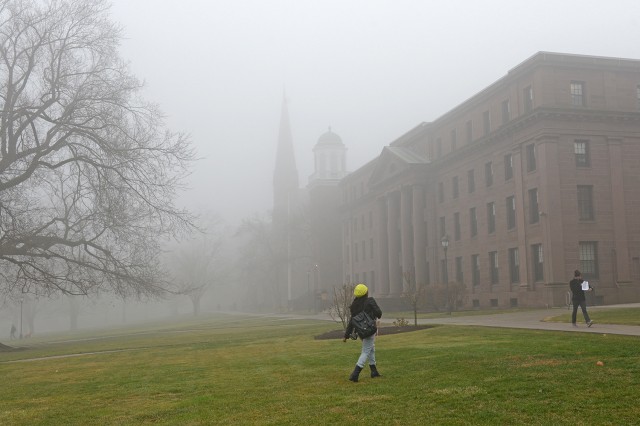 Due to the recent Russia-Ukraine crisis, this media roundup will mention related content first:

In Meduza, Victoria Smolkin, associate professor of history, discusses the historical claims Putin made in his speech before invading Ukraine. “Fantasy is not history, and it’s not politics. One can lament—as Putin does—that Soviet politics was not ‘cleansed’ of the ‘odious’ and ‘utopian’ fancies ‘inspired by the revolution,’ which, in part, made possible the existence of contemporary Ukraine.” (Feb. 24) And in Politico, Smolkin explains how Russian soldiers may be feeling confusion and ambivalence, especially in their encounters with Ukrainian civilians. (March 3)

In The Conversation, Peter Rutland, Colin and Nancy Campbell Professor in Global Issues and Democratic Thought, explains how the daily life of ordinary Russians is being impacted by economic measures imposed by the international community in response to the invasion of Ukraine. “The economy is likely to plunge into recession, and many Russians are already experiencing the effects of the sanctions.” (Feb. 28)

Rutland also discusses the signs of unease in the Russian military in PONARS. “The Russian president’s ultimatum to the United States in December has caused the biggest international crisis in Europe since the dissolution of the Soviet Union,” Rutland writes. “A decision to launch new military action against Ukraine would have a momentous impact on Russia’s relations with the West and on Russian society.” (Feb. 14)

Yuliia (Julia) Kulchytska ’24 speaks to WTNH Channel 8 about Russian attacks on her home country, Ukraine. “As I go to classes, I cannot even concentrate because just the fact there is a war going on in my country screaming in my head,” she says. (Feb. 25)

On NBC Connecticut, Kulchytska discusses the Russian-Ukraine Crisis at Hartford’s Ukrainian National Home. “It’s heart-breaking to be 6,000 miles away from your country when your friends and your family have to go through hard stuff,” Kulchytska says. “I’ve been trying to calm myself down because doing this on my own is very hard and having a community here and knowing that there are some people who can relate to this problem is somewhat relaxing.”

Kulchytska also explains to MSN how she wanted to go home when she first heard about the attacks but decided to stay and raise awareness in Connecticut. “I just realized that I’m panicking more than my parents and my little sister. They live in uncertainty and it’s probably a self-defense mechanism going on,” says Kulchytska. (Feb. 25)

Katja Kolcio, associate professor of dance and director of the Allbritton Center for the Study of Public Life, questions if Vladimir Putin is a “strongman” in Mother Jones. “I don’t think ‘strongman’ is accurate when referencing Putin. His authoritarian and aggressive actions are a lashing out against his fears. And what he fears, more than NATO, is Ukrainian civic vitality and perseverance. Strength is exhibited in honesty, patience, perseverance. It is not surprising that political leaders in Ukraine dating back to the 1800s, through Soviet times and independence, and now, have been poets, artists, and those who insist on being themselves. This is strength.” (Feb. 27)

Kolcio also speaks to WTNH News 8 about the potential of Russia invading Ukraine. “So we’re very concerned both for our immediate friends and family, but also for the future of people living in Ukraine,” Kolcio said. “There is a deep commitment to keeping life going and not letting Putin stop the economy. Stop life from progressing.” (Feb. 15)

In Pangyrus, Kolcio shares an op-ed titled “The Sounding Board: Why Ukrainian Americans are Committed to Preserving Ukrainian Culture – and National Sovereignty.” (Feb. 27)

And in The Stamford Advocate, Kolcio says one way to help the people of Ukraine is to write to local representatives to emphasize there is more at stake than just NATO-Russian relations. “This has implications for the world involving the rise of autocratic dictatorships.” (Feb. 24)

Other media hits include:

Suzanne O’Connell, Harold T. Stearns Professor of Earth Science, explains in an updated Conversation article why geologist Marie Tharp’s maps in the late 1950s changed the way people imagine two-thirds of the world. “Well into the 1950s, many scientists assumed the seabed was featureless. Tharp showed that it contained rugged terrain, and that much of it was laid out in a systematic way. Her images were critical to the development of plate tectonic theory – the idea that plates, or large sections of Earth’s crust, interact to generate the planet’s seismic and volcanic activity.” (Feb. 28)

In The New York Times, Amy Bloom, Shapiro-Silverberg Professor of Creative Writing, shares the story of her marriage, her husband’s Alzheimer’s diagnosis, his decision to end his life, and her new memoir titled In Love. “It was very clear to me that I was not going to write this as a novel,” Bloom said. “I did not want to shape the narrative in a novel way. I wanted to tell the truth as best I could. Tell it straight.” (Feb. 27)

In Built-In, Jaime DeLanghe ’08 explains how she turned her liberal arts degree into a lucrative product management career. “As my career grew, I found a second love: search and machine learning. This, too, was deeply connected to my collegiate years. I have always been fascinated by how language works (and doesn’t work) to communicate, translate meaning and develop new ideas. Building a good search product is rooted in resolving all of the same linguistic and semiotic challenges — just at a much larger scale.” (Feb. 24)

In The Boston Globe, Clara Silverstein ’82 shares the story of how she and her friend Ellen met at summer camp and later attended Wesleyan together. “I had already started classes there, and she wanted to visit me during her college tour — she booked an admissions interview as an afterthought. On campus, I valued her perspective as someone who knew me at my core, not who I was trying to become. She saw right through my cool façade to a girl who just wanted to escape down a trail and read under a tree.” (Feb. 25)

Forbes announces that Leslie Warren, visiting instructor in American Sign Language, is on its list of “Women Over 50 Who are Leading the Way in Impact.” (Feb. 22)

Wesleyan’s Humanities for All Times Initiative is featured in The Middletown Press. The initiative is funded by the Andrew W. Mellon Foundation and will use an interdisciplinary lens to look at the history of race, industrialization, and politics in Connecticut. (Feb. 21)

Lindsay Dolan, assistant professor of government, shares an op-ed in The Washington Post, stating that partisan views—not the added costs of U.S. tariffs—shaped how firms responded to a trade war with China. “The trade war has negative impacts on U.S. businesses and contributed to the supply chain woes that have affected nearly all aspects of the U.S. economy. Despite rising concerns that tariffs are contributing to surging inflation, the Biden administration has yet to back down from Trump’s stance on trade. So why has the trade war endured?” (Feb. 16)

Houses owned by Wesleyan University on Vine Street in Middletown, numbers 7, 9, 11, and 21, are part of the Beman Triangle, one of the first free African-American neighborhoods formed two centuries ago. According to The Hour, the Beman Triangle may get a historic designation. (Feb. 11)

In The Hour, Lin Manuel Miranda ’02, Hon. ’15 is listed as one of six Connecticut connections to this year’s Oscar nominees. Before he worked on Broadway hits like “Hamilton,” “In the Heights” and films like “Encanto,” Miranda graduated from Wesleyan University in Middletown with a degree in theater. The University created the “Hamilton Prize for Creativity” to award to its most creative students in his honor. (Feb. 14)

Science Daily mentions that a team from Wesleyan University is participating in a study on a white dwarf star. A ring of planetary debris dotted with moon-sized structures has been observed orbiting near a white dwarf star, hinting at a nearby planet in the “habitable zone” where water and life could exist. (Feb. 11)

Peter Rutland, Colin and Nancy Campbell Professor in Global Issues and Democratic Thought, explains “why tearing up the INF treaty was a very bad idea” in Responsible Statecraft. (Feb. 15)

Jesse Nasta ’08, assistant professor of African American studies, speaks to The Hour about Middletown’s historic Beman Triangle. Nasta has been studying the area since he was a student at Wesleyan more than a decade ago. “That area remained Middletown’s African American center for decades,” Nasta said. (Feb. 27)

In Idaho Mountain Express, Todd Keats ’11, who played hockey at Wesleyan for four years, discusses the history of the St. Nicks, one of the oldest hockey teams in America. (Feb. 16)