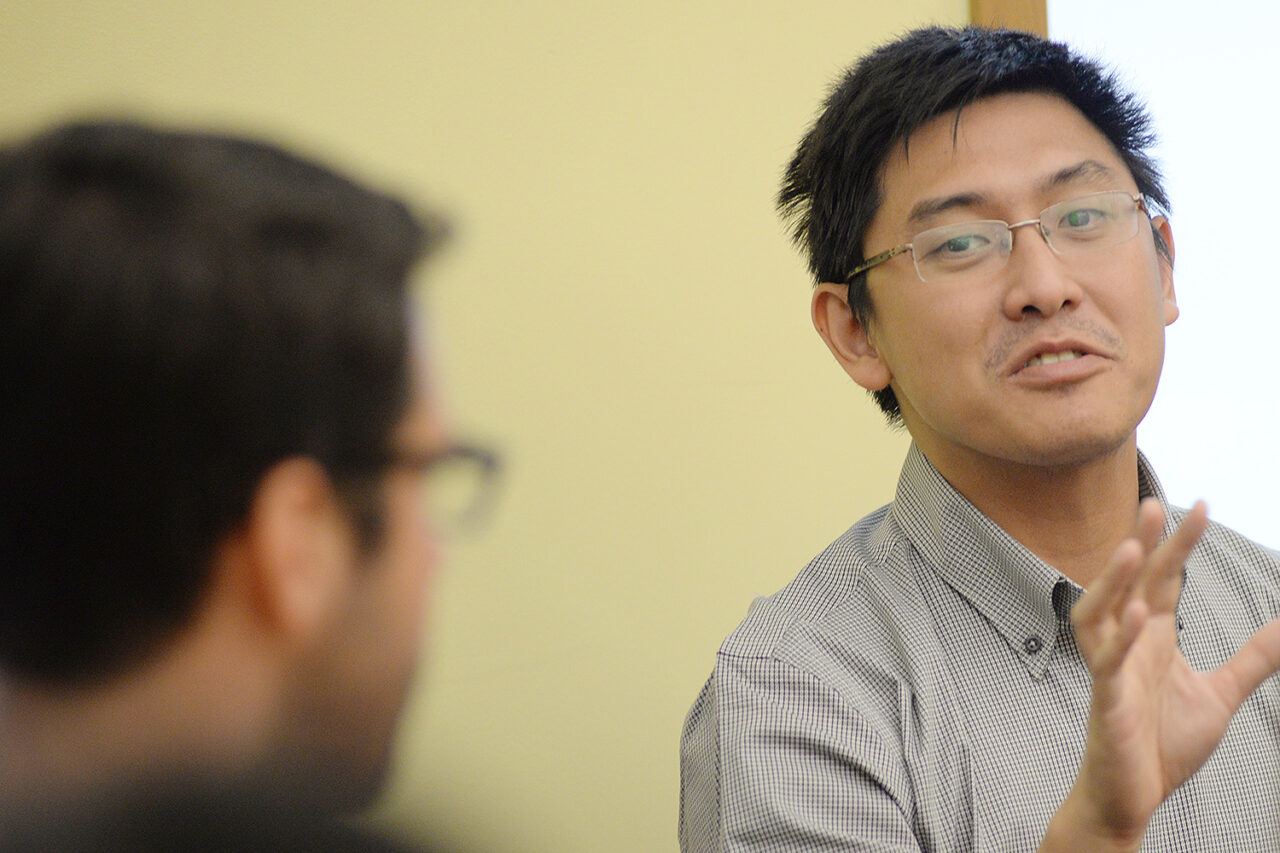 Eight faculty members were conferred tenure by the Board of Trustees at its most recent meeting. Their promotions will be effective July 1, 2022.

Claire Grace is a scholar of American and contemporary art with a focus on intersections between aesthetic practices and social and political intervention. Her first book, Art Demonstration: Group Material and the 1980s (MIT Press/October Books, forthcoming), examines a series of key works by the influential New York-based artist collective, Group Material. She offers courses on Art Since 1980; Art After 1945; Unsettling American Art, 1600–1900; Artists Design Exhibitions; Thresholds of Art and Activism; and Memory Image: Introduction to Art (as) History.

Han Li’s area of research is homogeneous dynamics and the application of principles of homogeneous dynamics to problems in number theory, arithmetic of quadratic forms, and geometry. He has received grants from the National Science Foundation and the Simons Foundation, and his work has been published in Advances in Mathematics, Compositio Mathematica, Proceedings of the American Mathematical Society, and Geometric and Functional Analysis. He offers courses on Calculus, Probability, Linear Algebra, Discrete Mathematics, and Analysis.

John Murillo is the author of two collections of poetry, Up Jump the Boogie (Cypher, 2010) and Kontemporary Amerikan Poetry (Four Way, 2020). He is the recipient of numerous awards, including the Four Quartets Prize, Larry Neal Writers Award, Pushcart Prize, and the Kingsley Tufts Poetry Award, and his poems have been published in American Poetry Review, Poetry, and Best American Poetry 2017, 2019, and 2020. He teaches introductory, intermediate, and advanced courses in the reading and writing of poetry, including Owning the Masters: Twentieth-Century Poetry for Twenty-First-Century Poets.

Paula Park’s scholarship focuses on 20th- and 21st-century Latin American literature and culture, as well as Philippine literature in Spanish, with a particular emphasis on exile writers, Asian diasporas, transpacific studies, and sound studies. Her work has been published in Hispanic Review, Symploke, and Transmodernity, and her first book, Intercolonial Intimacies: Relinking Latin/o America to the Philippines, 1898–1964, is forthcoming with the University of Pittsburgh Press. She offers courses on Spanish American modernismo, multilingual Latin American writers, and intercultural encounters between Latin America, Asia, and the Pacific.

Ying Jia Tan is a historian of science and technology whose research focuses on the history of energy in Modern China. His book, Recharging China in War and Revolution, 1882–1955 (Cornell University Press, 2021), examines electrification and the ways in which politics and warfare shaped the energy industry in China. He is a recipient of the Taiwan Fellowship (summer 2017) and the D. Kim Foundation Fellowship (2018–2019). Professor Tan offers courses on traditional and modern Chinese history, maritime East Asia, cartography, and the Anthropocene.

Jesse Torgerson is a scholar of medieval history whose research focuses on the Byzantine Roman empire, on exchange and interaction across the Mediterranean basin, and on the theory and practice of history and the digital humanities. His interdisciplinary revisionist study The Chronographia of George the Synkellos and Theophanes (Brill, forthcoming) explains how a retelling of the story of time itself justified a revolt in ninth-century Constantinople. He is co-founder of the Traveler’s Lab, and offers courses on Roman history, medieval travel, medieval empire, gender and historiography, and the COL’s interdisciplinary FYS: Great Books Unbound.

Danielle Vogel is a poet, lyric essayist, and interdisciplinary artist who has published three books of poetry, The Way a Line Hallucinates Its Own Linearity (Red Hen Press, 2020), Edges and Fray (Wesleyan University press, 2020), and Between Grammars (Noemi Press, 2015); two chapbooks and artist books; and numerous critical essays and reviews. Her work focuses on the intersections of queer ecology, somatics, and ceremony. She teaches introductory through advanced poetry workshops on documentary, innovative, and ecology poetics, creative nonfiction courses on the lyric essay and memory and memoir, and advanced workshops focused on composing across the arts.

Joseph Weiss is a sociocultural and political anthropologist whose research focuses on indigeneity and colonialism. His book, Shaping the Future on Haida Gwaii: Life Beyond Settler Colonialism (University of British Columbia Press, 2018), is an ethnographic study based on his years of fieldwork with the Haida community. It explores how the Indigenous Haida Nation in Western Canada addresses political and social change in a colonial society that insists that Indigenous people are disappearing. He teaches courses focusing on ecological anthropology, settler colonialism, anthropological methods, and temporality.

nextWesleyan Recognized as a Top Producer of Fulbright U.S. Students