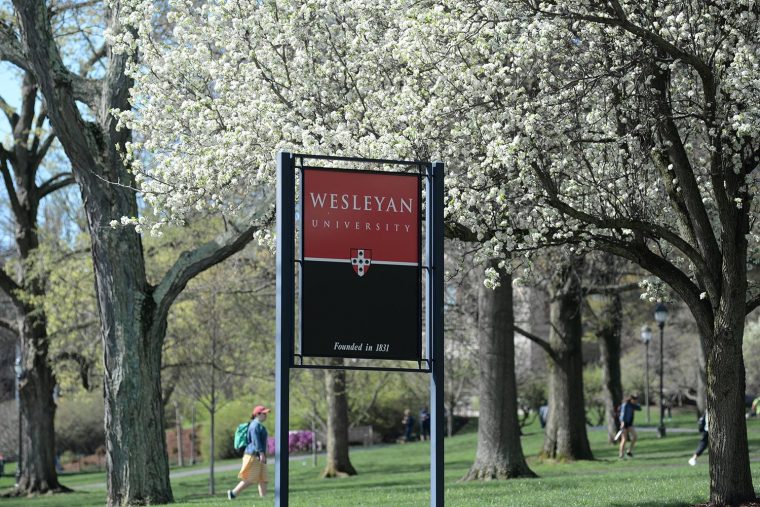 Harvard Professor Henry Louis Gates Jr. and Andy Curran, Wesleyan’s Willian Armstrong Professor of the Humanities, recently appeared at “Politics and Prose,” on Diane Rehm’s NPR show, On My Mind, and on Louis Lapham’s podcast “The World in Time.” The two professors discussed the history of race and their newly released book, Who’s Black and Why? A Hidden Chapter from the Eighteenth-Century Invention of Race, which was published by Harvard University Press in March 2022.

Erika Franklin-Fowler, professor of government and co-founder of the Wesleyan Media Project, speaks about money in politics to WTNH News 8. Television ads, she says, are where the candidates are going to spend the bulk of their money. “In a state like Connecticut, you would want to be advertising through other ways to reach voters,” she says in the interview. (April 11)

Katja Kolcio, associate professor of dance and director of the Allbritton Center, speaks to Boston’s NPR news station, WBUR, about her father’s collection of Ukrainian poems, books, pamphlets, and family histories that told of Ukrainian persecution and identity. His archive, called the Ukrainian Rochester Collection, was moved to the city of Dnipro in eastern Ukraine—half in 2018, the other half just before the Russian invasion. (April 22)

Ilana Harris-Babou, assistant professor of art, discusses her exhibitions, teaching, latest work, and art studio space at Wesleyan with the Observer. Her latest bodies of work created during the pandemic centered around wellness culture and larger issues of race, identity, nutrition, colonialism and diaspora, while also unpacking larger issues of whiteness within wellness culture. (April 20)

Roseann Liu, assistant professor of education studies, and Ben Levin ’23 are the co-authors of an op-ed titled “Social science and law must come together,” in The Connecticut Post. “Given that school finance and school segregation are two of the most enduring topics studied by social scientists of education, we were surprised to learn that the social sciences have played a less significant role in education equity lawsuits than we thought,” they wrote. (April 23)

According to The Wilton Bulletin, Americares has elected “renowned” community organizer, social entrepreneur, and founder and CEO of Shining Hope for Communities, Kennedy Odede ’12, to the Americares Board of Directors. Determined to make a difference in his community, Odede saved money from working at a factory to purchase a soccer ball, which he used to found Shining Hope, a grassroots movement that catalyzes large-scale transformation in urban slums by providing critical services for all, community advocacy platforms and education and leadership development for women and girls. (April 21)

According to the Journal of Blacks in Higher Education, Beverly Daniel Tatum ’75, Hon. ’15, P’04 will serve as interim president of Mount Holyoke College for the 2022-23 academic year. The college is a liberal arts educational institution for women in South Hadley, Mass. Six percent of the student body is black. (April 25)

Wesleyan University is presenting a new exhibition, curated by faculty and students, that features a collection of donated propaganda posters from China, according to The Darien Times. “The exhibition offers a different perspective on the cultural revolution and early days of reform and opening,” said Ying Jia Tan, assistant professor of History and East Asian Studies. “While the political persecutions carried out during the cultural revolution traumatized an entire generation of Chinese people and led to great suffering, many policies were put in place to improve the public health of China’s urban and rural regions.” (April 25)

According to the Institute for Family Studies, Wesleyan has a 50.66% married share— a measure of the school’s graduates who were born between 1980 and 1982 and were married as of 2014. “College, it turns out, is a great place to get married. There is a high correlation between spouses’ degree of educational attainment, a pattern of pairing usually called “educational homogamy.” (April 25)

“The Kardashians are a prime example of multiracial white supremacy,” says Ren Ellis Neyra, associate professor of African American studies, in The Los Angeles Times. “A commercial enterprise posing as a family, the Kardashians are hell-bent on extracting financial gain from Black people and Black culture, even as they stigmatize, in particular, Black women through their project of multiracial whiteness.” (April 19)

In The Hill, Gary Yohe, Huffington Foundation Professor of Economics and Environmental Studies, Emeritus, explains “How to read the latest science report from the IPCC.” “Unfortunately, the IPCC’s messaging allows the media to interpret the report in words that make it sound like the scientist authors are telling the world what to do,” Yohe writes. “Specifically, they are, as reported by the BBC, saying that there must be ‘rapid, deep and immediate cuts in carbon dioxide (CO2) emissions.” (April 7)

In The Washington Post, Peter Rutland, Colin and Nancy Campbell Professor in Global Issues and Democratic Thought discusses what could happen if pro-Putin performers come to America. “Cultural diplomacy goes back even before the Soviet period when the czar state was trying to cover up its atrocities at home by spending lavishly on high art and culture to show, ‘We are leaders of European civilization,” he says. (March 31)

And in The Conversation, Rutland discusses Russia’s economy, six weeks into the war with Ukraine. “After plunging to a record low of 136 to the U.S. dollar on March 10, 2022, the ruble has recovered to 83 to the dollar as of April 11, roughly what it was worth before the invasion,” he says. (April 12)

In The New York Times, Jennifer Finney Boylan ’80 shares an op-ed titled “I’m a Trans Woman. Bullies Don’t Surprise Me, but Allies Still Do.” As a queer American, “and one who has been involved in the movement for L.G.B.T.Q. equality for over two decades now, I am not surprised by the way trans folks are continuously bullied, misunderstood and belittled. What does surprise me, a little, is that in response, so many others — straight, cisgender and gay — have rallied on our behalf,” she says. (April 9)

Adam Leff ’90 and Zak Penn ’90, P’23 are mentioned in VICE for writing PCU, a low-budget, cult-classic film that took place “on a campus dominated by activist politics and political correctness.”  Much of PCU satirized their own experiences at Wesleyan. (April 5)

Andrew Curran, William Armstrong Professor of the Humanities, is mentioned in All Events In for his upcoming speaking engagement with anthropologist Nina G. Jablonski on May 4. Curran also was interviewed in Brazil’s O Globo newspaper about his recent biography, Diderot and the Art of Thinking Freely, which was recently published in a Brazilian edition. (April 7)

In Niemen Lab, Hannah Docter-Loeb ’22, who worked as the editor-in-chief of The Argus, questions why liberal art schools don’t offer payment for student journalists. “Low (or no) pay dictates who can be involved in student journalism. Not paying student journalists makes the newsroom inaccessible for low-income students of color, which in turn affects the newsroom’s demographics and coverage. It also shrinks editorial bandwidth and devalues the work they are doing,” she writes. (April 12)

In Smithsonian Magazine, Jacob Roberts ’11 writes about the querulous world of wild fig hunters in California. “While commercial fig harvests were decreasing in California, though, birds, wild pigs, and other animals kept spreading fig seeds. Like the tree sprouting from the center of that abandoned grain silo, these hardy plants have since rooted themselves in all kinds of bizarre spots: in drainage ditches, behind strip malls, on the edges of long-abandoned farms.” (March 2022)

Joyce Jacobsen, Andrews Professor of Economics Emerita, discusses the economy of South Dakota in The Center Square. South Dakota had only a 2.63% resignation rate in the labor force over the past year during the “great resignation,” according to a recent report from WalletHub. “Different states have different economies, and we are seeing a greater increase in quit rates in states where there are fewer remote work options and lower unemployment rates,” Jacobsen said in a statement. “The low unemployment rates mean that there are more options for workers to move to jobs that are more attractive to them.” (April 7)

The New York Times describes Artist-in-Residence Eiko Otake‘s figure in A Bodies in Fukushima as “exhausted or staggering, wrapped in an old kimono. [She] is found among waste bags of radiated debris or abandoned temples.” The article also mentions William Johnston, John E. Andrus Professor of History, and features a Q&A with Otake and dance artist Bill T. Jones. “What I was trying to do using my body was to compose something. I wanted to make a shape of a certain weight. Instead of only a few pictures, I wanted to make strings of pictures. So I made this two-hour film with 459 pictures. There is beauty even in destruction, and that might make people see an image longer,” Otake says. (April 6)

Emma Pasarow ’18 is featured in Meaww for staring as Auden in the new film, Along for the Ride.  “Before Along for the Ride, the talented actress starred in several projects, including the Showtime series “Super Pumped” (2022) with Joseph Gordon-Levitt and Tig Notaro’s “Am I Ok?” (2022). She has also performed in several theatrical performances while attending Wesleyan University.” (April 10)

The Middletown Press reports that the Middletown Pride festival, which is co-sponsored by Wesleyan, will take place on June 4. Following the Pride March, the second portion of the festival will focus on celebrating Middletown’s history and diversity. (April 17)

Maaza Mengiste, professor of English, and Jennifer Mittelstadt ’92 are 2022 Guggenheim Fellows, according to the John Simon Guggenheim Memorial Foundation. (April 11)

Miles Warren ’19 discusses his love for filmmaking and editing in CommsArts. “While I can appreciate a good 20th-century Black historical drama (that Hollywood absolutely eats up), I think there is finally room for a new group of young Black filmmakers to come in and create a whole new visual language for African American cinema.” (April 12)

Steven Greenhouse ’23 is a guest speaker on the podcast Stand Up! with Pete Dominick, where he discusses the labor movement. Greenhouse is a senior fellow at The Century Foundation, where he writes about wages and working conditions, labor organizing, and other workplace issues. (April 5)

In Reporter Wings, ESPN Insider reporter Field Yates ’09 discusses the start of fantasy football season. “Games don’t begin until early September, yet what an offseason it has already been. Seismic moves have been the theme, as superstars have been traded seemingly left and right. Franchise icons have been the focal point of franchise-altering moves,” he writes. “It’s been a lot.” (April 5)

In The Chronicle for Higher Education, Clara del Junco, Ph.D, STEM and data education librarian at Wesleyan, discusses the use of footnotes in scientific papers. “The pre-eminence of the ‘scientific’ over the ‘personal’ sends a clear message to underrepresented minorities (and overrepresented majorities) in the field: ableism, classism and white supremacy don’t matter if the science is right.” (April 5)

The Middletown Press reports that Wesleyan’s Embodying Antiracism Initiative includes two community fellows from Middletown: Kerry Kincy, an artist and community consultant and director of the Free Center’s art and wellness programming, and Sacha Armstrong-Crockett, a Realtor from Middletown and co-chairwoman of the mayor’s Anti-Racism Task Force. (April 7)