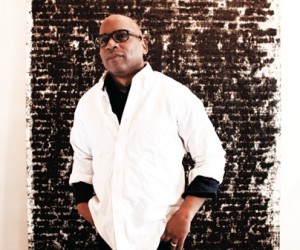 The exhibition, “Glenn Ligon: AMERICA,” features about 100 works, including paintings, prints, photography, drawings, and sculptural installations, as well as striking recent neon reliefs, one of them newly commissioned for the Whitney’s Madison Avenue windows. Over the course of his career, Ligon has created a body of work that has explored American history, literature, and society as it has built critically on the legacies of modern painting and more recent conceptual art.

The artist is renowned for his landmark series of text-based paintings, made since the late 1980s, which draw on the writings and speech of diverse figures including Jean Genet, Zora Neale Hurston, Jesse Jackson and Richard Pryor.

His subject matter covers a wide range—from the Million Man March and the aftermath of slavery to 1970s coloring books and the photography of Robert Mapplethorpe.

Ligon’s entered the national spotlight when President and Mrs. Obama chose his painting Black Like Me #2 for their private living space at the White House.

Carol Vogel recently wrote a feature about Glenn Ligon and his upcoming exhibition in The New York Times. Vogel writes: “His retrospective feels particularly timely because it comes at a moment when glaring polemics are no longer fashionable. Artists these days raise social and historical issues but usually keep them at a distance. Yet the underlying messages of works like Hands, a photograph from the Million Man March, speak to the urgency of change.”

The exhibition travels to the Los Angeles County Museum of Art in the fall of 2011 and to the Modern Art Museum of Fort Worth in early 2012.