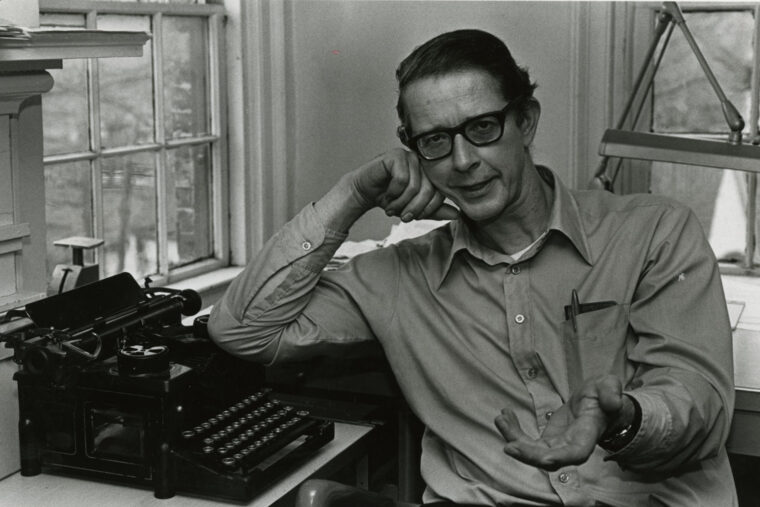 Richard Ohmann, Benjamin Waite Professor of the English Language, Emeritus, died Oct. 8 at the age of 90.

Ohmann received his BA from Oberlin College and his MA and PhD from Harvard University. He arrived at Wesleyan in 1961 and, until his retirement in 1996, served in many roles and helped to shape the future of Wesleyan.

Joel Pfister, Olin Professor of English, sketched Ohmann’s trajectory: “He was promoted rapidly to full professor; was appointed vice president and provost; protested on national TV against the Vietnam War; was elected vice president of the Modern Language Association (MLA) on an antiwar platform; founded with some other lefty luminaries the fabulous journal Radical Teacher; completely freaked out English departments everywhere with his powerful and hugely influential Marxist critique of the reigning constructions of the field in English in America (1976); and went on to write several more field-changing books (one with his friend Noam Chomsky), including Politics of Letters (1987) and Selling Culture (1996).”

Henry Abelove, Willbur Fisk Osborne Professor of English, Emeritus, commented: “No one did more than he to guide Wesleyan in absorbing the best of the lessons of the social movements of the 1960s.”

“Dick was a master at making the effortful look effortless,” remarked Professor of Anthropology Elizabeth Traube. “As director of the Center for the Humanities, he was always pursuing special projects such as assembling a planning group to incorporate cultural studies into the curriculum, hitting up Coca Cola to fund a faculty seminar on Making and Selling Culture, and then making sure that we produced a volume out of it. He had a wicked sense of humor and a steady moral compass.”

“It is very hard to briefly describe what Dick Ohmann meant to my generation of academics, and to the development of American universities more generally,” said Richard Slotkin, Olin Professor of English, Emeritus. “In the late 1970s he taught a class for American Studies called Towards a Socialist America—a radical innovation then, an inescapable subject now. He was a leader in the movement that transformed university life and culture, by making both faculties and student bodies, and college curricula, more inclusive by race, ethnicity, class, gender and sexuality. His books and articles analyzed the connections between postwar university development, corporate capitalism, and the Cold War. What was most remarkable and characteristic of his work was the way he integrated theory and practice, scholarly analysis with political action. His personal example gave courage and focus to generations of younger colleagues, and he will be sorely missed.” next“You Just Have to Read This…” Books by Wesleyan Authors Gottlieb '94, Scolnik ’78, Shanok ’98