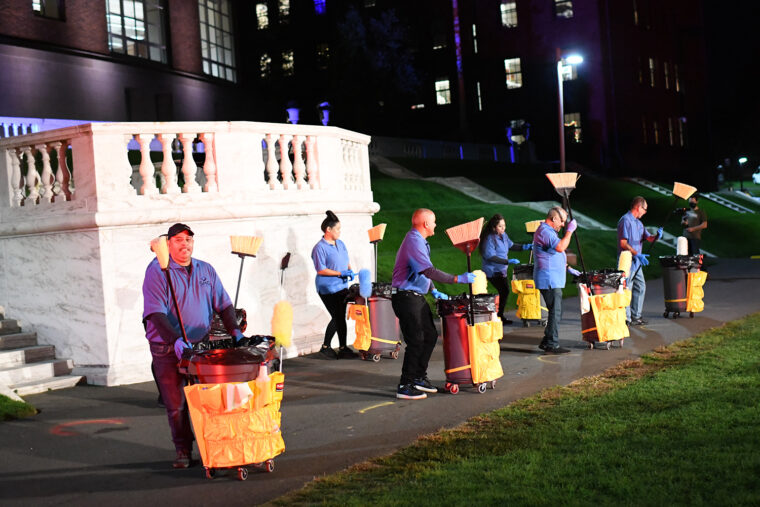 A man fixes a street light. Another washes windows. Two women take customer service calls. These are not events that are ordinarily the subject of artistic expression.

Take these everyday tasks, add a personal narrative, evocative lighting, and music that ranges in tone from the whimsical to the driving, and the work takes on an incandescent quality.

Work becomes a kind of magic.

Forklift Danceworks, in conjunction with the Center for the Arts, created “WesWorks,” a dance/theatrical presentation that highlights the important work of custodial staff, groundskeepers, power plant workers, and the other Physical Plant workers who make Wesleyan University run. The workers’ personal narrative was interwoven with a stylized presentation of their jobs in order to create a compelling piece of art. “You get a real understanding of (campus workers) daily lives,” said Samantha Angulo ’25.

The performances took place Oct. 14-15 starting at Andrus Field and moving throughout campus. Despite rain that washed out two performances over the weekend, close to 750 people saw the show.

“’WesWorks’ is the Center for the Arts’ first live performance (open to the general public) since March 2020 and we couldn’t imagine a better way to reopen our doors,” said Rani Arbo, CFA’s campus and community engagement manager, in her speech preceding the final dress rehearsal. “This performance has been seven years in the making. Since 2014, Forklift Danceworks’s Artistic Director Allison Orr has been working with Wesleyan students, faculty, and staff to bring us together in a community dance-making practice that uplifts the movements of labor and the people who make those movements.”

On a warm fall evening, the moon settled just above Olin Library, the lights dimmed and the overture, written by composer Graham Reynolds, began.

A lone man wearing a red Wesleyan shirt sat under a street light, making a repair. The recorded voice of material handler Kris Patterson rang out, describing his life and how he came to the University. He believes in the importance of his work and that of his colleagues. “I work for the kids on Foss Hill and on Fountain Street,” he said.

The streetlight flickered back on, the audience cheered, and the performance, a celebration of an important segment of the Wesleyan community, sprung to life.

The audience was then divided into four groups and each made their way across campus, stopping off in Parking Lot E, the loading dock at Boger Hall, Central Power Plant, and Zelnick Pavilion, ending back at Andrus Field. “Follow me into the darkness,” said a student guide, as she led her group around campus.

Each location featured a stylized scene of regular work life at Wesleyan set to music. A small squadron of white Physical Plant trucks emerged at Parking Lot E, a group of workers jumped out, made repairs, and then sped off. Workers at the loading dock bagged garbage and gleefully tossed boxes to one another. Other workers set up tables and chairs in front of the library, only to be told via walkie-talkie “They don’t like the setup,” prompting a laugh as they went back and started over again. Lawns were mowed and floors were swept.

The behind the scenes, yet essential work to make the University go, prompted cheers, applause, and murmurs of recognition throughout the evening.

“This is very cool. It just warms you to the soul,” said Roseann Sillasen, a project manager for Physical Plant-Facilities. “We see everybody every day. You see them as their jobs. Through this, you see their other side. They are creative. They have a lot of love for what they do. This really helps showcase what they do. It gives a new perspective.”

Take the piece “Solo for a Window Washer,” for example.

When custodian Lloyd Jones walked behind the glass in the Zelnick Pavilion, bathed in blue light, and began to wash the windows, a hush fell over the audience as if they were watching a sacred act. A saxophonist emerged from the night and serenaded Jones’ work.

Jones’ mother worked as a cleaner, we learn in a voiceover, and she taught him how to clean. “It became more like an art to me,” Jones said.

He took to it and when he had a choice to work either at Wesleyan or Yale, he chose Wesleyan, getting a knowing chuckle from the crowd. The scene finished when the windows were clean. It was a performance of work at its most essential—and beautiful. “The best part is you stand back and you admire it. I did all these windows,” he said.

Daisy Garcia and Jake Rybczyk, both members of the class of 2024, said the show helped them see Wesleyan in a different light.

“I like how we really can see what is going on behind the scenes at our school,” Garcia said.

“I like that these people are getting recognition,” Rybczyk said.

Several common themes emerged from the melding of movement with narrative—pride for their work, a seriousness of purpose, and a sense of being an integral part of the Wesleyan experience.

“We’re all working together to get these kids out into the world,” a worker said in voiceover as the collective stood together outside of the library at the end of “WesWorks,” bathed in shining theatrical light.

Photos of “WesWorks” final rehearsal and first performance are in this Wesleyan Flickr album and are below:  (Photos by Olivia Drake MALS ’08) nextJacobsen Honored for Furthering the Status of Women in Economics