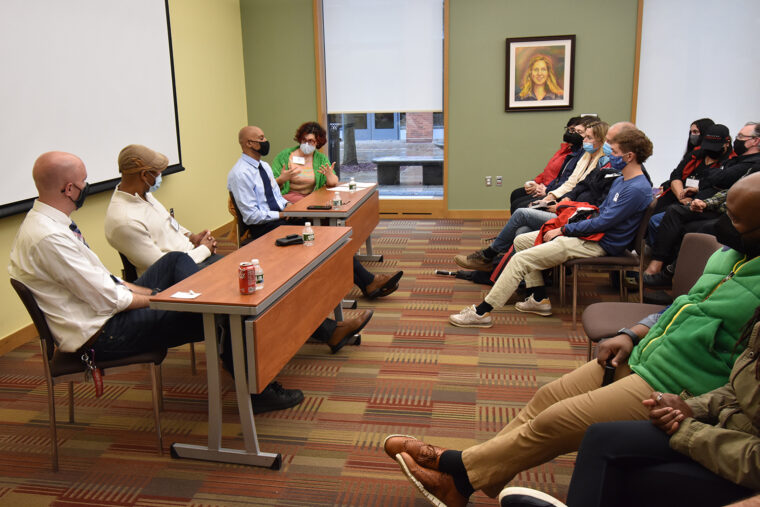 For Josh Hinman BLS ’21, an inmate at Cheshire Correctional Institution, Wesleyan’s Center for Prison Education (CPE) program “felt like a gamble.” When he joined the program in there was no degree pathway and he remembers asking the pilot program directors Russel Perkins ’09 and Molly Birnbaum ’09, if it was a study. Now years later, Hinman is a college graduate and a member of the inaugural class of Wesleyan BLS degree recipients.

Hinman and his classmates Michael Braham BLS ’21 and Clyde Meikle BLS ’21 shared their experiences with the Wesleyan Center for Prison Education program at a WESSeminar during Homecoming Weekend.

For Clyde Meikle, the program wasn’t only about learning: “it was about our lives,” he said. He read Kant, George Jackson, and Lavoisier and began to comprehend the various instruments of violence that he had experienced: law, institutions, culture. In class, he and a Wesleyan tutor compared their experiences with violence in high school. When Meikle was growing up, “if you were punched you had to punch back,” he said. Meikle and his friends found that with no institutions there to protect them, they had to use their “bodies as a means to protect themselves.” For his tutor, retaliation was condemned.

While Meikle was incarcerated, he began to deepen his conception of freedom. He developed programs to transform the young people he met in prison. He currently works at the Vera Institute of Justice, helping incarcerated youth learn ways to productively and constructively navigate the spaces they inhabit.

Braham is currently working as a paralegal and is a fellow at Yale’s access to law program, on the path to becoming a lawyer. In 1999, the guards and bureaucratic processes at Cheshire Correctional Institution violated his Eighth Amendment rights. He fought against the Attorney General’s office, and after years of struggle, won a case that seemed both legislatively and bureaucratically impenetrable.

He saw a future for himself in the periphery of social justice work, and through CPE he gained tools for that work. His Capstone project was a study of Cultural critiques of frat and hip-hop rap music that come out of a normative analysis of whiteness. Looking back on that essay, he says he realized that he might have misread some of his referenced texts, but that realization came too close to his release so he didn’t have time to rewrite the project.

In describing his Capstone project, he said, “I went in and I used my knowledge of hip hop and particular lyrics and I made my argument. Did I make a compelling argument? Did I make an impressive argument? I mean it was a logical argument… but it was an argument nonetheless.”

This is the quintessential dilemma and prize of a liberal arts student.

Hinman is further out of the program than Braham and Meikle. He was able to get his associate’s degree before he was released and moved on to a manufacturing machinist program. “More than a few CPE fellows have gotten scoliosis from carrying in so many [of his] textbooks” for class,” Hinman joked.

Hinman’s transition out of prison was not an easy one. He described the firewalls between the department of corrections and probationary spaces and communities. His CPE classrooms allowed him to develop as a lifelong learner in an intrapersonal and intercommunicative space.

Hinman believes that Wesleyan not only gave him the tools for education and reintroduction into his community, but fulfilled needs that he could only describe as “human.” “I was able to make the most profoundly negative experience positive,” Hinman said.