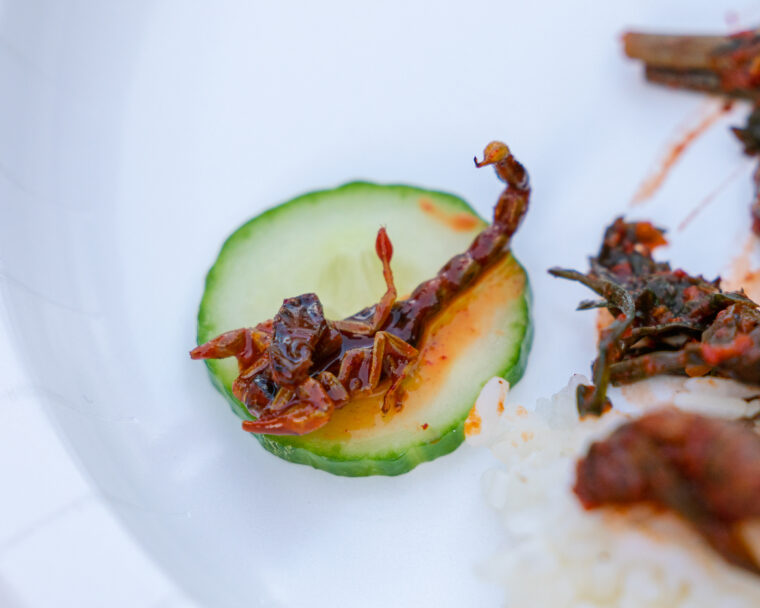 A group of students came together for a unique picnic on the Alpha Delta Phi Lawn on Saturday Nov. 20. On the menu: bugs of all types.

Bugsgiving brought students together for tasty bug dishes prepared by Brooklyn Bugs Chef Joseph Yoon and a host of activities and presentations surrounding the benefits of entomophagy – the scientific term for eating insects.

The event was led by Megan Levan ‘22 and sponsored by the Green Fund, the College of the Environment, and the Office of Sustainability. Levan, environmental studies and South Asia studies in a global context (university major), has done extensive writing and research in the field of entomophagy, particularly on the ‘ick’ factor surrounding eating insects in Western culture.  “We grow up being told that bugs are gross, but in reality they are delicious and the benefits that entomophagy has on environmental sustainability are immense,” Levan said.

Her interest in the field and thesis research led her to Joseph Yoon, an edible insect ambassador who started Brooklyn Bugs, an organization working to raise appreciation for insect consumption through creative programming that demonstrates that bugs can be an easy snack or beautifully plated by a chef.

Aside from being quite delicious, insect consumption offers a host of environmental benefits. Insects take far less resources like large amounts of arable land, feed, and water to farm in comparison to conventional sources of protein like beef and chicken. Marcus Choo, a writer for Earth.org, said in a recent article that farming insects takes about 100 times less greenhouse gases per kilogram of organism gain. Insects are also rich in proteins and other minerals that offer a similar nutritional value to the types of food that are typically found on the table at Thanksgiving.

Levan hopes that Bugsgiving will encourage a sense of appreciation and open mindedness when it comes to eating insects as a sustainable and delicious alternative to conventional sources of protein.

Although entomophagy is widely practiced in many countries, eating bugs isn’t yet readily available and affordable for all in the United States. The goal is for events like this one to counter the ‘ick’ factor woven into society, creating  a consumer demand for insect products.

On the menu at Bugsgiving was a multicourse meal including dishes like Mealworm Chocolate Brownies to Cicada Nymph kimchi. Trying to describe the flavor of specific insects is like trying to describe the flavor of chicken or pork, but the mealworm in the brownies added a crunchy texture and the nymphs in the kimchi perfectly soaked up the flavors and paired nicely with the rice and tofu.

“The food prepared by Chef Yoon was incredible, especially the dessert,” said Bugsgiving guest Zoe Holbo ‘24. “I’ve been into entomophagy for a while, but I’ve been listening to others say that they had no idea bugs could taste like this!”

Additional photos of Bugsgiving are below: (Photos by Nick Sng ’23)