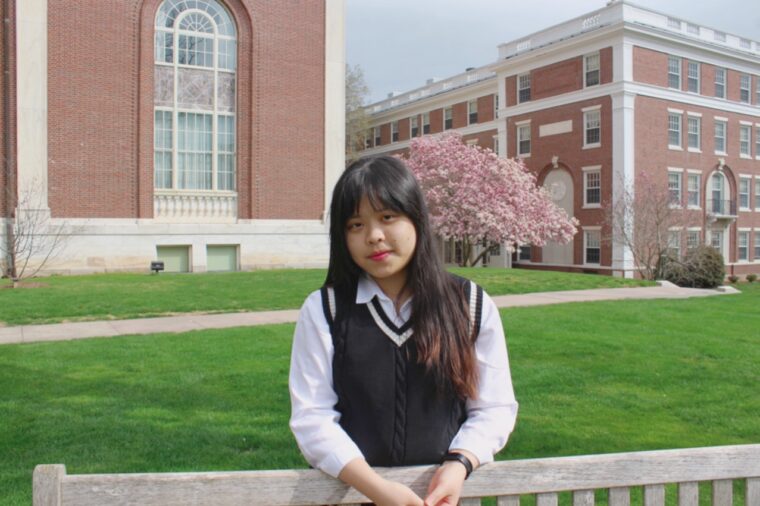 Anna Nguyen ’22 believes that if you want to have a local impact, your thinking and decision making can’t be divorced from considerations of the wider world.

Time spent in the United States, England, and China – as well as her home country of Vietnam – taught her to be a true global citizen. “That is why I chose not to stay in my own country, as much as I love it. I need to be able to see it from a zoomed-out perspective before I know what the problems are. By being in so many countries, I see issues from very different perspectives,” she said.

“At every turn in her life and academic career, Anna has sought to maximize complexity – to look at things through as many different lenses and from as many different angles as possible.  She leaves no received idea unchallenged,” said Alice Hadler, formerly Senior Associate Director, the Fries Center for Global Studies.

Now, thanks to her hard work at Wesleyan, Nguyen, a Freeman Scholar majoring in Economics and the College of Social Studies, will have yet another opportunity to wider her perspective. “Something I’ve learned at Wesleyan is that being open-minded isn’t just opening your mind to different ideas, but also being open to people entering your mind and seeing your ideas,” she said.

Nguyen was named a Schwarzman Scholar, and will head to Beijing’s Tsinghua University for a one-year master’s in global affairs. The university is ranked first in Asia as an indispensable base for China’s political, business, and technological leadership. Starting in August 2022, she will live in Beijing for a year of study and cultural immersion.

“My goal for the program is to orient myself a bit closer to home in terms of the social, political, and cultural landscape of the region. I’ve been away from it the past several years,” she said.

Nguyen beat tremendous odds to be invited into the program. Over 3,000 students from across the world applied. Only 400 applicants were interviewed to cull into a class of 150 representing 33 countries and 106 universities.

“The Schwarzman Scholarship is an amazing opportunity to spend a year on the campus of one of China’s premier universities, living and learning with an incredible group of students from around the world. China is a complicated and internally diverse place that is sure to be at the center of so many global issues in the years to come. And the education Anna will receive is not just about China: it’s a leadership-focused course of study that applies no matter where she ends up,” said Stephen Angle, Director of the Center for Global Studies.

The scholarship is only the most recent of Nguyen’s successes. She was awarded the 2021 Wesleyan Memorial Prize, given to an outstanding member of the junior class. “Anna is an extraordinary student. I had the pleasure of working with her both as an instructor in the Modern China and Maritime East Asia course. Her papers challenge triumphant accounts of modernization and globalization. She used Chinese language sources in her research papers for both classes and presented a multi-faceted account of iconic historical figures in Chinese history,” said Ying Jia Tan, Assistant Professor of History.

She won the Cardinal Crest Leadership Award, given to the member of the student government who selflessly served the student body. She was elected President of the Wesleyan Student Assembly. She works with Residence Life and in the Olin Library. “Anna has an exceptional community service record. As the president of Wesleyan Student Assembly during the COVID-19 pandemic, she ensured that the administration understood the challenges that students faced during such extraordinary times,” Tan said.

“Her leadership skills are perhaps even more exceptional: Last year during the worst of COVID, in her WSA role, Anna was essentially the student-facing voice of the administration, even as she maintained the trust of her fellow students – two groups that in my experience often do not feel properly “heard” by one another – a tribute to Anna’s diplomatic skills. The combination of enthusiasm and urgency in her community-wide emails, and emphasis on the need for the community to come together in the shared mission of making this work, was quite remarkable,” Hadler said.

In short, Nguyen is someone who gets involved.

Ever since she was a young child, Nguyen was interested in what was beyond her home in the northern mountains of Vietnam. Her education was mostly ideological, and she suspected that there was more beyond the Communist rhetoric to which she had been introduced.

Nguyen’s parents believed in education, even though they had not attended college themselves. They embraced Anna’s vision for her life, supported her in her intellectual pursuits, praying for her courage and strength. “My parents just trusted with every decision I’ve made,” she said.

Her long-term goal is to become a professor, hoping to intersect real world experiences, like the one she’s going to have as a Schwarzman Scholar, with her research interests.

“At times I have felt a sense of loneliness in my reckless courage and ‘naïve’ idealistic belief in what this world is fully capable of. After all, I am only one individual; yet my experiences at Wesleyan and the promising mission of the Schwartzman Scholars program makes me feel empowered, as taught by John Wesley, to ‘do all the good we can, by all the means we can, in all the ways we can, in all the places we can, at all the times we can, to all the people we can, as long as we ever can,’” she wrote.

Students interested in pursuing a Schwarzman Scholarship or other fellowship should visit https://www.wesleyan.edu/cgs/fellowships/index.html.