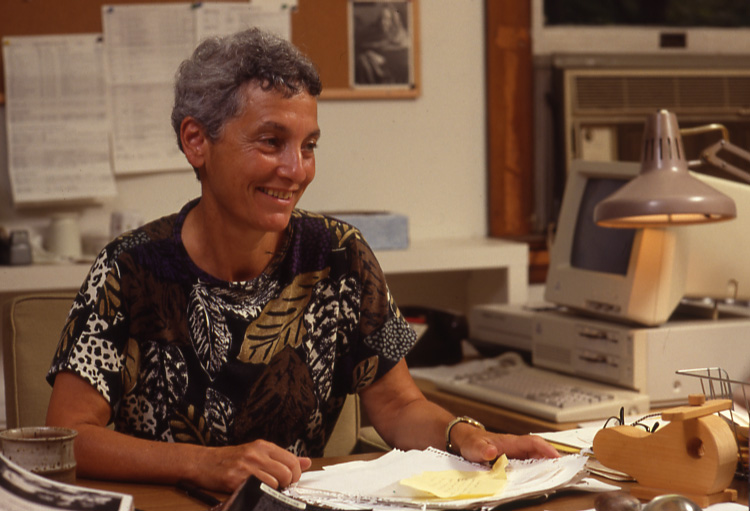 Gertrude Hughes, professor of English, emerita, died on Jan. 5 at the age of 85.

Hughes received her BA from Mount Holyoke College, her MAT from Wesleyan University, and her Ph.D from Yale University. She returned to Wesleyan as an assistant professor of English in 1976 and remained until her retirement in 2006.

“Gertrude was a remarkable woman, a valued colleague, and a treasured friend,” recalled Bill Stowe, Benjamin Waite Professor of the English Language, Emeritus. “She began her academic career later than most, completing her Yale PhD under the formidable Harold Bloom while raising four children. Her book on Ralph Waldo Emerson was followed by another on Rudolf Steiner; an essay on Steiner and feminist thought; and essays on American poets, including Emily Dickinson, Gwendolyn Brooks, H.D., and Adrienne Rich. She was a founder and early chair of Women’s Studies (now Feminist, Gender, and Sexuality Studies). She was for many years a joyful presence in the lives of students and colleagues.”

Gay Smith, Professor of Theater, Emerita, said: “Born in Amsterdam in the thirties, Gertrude felt a physical resemblance and kinship with Anne Frank, though Gertrude’s parents were able to get her and her two sisters out of the Netherlands before 1940 when the Nazis took over and forced Frank’s family into hiding. Educated in the Waldorf schools in Manhattan, Gertrude became deeply committed to anthroposophy and the teachings of Rudolf Steiner, which addressed her own need to reconcile scientific thinking with spiritual beliefs.”

“One of the most remarkable aspects of visiting Gertrude over the years,” recalled Professor of English Stephanie Weiner, “was to see that though her memory was fading, her spirit seemed to shine through with all the greater force. It was as though I was coming to see her essence: filled with wonder, curiosity, kindness, and cheer. Almost always, her bed was covered from end to end with books and articles. In our final meeting, when her ability to express herself in words was almost entirely gone, I showed her a photograph of one of her old Wesleyan colleagues. She smiled, raised her hand with effort, and pointed at the picture. ‘Yes!’ she exclaimed joyfully. She would not want us to think of her as truly gone.”

Hughes is survived by two sisters, two sons and daughters-in-law, a daughter and son-in-law, a niece, three nephews, and 14 grandchildren. The family is planning a memorial gathering at a later date, likely on or around her birthday in April (pandemic permitting). Donations in Gertrude’s memory may be made to the Alzheimer’s Association (www.alz.org) or the Anthroposophical Society of America (www.anthroposophy.org).