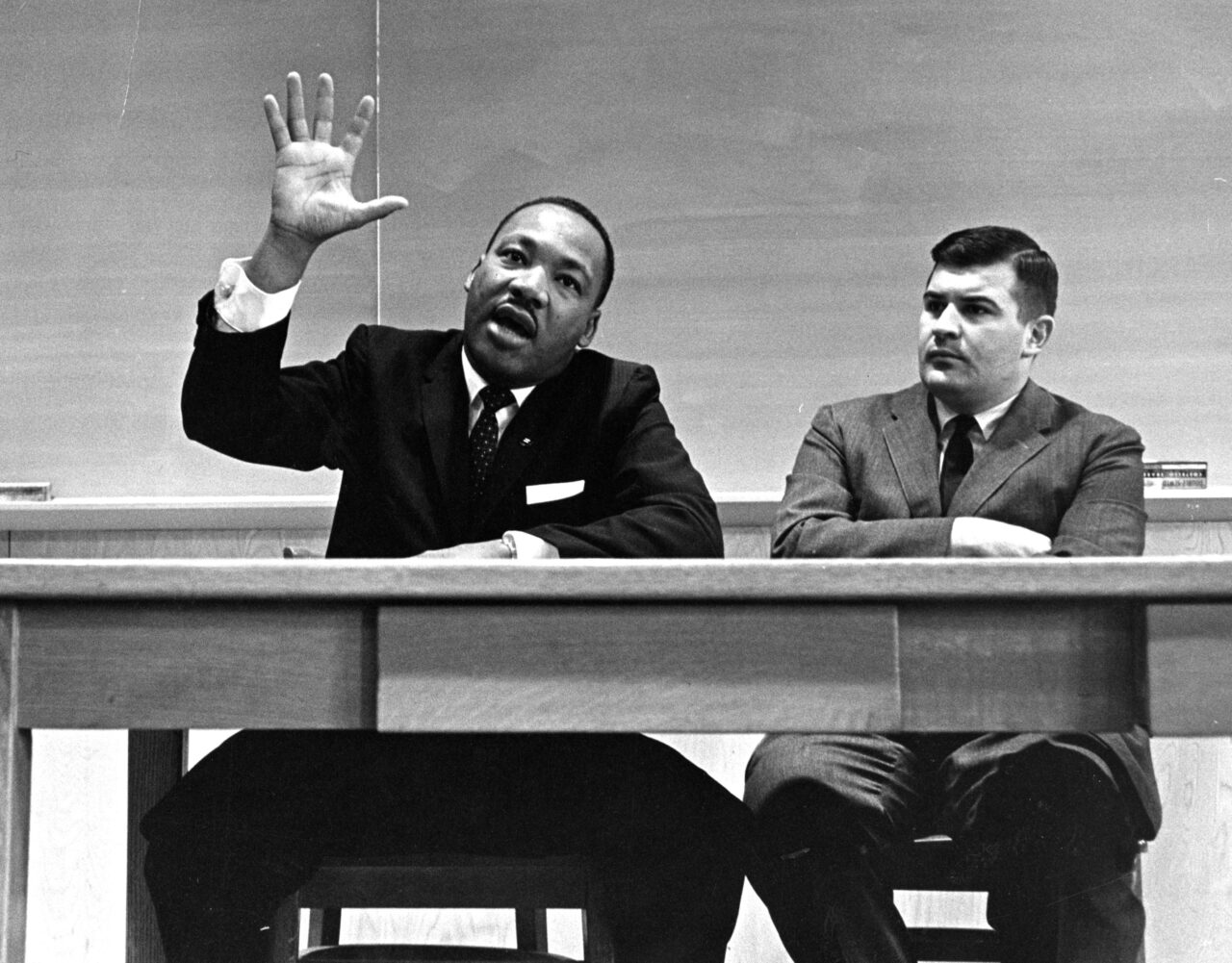 Looking back over Martin Luther King Jr.’s four visits to Wesleyan between 1962 and 1966, one is struck by how many of his concerns still exist today.

He saw hatred on the march throughout the country, and believed that the only way to combat it was through non-violent means. “Moral ends will be achieved by moral means,” King told the Wesleyan crowd during his first visit to Wes, 60 years ago.

King, who received an honorary degree from Wesleyan in 1964, spoke about the injustice of racial segregation. He urged people to move away from materialism towards a higher plain of being. He railed against poverty and income inequality. “If a nation can spend $800 a second to fight a war in Vietnam, more than $20 billion to place a man on the moon, it can afford to spend billions to put God’s own children on their own two feet right here on Earth,” King said during his 1964 Baccalaureate Sermon.

While his calls to the Wesleyan community showed the gravity of the struggle, King was always hopeful. “We can move through the darkness of the hour to the brightness of a new day. I have faith in this, and I believe in this because I believe that somehow the arc of the moral universe is long, but it bends towards justice,” King said in 1964.

King’s deep commitment to civil rights and non-violence, rooted in his own faith and moral compass, emerges from contemporary accounts of his campus visits. Thousands of students and Middletown community members heard King preach and teach.

The casual interactions between King and faculty members and students give a sense of the man. He joked with faculty members’ children. He was afraid of the Wesleyan guest house caretaker’s Great Dane. He answered students’ questions directly, with the force of his personal moral gravity behind his words. But he was approachable – both King and a student working an event where he was scheduled to speak arrived early and chatted for a half hour about their families.

The students, for their parts, embraced King, clamoring to have the opportunity to drive him to the airport, hanging on his every word. A Wesleyan professor said that students kept King up with questions so late, the preacher’s eyes got noticeably heavy.

King’s relationship to Wesleyan began with his friendship with religion professor John Maguire. The two had met during a weekend conference at a seminary in 1959. They reconnected years later when Maguire, who grew up in Montgomery, Alabama, participated in the 1961 Freedom Rides. Maguire called King “Doc” and was by his side during each of his visits.

When Wesleyan held a service in Memorial Chapel after King’s assassination in 1968, Maguire was called upon to do the eulogy. “If we could dare to believe what he believed – if we could break loose and learn to love, then maybe, just maybe, we might know life,” said Maguire, according to The Hartford Courant.

Documentation of King’s visits to campus can be found in the Olin Library archives. Additional photos of his visits to Wesleyan are below. (Photos courtesy of Special Collections and Archives)