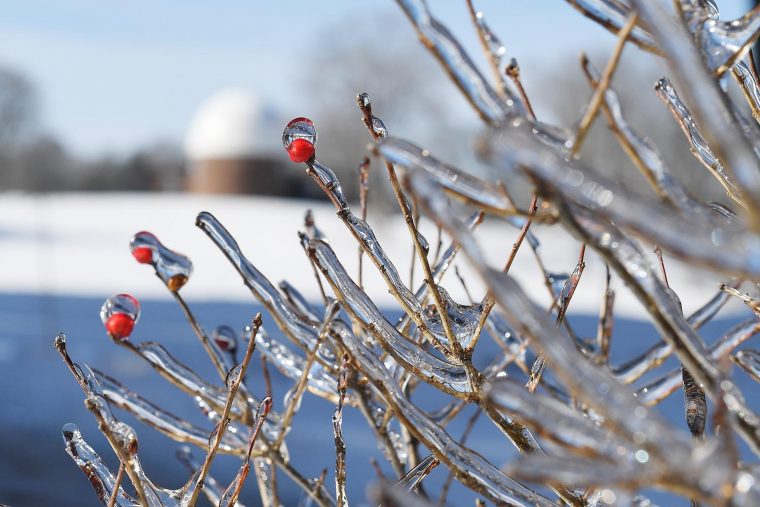 On MSN and Yahoo! News, Marc Eisner, Henry Merritt Wriston Chair in Public Policy and professor of government, speaks on how states across the country are ramping up efforts to reduce their greenhouse gas emissions. “Much depends on funding that [Gov. Ned] Lamont can’t control (for example, resources needed to replace diesel buses with electric vehicles, the building of charging stations),” Eisner said of the Connecticut governor’s recent actions. “Some of this may come from the [Build Back Better] bill, if it makes it through the Senate in its current form.” (Jan. 20)

Jaylen Berry ’18 discusses his passion to support people of color and become a catalyst for mobility in his community in a Metro Hartford “Homegrown CT” article. He talks about his work with Wesleyan’s Patricelli Center and founding the Jaylen D. Berry Scholarship fund with the goal of creating social, political, and financial change by supporting young men and women from Connecticut who plan to use their education to create positive change in the world. “The Patricelli Center [Fellowship] was the most pivotal class I took at Wesleyan because of the trajectory it put me on and the way it opened my mind.” (Jan. 24)

Wesleyan President Michael Roth ’78 appears in the Chronicle of Higher Education for participating in a panel on “What’s the State of Free Expression on Campus.” (Jan. 27)

Joyce Jacobsen, professor emerita of economics, speaks to the The Center Square about unemployment rebounding in Alaska. “Continued vigilance about public health to rebuild public confidence and guard against significant future waves of infection and hospitalization will be key in keeping the recovery on track,” she said. (Jan. 31)

In Yahoo! News via The Hartford Courant, Katja Kolcio, associate professor of dance and director of the Allbritton Center, said her contacts in Ukraine fear a so-called hybrid war — involving cyber attacks on the power grid and the internet along with military incursions. “That can really destabilize social systems. They feel that’s a danger as real as a military invasion,” she said. “I was just on the phone this morning with a good number of people who were trying to figure out how to survive and live their lives with this impending invasion. They say, ‘We have to continue to live.'” (Jan. 30)

In Bloomberg, Peter Rutland, Colin and Nancy Campbell Professor in Global Issues and Democratic Thought, discusses how international oil companies, like BP Plc, potentially has the most to lose if the situation in Ukraine triggers a crisis between Russia and the West. “The energy bottom line is in Putin’s favor,” he said.  “Does the Biden administration really want to start increasing the pain for European energy consumers by hitting oil and gas companies that are doing huge amounts of business in Russia?” (Jan. 31)

In The Hartford Courant, Harrison Martin ’22 shares an op-ed on the importance of Connecticut implementing a statewide program for Correctional Medications for Opioid Use Disorder (MOUD). “There are currently three FDA-approved forms of MOUD: methadone, buprenorphine (Suboxone), and naltrexone (Vivitrol). People who receive behavioral interventions alone are more likely to relapse than those on long-term MOUD treatment. Additional benefits of MOUD for those formerly incarcerated include reduced criminal activity and recidivism.” (Jan. 22)

The Journal Gazette reports that Jeff Galloway ’67, who represented the U.S. at the 1972 Olympic Games in Munich, is the keynote speaker for the Fort Wayne Running Club’s annual banquet. (Jan. 25)

ABC News via CNN shares a few “fast facts” about John Hickenlooper ’74, MA’80, Hon. ’10, former governor of Colorado and former 2020 Democratic presidential candidate. According to the report, Hickenlooper worked as an exploration geologist for Buckhorn Petroleum. in 1981-1986, and in 1988, he opened Colorado’s first brewpub, Wynkoop Brewing Company. (Jan. 20)

Wooden sculptures created by artist Don Green ’81 are featured in Journal Now. “Green’s appreciation for natural form is evident in the wood grain, which he consistently highlights. At the same time, he performs extensive manipulations to shape and polish his wood components according to his own aesthetic intentions. Green tends to favor smoothly rounded forms that resemble eggs or stones polished by wind or water. There are hints of anthropomorphism, as in an untitled sculpture roughly the height of an average adult.” (Jan. 22)

Psychotherapist Hilary Jacobs Hendel ’85 explains why mourning for the self is a necessary part of healing in the National Alliance of Mental Health’s blog. “The consequences of unresolved traumas are huge. For many of us, years of our lives may have been compromised by false beliefs that we were not good enough or worthy of being loved. Beliefs that others could not possibly accept us for our true selves, flaws and all, can lead to loneliness and a feeling of disconnection.” (Jan. 21)

According to Forbes, Wesleyan’s “Carceral Connecticut Project” will develop new curricula. archival research, and public exhibitions, films and conferences that explore slavery, race, and industrialization in New England. The project is supported by a $16 million Mellon Foundation grant. (Jan. 28)

“Rapper Cardi B won big in court this week,” writes Robyn Autry, chair of the Sociology Department, in News Net Daily. Cardi B was awarded more than $4 million, including $1.3 million to cover legal fees, in her landmark defamation lawsuit against YouTuber Tasha K (Latasha Kebe) and her company Kebe Studios LLC for making false claims about her sexual health, her drug use, her marriage and the well-being of her child. “But Cardi B walks away with more than a financial win: The case is a cautionary tale for those who want to mix unfounded gossip with social media news.” (Jan. 26)

Plans regarding Wesleyan’s new Neighborhood Preschool are featured in The Greenwich Times. “Our new NPS is a significant upgrade on our current facilities, and will accommodate 52 youngsters in multiple classrooms and outdoor play yards,” Nicole Stanton, provost and senior vice president of academic affairs; and Ruth Johnson, new science building facilities liaison and associate professor of biology; said in a statement to the Wesleyan community. (Jan. 26)

WTNH Channel 8 interviews September Johnson, alcohol and other drug specialist, about Wesleyan’s new smoking and vaping ban on campus. “We know it’s going to take time, and it’s an environmental change that we’re all working towards, and we’re excited to see it,” said Johnson. “We know that it’s going to benefit the health of our community now and for years to come.” (Jan. 26)

Pollstar runs a Q&A with music agent Shirin Nury ’12, who worked with several young pop acts during the COVID-19 pandemic. During an upcoming panel, she will “touch on the strategies we implemented” and “shed light on how we transitioned that momentum into meaningful, live experiences. (Jan. 28)

On Nasdaq, Pie for Providers CEO Chelsea Sprayregen ’10 discusses the importance of improving pay and working conditions for child care providers. “We envision a world in which caregiving work is valued and caregivers are paid accordingly.” (Jan. 20)