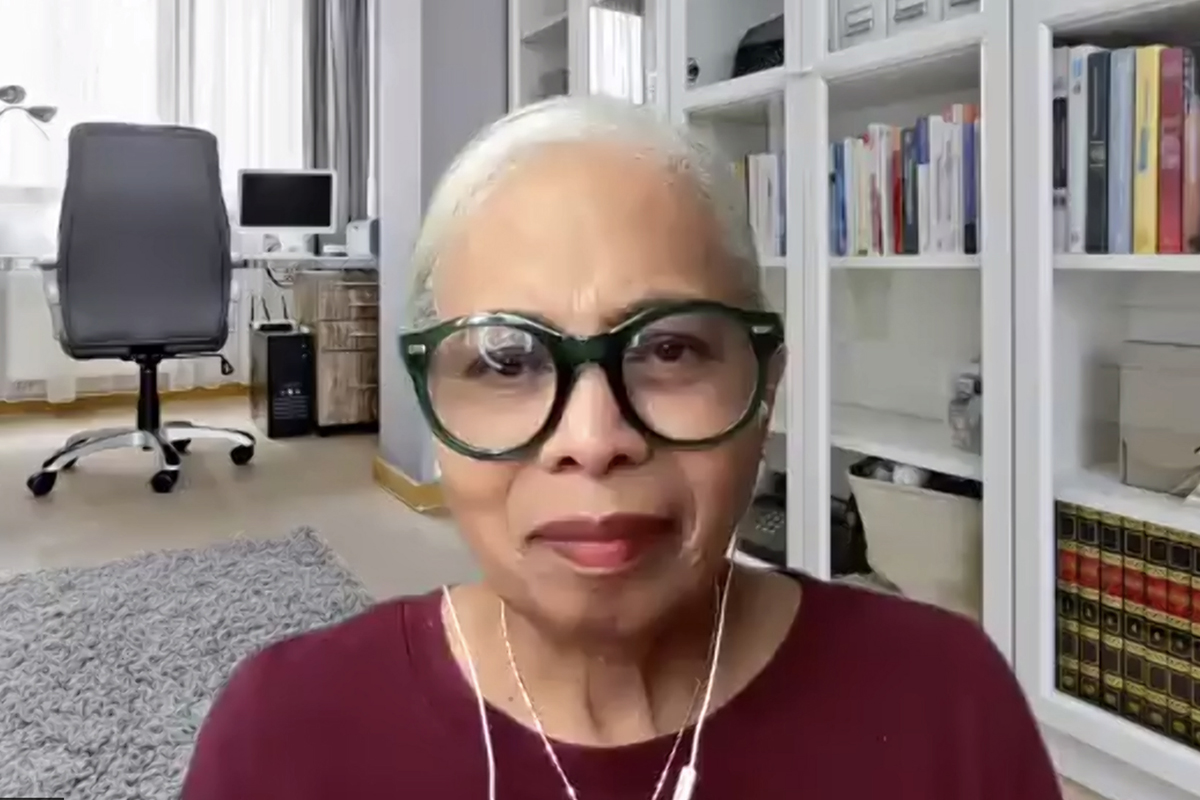 Following WWII, droves of veterans returned home, determined to begin living “the American dream.” With help of the G.I. Bill, veterans were able to purchase new homes for only $8,000 in newly-developed, sprawling subdivisions known as “Levittowns.”

But when Army veteran James Ladson returned from the war in 1943, he wasn’t permitted to move his family to the bustling community situated on the northeast side of Philadelphia. Although he was financially qualified, there was one problem: he was Black.

According to Clause 25 in Levittown’s covenant, “The tenant agrees not to permit the premises to be used or occupied by any person other than members of the Caucasian race.” So instead, he purchased a home in West Philadelphia for the same price.

James Ladson’s daughter, Gloria Ladson-Billings, doesn’t regret growing up in West Philadelphia, but she isn’t shy to point out the massive disparity in the homes’ values. Today, her childhood home is valued at $93,000. Levittown homes, however, are valued at more than $500,000 and the neighborhood remains more than 85 percent white.

“Think about the accumulation of wealth for [the Levittown] families, and also the loss of wealth that occurred over that time,” Ladson-Billings said during Wesleyan’s second annual Equity and Inclusion Summit, held Jan. 31 to Feb. 3. “And this wasn’t because of an individual, this was because of a system that permitted white G.I.s to purchase a house, that my father financially qualified for, but could not receive. This meant that children of the people who were able to live in Levittown homes were able to accumulate wealth. Children who lived in my [neighborhood] could not.”

Explaining this type of racial disparity, Ladson-Billings said, is a prime example of what Critical Race Theory— or CRT—seeks to do. CRT, an academic concept created by legal scholars in the late 1970s, has become a popular buzzword in recent years as conservative lawmakers seek to ban anti-racism education in public schools. “Now we’re talking about it like it’s a new phenomenon,” she said in a recent video focusing on CRT.

Simply put, the purpose of CRT is to help understand the cause of racial disparities. It can be applied to discussions of race, racism, diversity, inclusion, whiteness, slavery, and school segregation, for example.

“CRT is a legal theory used to analyze racial inequality. It is used to explain systemic ways racial discrimination operates in employment, housing, health, wealth accumulation, education, and other social benefits. However, today opponents are determined to censor ANY conversation about race,” she explained. “Thus, issues of diversity, equity, inclusion, school desegregation, or affirmative action are being called CRT even though they are not. Going down this road means we can have NO civil debate about race and racism in our public forums.”

Ladson-Billings, a national expert on Critical Race Theory, is the Kellner Family Distinguished Professor Emerita of Urban Education at the University of Wisconsin—Madison. She’s been studying CRT, and publishing papers and books on the topic since the early 90s.

During her talk, Ladson-Billings pointed out that from 1619 to the mid 20th century, racial disparity was considered genetic. “What we accepted was, biogenetic exclamations. In other words, black people are not as smart. Black people’s brains— we literally had scientists measuring people’s skulls and their brains. They had an entire field called eugenics, suggesting that the ‘best’ people are white and what the ‘worst’ people are. But eugenics began to fall out of favor. People we’re starting to say, ‘That doesn’t make any sense. That’s not true.'”

This change of mindset was likely a direct correlation with Brown vs. the Board of Education in 1954; the Civil Rights Act of 1964, affirmative action in 1965, and the Voter Rights Act in 1965. Inequality existed, Ladson-Billings explained, because of unequal opportunity.

ENCOURAGING AN INCLUSIVE LEARNING ENVIRONMENT IN THE CLASSROOM

Something as simple as explaining how office hours work at the beginning of the semester can boost a student’s confidence and reduce anxiety.

“Are office hours by appointment or can they just show up? If they can just show up, does that mean that they’re going to be there with all the other students who also showed up or do they get individual times with you? What if they get there and the doors are closed? Do they knock or do they wait outside on a bench,” asked April Ruiz, dean for academic equity, inclusion, and success the Equity and Inclusion Summit’s second session on Feb. 2 that focused on inclusive teaching practices.

“Sometimes that uncertainty of what it might look like when you get there can be enough to make a student who’s already feeling hesitant to not go,” she said. “So explain as much as you can. That is going to reduce a little bit of the anxiety.”

Wesleyan faculty, she advised, can play a huge role in promoting an inclusive learning environment. Before jumping right into teaching, she suggests faculty make the time for full introductions, share stories, and ask students what they hope to get out of their class.

Ruiz stressed that not all students understand Wesleyan’s “hidden curriculum,” or how Wesleyan—or college in general— works. Students who come from elite high schools or boarding schools are taught in advance “how to move about” the academic environment, and the value of building personal relationships with their professors.

“But for other students, it’s very different, and if you don’t teach everyone ‘the hidden curriculum’ you’re further advancing the students who are already coming from a place of great privilege and you’re leaving behind those who need that transition, that guidance, the most,” she said.

Traditionally, Wesleyan’s Student Assembly (WSA) “has been known as a primarily white, male, and wealthy group of students,” said Elena Brennan ’24, chair of equity and inclusion for the WSA. “Knowing that this population is not wholly representative of the student body, we’ve been making some efforts to make the WSA a more accessible organization for all students.”

During the Summit’s final event on Feb. 3, several student and staff representatives—like Brennan—shared ways their own groups, offices, and programs are working to create a more inclusive and antiracist community at Wesleyan and beyond.

Brennan explained how the student governing body is working to diversify its ranks by providing stipends to student representatives from underrepresented backgrounds; making purposeful outreach during election seasons; hosting listening tours with the WSA leadership board; meeting with the International Student Advisory Board; and overseeing the Cardinals First program, which matches first-generation, low-income students with rising junior and senior mentors

Amin Gonzalez ’96, vice president and dean of admission and financial aid, and Bob Coughlin, director of financial aid, shared an update about the Financial Aid Strategy Working Group which meets several times a year. Recently, the group announced it would be providing health insurance to students in the Class of 2024 who didn’t have comparable insurance already; provide international students who arrive with few resources access to supplies such as toiletries and winter jackets; eliminating the admissions application fee to all financial-aid seeking applicants; and offering all members of the Class of 2026 personal computers to help remove another barrier to success.

“Our charge has really been to remove financial aid barriers that will ultimately improve all students’ academic experience and ensure their educational success,” Gonzalez said.

Ariana Molokwu, EAI associate producer, provided a summary of Wesleyan’s new Embodying Anti-Racism Initiative (EAI), a interdisciplinary leadership training initiative supported by The Andrew W. Mellon Foundation. EAI looks to the arts as a catalyst for transformative change on campus and in the local community.

“It’s not enough to just be not racist,” Molokwu said. “In order for us to have a safe and inclusive space … we need to go a step further. We need to be actively anti-racist. So this program wants us to investigate how can we uphold the values of anti-racism at Wesleyan? What do we mean in order to grow in support of these values? How can we better equip our faculty, staff, and students with the skills and knowledge of anti-racist work? What curriculum do we currently offer on-campus where our holes what’s missing? And then finally, what is our relationship to the Middletown community? How can this relationship be healed, repaired, and nurtured as a campus that shares its geography so directly?”

In conjunction with the Equity and Inclusion Summit, Olin Library is hosting an exhibit in the library’s east hallway that showcases books written by Gloria Ladson-Billings; Martin Luther King Jr. Day keynote speaker Andratesha Fritzgerald, and a collection of recent book banning in the news. A New York Times article from Jan. 30 warns “Book Ban Efforts Spread Across the U.S.” The American Library Association, however, strongly condemns any acts of censorship. Books that have been recently challenged include Toni Morrison’s The Bluest Eye and Beloved; Isabel Wilkerson’s Caste: The Origins of Our Discontents; Ibram X. Kendi’s Stamped from the Beginning and How to be an Antiracist; Jerry Craft’s Class Act; Angie Thomas’s The Hate U Give; George M. Johnson’s All Boys aren’t Blue; to name a few.

These books are available at Olin Library, Wesleyan Library’s online collection, and at Middletown’s Russell Library.

The Office for Equity and Inclusion intends to make the summit an annual event. The inaugural summit took place remotely over one day, Feb. 8, 2021, and covered topics about social justice, equity, antiracism, decision making from an anti-oppressive lens, and ways administrators, faculty, staff, and students can become more engaged.

“We’re not done yet. You know, not only are we not done yet, but we’re not even done imagining what we can do,” said Demetrius Colvin, director of the Resource Center, during the summit. “What can we do? What do we want to do? What is motivating us? I think that requires supporting and developing how you think about diversity, inclusion … how you feel about it, as well as what you act to do about it. It’s the thinking, feeling, and acting all together.”