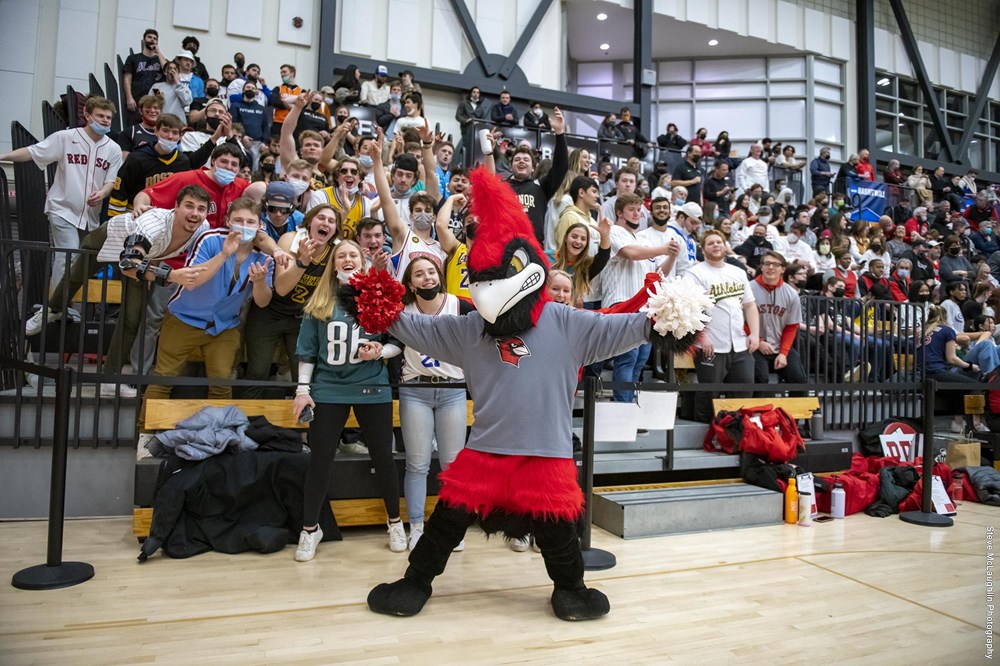 One good bounce and the Wesleyan men’s basketball team would still be playing in the NCAA Division III Tournament.

After an exciting start to the weekend where Wesleyan trounced Husson 81-61 in a first-round matchup Friday night, the Cardinals fell just short against Rensselaer Polytechnic Institute, 59-58 in Saturday’s second-round game. After a hard-fought last few minutes where the lead kept changing hands, Preston Maccoux’s [’23] fallaway jumper hit the front rim and bounced away as time expired.

“There isn’t much to say in those circumstances except to give (the players) a hug, tell them you care about them and thank them for such a great season,” said men’s basketball coach Joe Reilly. “Once the sting of defeat fades, and it will, we can look back and appreciate all of our accomplishments.”

The Cardinals finished their record-breaking season 25-4, the winningest season in the program’s more than century-long history. Sam Peek ’22, the NESCAC Player of the Year, led the team in scoring with 17.9 ppg. Jordan James ’22 had a field goal percentage of 73 percent, good for 2nd in the nation and program record, in addition to being the club’s leading rebounder with 188 (6.7 per game.) The team ranked 11th nationally in field goal percentage (49.3 percent).

While Peek and James might have led the squad in some key stats, coach Joe Reilly said leadership could be found up and down the roster. “They are a great group. They were super connected. They were as close a unit as I’ve ever had in my 14 years here,” said Reilly, who was honored as the NESCAC Coach of the Year. “Wesleyan is a place that attracts top-quality student athletes – everyone leads.”

Reilly first saw the seeds for this team planted back in 2019-20. The team went 14-10, losing a series of close games on buzzer-beaters. They found out they weren’t going to make the NESCAC Tournament while holed up in a hotel in Brunswick, ME. The next day, playing for nothing but pride, they went out and beat aspiring tournament participant Bowdoin College, knocking them out of contention for the tournament. “I told the coaches, that’s the sign of a high character team,” Reilly said.

It would be a couple of years before that character could be placed on full display. As was the case for all of Wesleyan’s student-athletes, COVID-19 took away their opportunity to play. For many of the players, playing basketball isn’t just about the game itself – it’s the hub of their social lives, it’s a place to relieve stress and enhance their mental health, Reilly said. Imagine telling a pianist that they couldn’t play for a year – that’s what it was like for these athletes, he said.

When the team got back together in Fall 2021 after a year of Zoom meetings, the joy was palpable. “When the ball started bouncing again in Silloway Gym, it was just magical,” Reilly said.

It wasn’t just joy going around, Reilly explained. There was a real sense of possibility – these guys could play. “We felt like we could beat anyone in the country on any given night,” Reilly said.

On the one hand, with 11 upperclassmen on the roster, this was one of the most experienced teams Reilly coached. On the other, the underclassmen had never been to a college practice thanks to the pandemic, let alone play in a game. But as the juniors and seniors refined already developed skills, the first-years and sophomores were making themselves known in practice. This was a deep roster, something that would be become a necessity over the course of the season, with 10 of the 20 players on the roster quarantined for the virus at one point or another. “The sign of a good program is that you have very good young players,” said Reilly, who was hopeful for the future.

Reilly said the team rode the wave of support given by the Wesleyan community. Over the past three weeks, Silloway Gymnasium was filled every night, creating an electric atmosphere. “It was a good a college athletic experience as I’ve ever seen,” Reilly said.