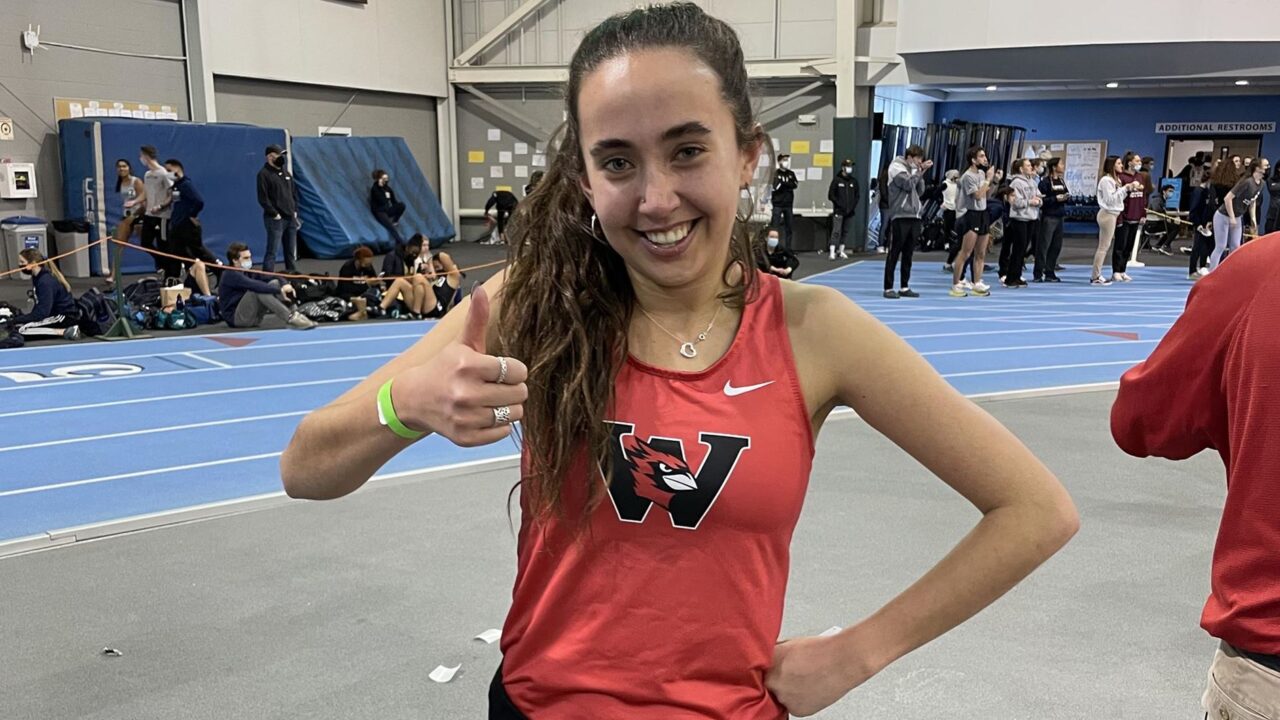 Maeve Hoffman ’23 looked for a single positive outcome from every race of 2021-22 women’s indoor track season. It could be something big – like a win, of which there were many – or a technical improvement that brought her closer to her ideal performance. No matter what, she sought to find one good thing.

“Running is, for me, a lot about positive momentum. If you find that one good thing and channel it, you know the next (meet) will be better. If you don’t, the weeks are going to fly by and it’s not going to go your way,” said Hoffman, a neuroscience and psychology major interested in either medicine or research.

Hoffman gathered enough good things during the season to be named a NCAA Division III All-American.

Hoffman ’23 and Grace Devanny ’23 earned the All-American honors competing at the 2022 NCAA Division III Indoor Championships in March. (Devanny had already been named a Division III Women’s Soccer All-American for her stellar performance in the Cardinals’ run to the national semifinal.)

Back in high school, Hoffman had no great designs on track and field glory. Her sophomore year, her family moved from Maryland to Seattle and she decided to join the cross-country team as a way of making friends. A break out performance her junior year of high school changed her trajectory and led her to Wesleyan, where she found great admiration for the women on the team and the campus environment. “I found the 800-meter race and just got really competitive about it,” Hoffman said. “That really got me into wanting to race in college.”

Hoffman said that after a long pandemic related layoff, she went into the season doubting her ability to compete. “I was really nervous,” she said.

As the season progressed and Hoffman faced more competition, she had the realization that most great athletes have at some point thought – I can beat these people, simply put and then went about doing so. “There was one race in the middle of the season that put me over the edge. I looked around and thought, I can beat any of these girls if I go to Nationals,” Hoffman said.

Hoffman is following her family legacy at Wesleyan. Her grandfather, Harry Fehan ’43, GP ‘23, ran cross country in the early 1940s. “I never knew him, but he just loved his time here,” she said.

As she runs along routes on campus that her grandfather ran, Hoffman has high hopes for the future. She hopes to improve upon her school indoor record time in the 800m – she has her sights set on the overall school record set by Becky Lopez-Anido ’21 last season. She’s thinking about getting a master’s degree. She hopes to continue running after graduation. “I’ve thought about these goals for so long that that you start to believe them. That is why I set them so high,” she said.

nextMatteson '23 Takes on the Future In New Book