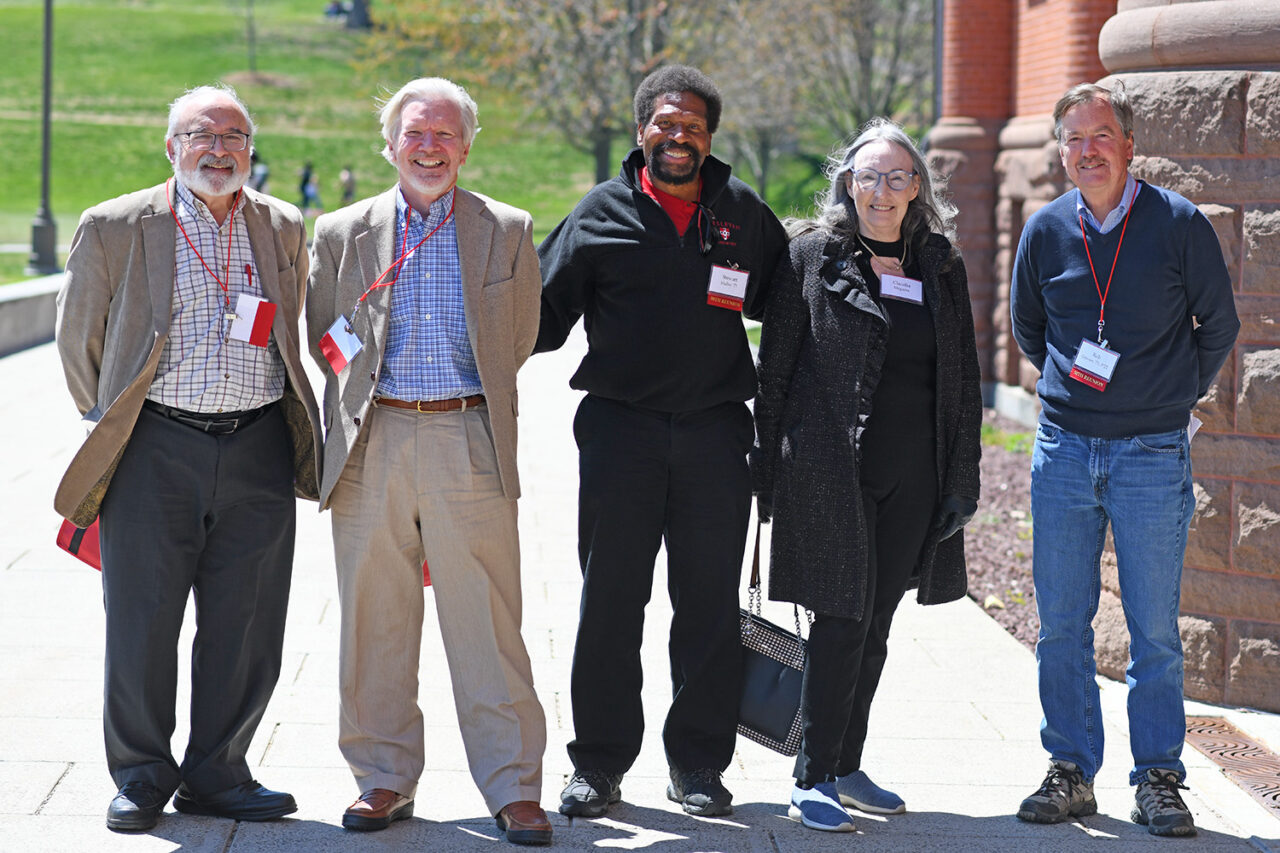 The Vietnam War, the murders of Martin Luther King Jr. and Robert Kennedy, the civil rights movement, the Student Strike of 1970 – to hear the graduates of the Classes of 1970 and 1971 talk, it was as if this all happened yesterday. Most of them can still remember their draft number.

“These were combustible years of high drama in every setting,” Steve Ingraham ’70 said to a collection of his classmates at Memorial Chapel at an assembly last Friday morning.

The 50th reunion took place April 28 through May 1. For alumni, it was a makeup for a reunion cancelled by the global pandemic. Through a weekend of discussions, lectures, games, and gatherings, the group relived old memories – and the tumult that governed their four years on campus.

Wesleyan’s environment in that time was particularly charged. The graduates described the seriousness of the 1970 Student Strike in protest of the Vietnam War and how the integration of the Wesleyan campus was delicate and often fraught. “We have a long long way to go, but Wesleyan was the opportunity to understand a lot of those complex issues,” said David R. Jones ’70, Hon ’81, MA ‘83, moderator of a panel about race at Wesleyan. “We had to learn how to be with one another,” said Marvin Williams ‘71.

Religion professor Stephen D. Crites captured the tone in an essay for the 1970 Summer edition of Wesleyan magazine: “We couldn’t go on doing the usual things at all. We were not beguiled by a breeze, but caught in a storm, menacing, exhilarating, impossible to ignore. If you wanted to escape it you had to run to shelter.”

For many of the graduates, the crucible of the late 1960s helped them realize a different way of life. Wesleyan opened up their world, providing access to ideas and people that they never would have had back at home. Then as now, the university was an environment that provided a sense of purpose and direction. “I was trying to find my place and figure out what I was supposed to be doing,” said Prince Chambliss ’70.

What comes through in every anecdote is how much talk flowed around campus. There were never ending conversations about life and what they were learning and the state of the world and what they hoped to become (or not become) … the words seemed endless and an integral part of the experience of life on campus. “I was not as smart as the smart guys, but I found out I can hold my own in the conversation,” said John Griffin ’70, P’ 06

President Michael S. Roth ’78 alluded to this continuous exploration of ideas as an integral part of the university’s identity to this day. “It’s important for students not to conform to the status quo, not to be complacent – to know how to make positive change in the world around them and not just be a critic,” Roth told the assembled classes at a talk on Saturday.

The tone of the weekend wasn’t all serious. The alumni spoke of college hijinx. They remembered meeting friends who they would keep their whole lives. Henry Glanternik ’70, P ’99, ’05, recalled his first day on campus and playing touch football and watching a tall, athletic young man leap to grab a pass. That man, Alan Dachs ’70, Hon ’07, P ’98, GP ‘26, sat in the crowd and smiled at Glanternik’s memory.

Campus eccentrics were fondly recalled, as were professors who offered wisdom and the occasional much-needed tongue lashing. They spoke with joy of an environment where questions were more important than answers, where ideas took precedent over grades, and where you could learn how to create your own path. “I got in and it changed my life,” said Gary Hill ’70.

Many people spoke of the transformative nature of their semesters abroad (Paris seemed to be a particular highlight.) “My home has been in the same place my entire life. Wesleyan really opened up my horizons,” said Marshall Webb ’70.

The music scene on campus at the time was iconic. The Grateful Dead played a legendary performance at the base of Foss Hill the night before the Student Strike. Janis Joplin played a show and later that night went to a party at a fraternity house.

These memories were at the tips of everyone’s fingertips, even five decades later. “Whatever I did, I carried Wesleyan with me,” one alum told his fellow classmates.

Additional photos of the reunion celebrations are below. The full photo gallery is available in this Wesleyan Flickr album.

previousVoting For Alumni-Elected Trustees Way to Engage in Campus Life