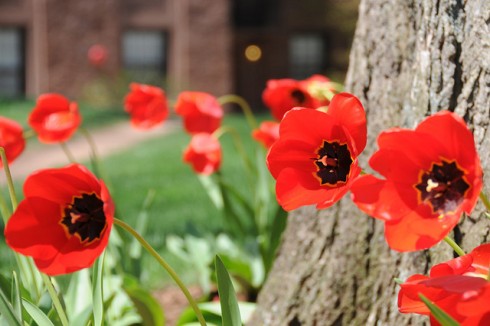 In Outside, Stephen Talbot ’70 discusses how he got into acting. Talbot made his acting debut as Gilbert on the hit classic TV sitcom “Leave It to Beaver” in 1959. “[His parents] said, ‘OK, we’ll get you a good agent and you can act, but you’ll always have to stay in a regular school.’ So I started going out on interviews and got roles right away.” (May 14)

According to W42St.com, a 19,000-pound landmark artwork, created by Malcolm Cochran ’71 is now on display at Pier 96 in New York City. Titled “Private Passage,” the artwork was hauled, rolled, pushed, and cajoled back onto its foundations.

Dick Millerick ’51 and Joseph Millerick ’28, P’51 are mentioned in an article about watchmaking in Arkansas Online. “When Dick Millerick was a child, his father, Joseph, worked as a personnel manager for a clock company in Forest Hill, Conn. But Joseph Millerick had put himself through Wesleyan University … before that by playing the piano to accompany the tracks of silent movies in theaters in that area.” (May 15)

In The Chestertown Spy, Jamie Kirkpatrick ’70 writes about his college experience at Wesleyan. “Our college years weren’t easy. That’s an understatement. We might not have known it at the time, but we were a generation on the cusp of significant cultural change. The war in Viet Nam was always lurking in the background. (In my senior year, I vividly remember watching the first draft lottery on television, a life-defining moment for many of my friends and classmates.) At the same time, race relations were being radically redefined.” (May 10)

Dartmouth Associate Professor of Government Nicholas Miller ’09 speaks to Valley News about Russia’s military weapons. “Russia basically calculates: ‘We can invade Ukraine and we know the U.S. and NATO aren’t going to directly get involved because they’re afraid of nuclear war.’ And so that gives them kind of a shield that they can use to engage in aggression,” he said. (May 9)

According to the Webby Awards, The MLK Tapes, a podcast written and hosted by William Klabber ’67, is the recipient of a 2022 Webby Award in the Best Limited Series category. For the past two years, Klabber has been working with TenderfootTV and iHeart Media on the podcast, which takes a deep dive into the murder of Dr. Martin Luther King Jr. (May 1)

In The Hill, Gary Yohe, Huffington Foundation professor of economics and environmental studies, emeritus, suggests that government agencies work to maintain conditions favorable for international climate research efforts while protecting U.S. interests. “Action by individual researchers is important as well,” Yohe and his colleagues say. “Those of us who have been involved in the climate issue should also try to preserve our own personal relations and lines of international scientific communication.” (May 7)

Tracy Heather Strain, associate director of the College of Film and the Moving Image, speaks about Wesleyan’s future of filmmaking in Documentary Magazine. “She anticipates holding a biennial documentary conference at the Jeanine Basinger Center for Film Studies. She hopes to connect alumni more formally with current students to provide internship and career opportunities. Alumni have already supported funds to help first-generation students and students of color on their senior thesis films and to help facilitate access to professional opportunities.” (May 2)

Roger Chriss ’87 is remembered in Pain News Network for being a true helper and advocate for those living with Ehlers-Danlos syndrome (EDS) and other rare diseases. (May 8)

The John Hopkins Hub reports that neuroscientist Alex Kolodkin ’80 was elected to the National Academy of Sciences. Kolodkin is the Charles J. Homcy and Simeon G. Margolis Professor in the Department of Neuroscience at the School of Medicine at Johns Hopkins and his research focuses on how neuronal connectivity is established during embryonic and postnatal development. (May 6)

According to the Island Park Herald, Michael Pernick ’10 is running for a seat in the New York State Senate this November. Pernick was selected by Democrats to run for the seat in the 9th District, which covers much of the southwestern corner of Nassau County. “After spending my career traveling the country making sure people had their voices heard, I realized that what I really wanted to do was use my voice for my community,” Pernick said. “I’ve been an advocate my whole life.” (May 5)

The Brattleboro Reformer mentions that artwork by David Stearns ’57 will be exhibited at the Artistree Community Arts Center through May 21. Stearns’ exhibit showcases his intricate knotted tapestries, whimsical vessels, and prints of his magnificent gardens. (May 4)

Jon Hanish ’84 speaks to The Jewish Journal about transitioning from a filmmaker to a rabbi. In film school, Hanish would stay connected to his Judaism by throwing Passover seders. “I kept my involvement going,” he said. “Whenever my friends wanted to cast a rabbi in their films, they’d cast me, because I was the person who was the most knowledgeable about Judaism.” (May 5)

Hebden Bridge News reports that comedian Calvin Cato ’06 recently performed at the Craft New Underground in Auburn, N.Y.  “Cato got his comedic start with the Wesleyan University stand-up Comedy Troupe Punchline and then transferred his unique brand of humor to New York City in 2006.” (May 4)

In South Coast Today, Taylor DeLoach ’13, who was chosen to be the next executive director of Alma Del Mar Charter Schools, shares her journey in education. “I have had the privilege of working with hundreds of scholars, families, and educators … and I am lucky to be able to channel the love I have for our community into the work I do every day.” (May 9)

According to Broadway World, OPERA America selected Stephanie Fleischmann ’84 as the 2022 Campbell Opera Librettist Prize recipient. Conceived and funded by acclaimed librettist and lyricist Mark Campbell, the Prize is the first award in the history of American opera created specifically to honor the work of opera librettists, and comes with a $7,000 award to support the winner’s creative and career development. (May 21)

Mike Turner P’23 is featured in an Yahoo! Entertainment article for his role on season 42 of “Survivor.” “The social game Mike played as a 57-year-old—forming strong bonds with people less than half his age—was super impressive. He won a big challenge, he dominated on the fire-making, and you know I love the way he repped Wesleyan University (where both our sons attended). He stumbled in his final Tribal, however, not presenting a clear message as to why he deserved to win.” (May 25)

Madeline Wesley ’20 is mentioned in an In These Times article about union workers who took on Amazon in New York, and won. “Wesley, 23, had been a student activist at Wesleyan University in Connecticut.” (May 23)

The American Philosophical Society announces that Alberto Ibargüen ’66 was welcomed as a new member in 2022. (May 25)

In SwimSwam Magazine, Zoe Kuhn ’26 shares why she’s excited to attend Wesleyan next fall. “I’m incredibly proud to announce that I have decided to continue my academic and athletic careers at Wesleyan University! I’m so excited to be a part of Wes swim next year! #RollCards!!” (May 24)

The Library of Congress announces that Megan Bauerle ’24 of Rochester, Minn. is one of 46 undergraduate, graduate and postgraduate students selected for its Junior Fellows Summer Internship Program. (May 27)

In The New York Times, Alex DuPuy comments in an article titled “The Root of Haiti’s Misery: Reparations to Enslavers.” (May 20)

In Business Report, via the Wall Street Journal, Royette Dubar, assistant professor of psychology, discusses how inconsistent sleep could hurt work performance. “It can be difficult to form professional relationships with colleagues if you are stressed or irritable,” she says. “And sleep deprivation can weaken the immune system.” (May 25)

In CQ Researcher Newsletter, Wesleyan President Michael Roth ’78 comments on the topic of free speech on campus. Americans “are trigger-happy with indignation.” They “get a lot out of feeling indignant,” which fuels attacks on other people’s speech, he says. (May 20)

previousClass of 2022 Known for Creativity and Resiliency