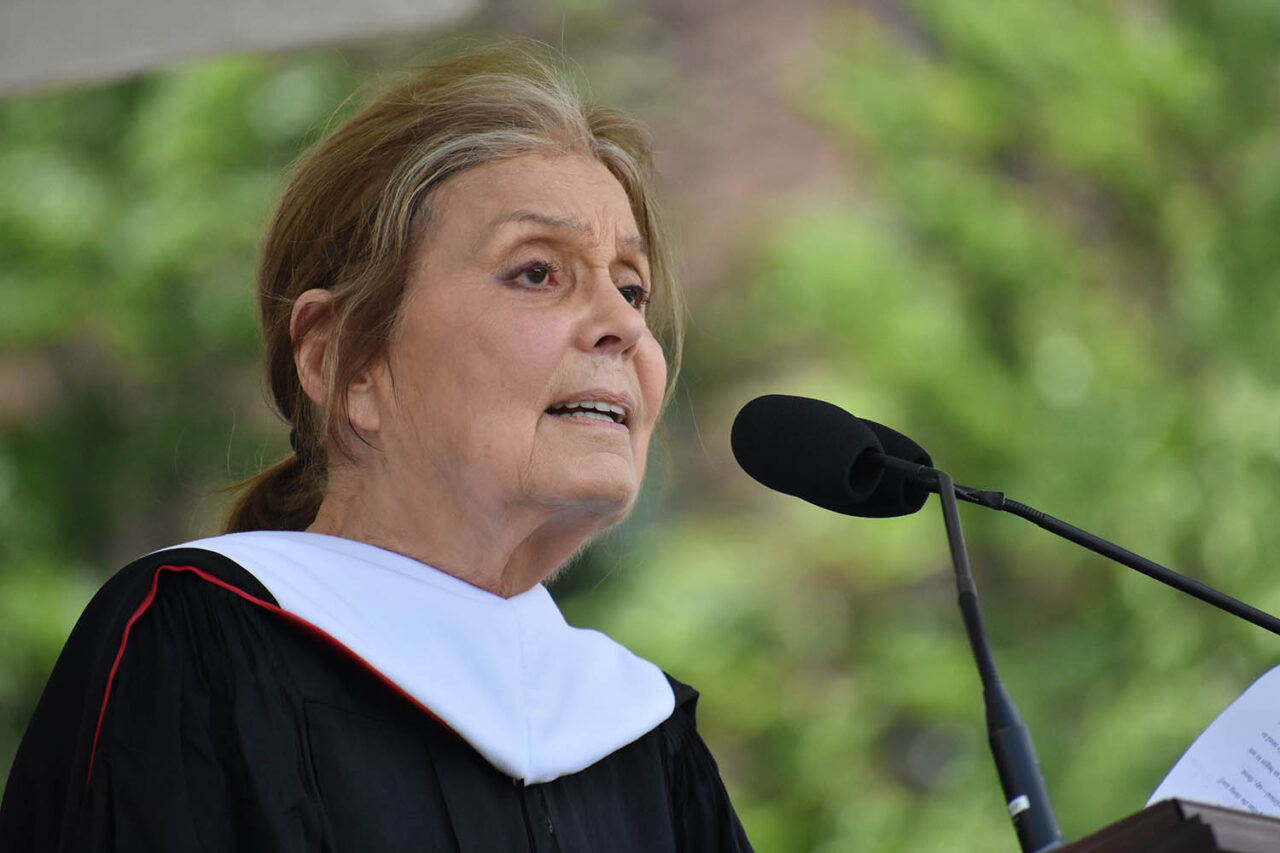 Gloria Steinem, who was named an Honorary Doctor of Humane Letters at Wesleyan’s 190th Commencement, called for the Class of 2022 to build on the steps their generation has already taken to address the ills of the world and to do so with laughter.

“You are already the generation of Black Lives Matter and Bans Off Our Bodies. You know that the amount of melanin or hormones in our bodies doesn’t change the fact that each of us arrives on this Earth as a unique miracle; one who could never have happened before and could never happen again,” Steinem said.

Steinem is known as a fearless political activist, feminist organizer, and writer who has dedicated her life and work to dismantling patriarchy and other forms of social injustice. In 1972, she co-founded Ms. magazine, and remained one of its editors for 15 years. In 1968, she helped to found New York magazine. Steinem helped establish the Ms. Foundation, one of the first and largest women’s funds in the United States; the Women’s Media Center, a nonpartisan media organization dedicated to telling the stories of women and girls; and the National Women’s Political Caucus, a group that continues to work to advance the numbers of pro-equality women in elected and appointed office at a national and state level. In 2013, President Barack Obama awarded her the Presidential Medal of Freedom.

Steinem made the following remarks during Wesleyan’s 190th Commencement Ceremony on May 22:

Dear dear graduates, families, friends of graduates, faculty, and administrators, all the workers who prepared this day, and anyone who just dropped in because, like me, you love graduations. That’s because graduations are both an end and a beginning. Statistically speaking, they are more permanent than marriages. And they are also a celebration of learning and friendships that will last you for a lifetime.

For me, this campus has very special meaning. When I was a student, this was a rare place that welcomed Vietnam vets into classes. Later, my dear friend, the late Sheila Tobias, created one of the first women’s studies programs here. Before that, history was literally His story.

Also, once when I was speaking here in the 1970s, a guy decided to streak in the tradition of the day—that is, to run across the stage with no clothes on. According to someone whose memory is better than mine, I managed to say, “For men, liberation may be streaking, but for women, it’s not having to streak.” Now I’m glad that tradition is gone for men, too.

I say all this to bring into our imaginations the many futures you will create. You are already the generation of Black Lives Matter and Bans Off Our Bodies. You know that the amount of melanin or hormones in our bodies does not change the fact that each of us arrives on this Earth as a unique miracle; one who could never have happened before and could never happen again.

And with a new global technology and a new Democratic consciousness, you will challenge the artificial boundaries that have divided us in the past. Thanks to everything from technology to COVID, we now know that we are all passengers on Spaceship Earth. Just as we all share a global danger, we share a global hope. As you may have guessed by now, I am a hope-a-holic. I believe that hope is a form of planning. Statistically speaking, about a third of the country still seems challenged by racial and gender justice. The first generation that is majority babies of color, however, has already been born. Diversity and democracy are like a tree, they grow not from the top down, but from the bottom up. And they are growing, and you are a part of that growing.

So just remember that what you do everyday matters—what you say, what you encourage, what you oppose, what you imagine, what you love with all your hearts—and that includes laughter.

In Native American traditions, there is a spirit of laughter, a will-of-the-wisp who is neither male nor female. After all, fear can be compelled, and so can love, if we are kept dependent for long enough. But nothing, nothing on Earth, can compel laughter. It happens when we suddenly learn something, when we see a contrast, or we witness the freedom of a child or an animal. And also laughter, it turns out, is good for our health.

So try never to go anywhere that does not allow you to laugh—not even a church, a temple, or a mosque. Every place must allow the freedom of laughter. And then you will know that you are free—as we all are on this great day of your stepping into the future. Thank you thank you thank you!

previousJackson '22: "The Only Person You Have to Prove Yourself to Is You"

nextWesleyan Celebrates the Class of 2022 at the 190th Commencement