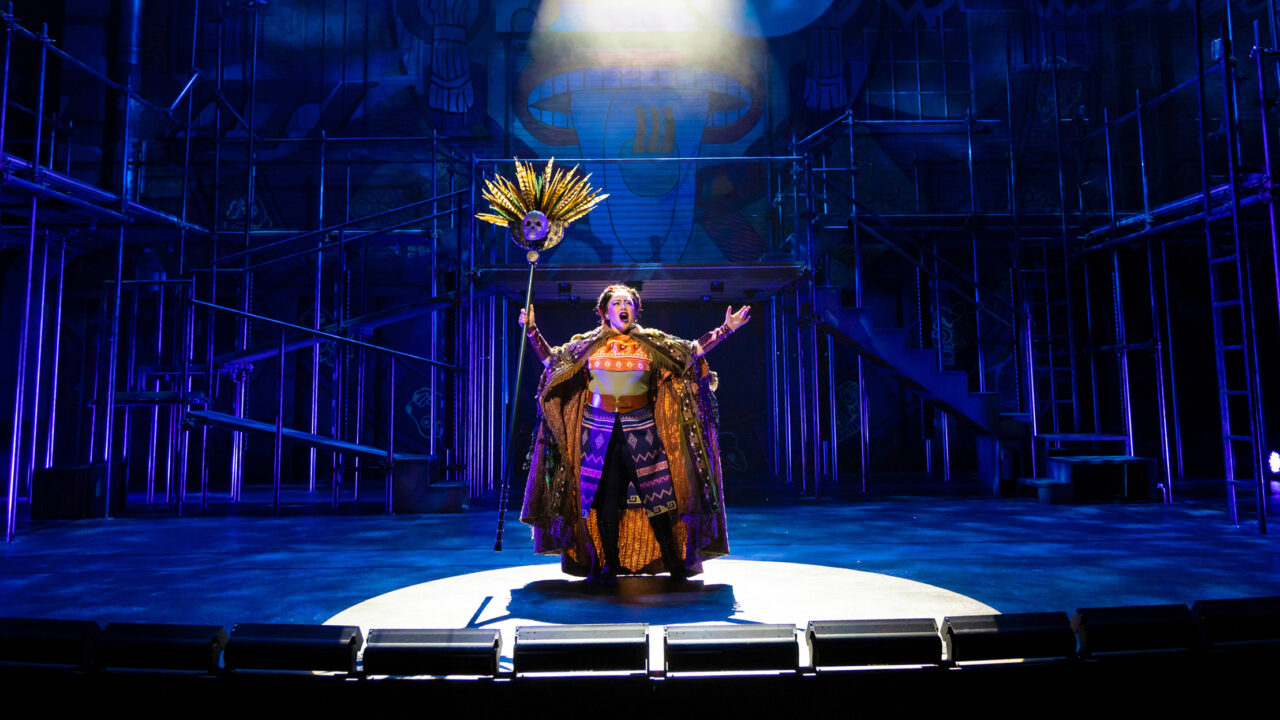 Assistant Professor of Theater Maria-Christina Oliveras was supposed to be a lawyer.

While growing up in the Bronx, Oliveras became fascinated with musicals thanks to her father, an immigrant from Puerto Rico with a passion for “Fiddler on the Roof” and “Man of La Mancha.” She performed at her high school in New Rochelle, then majored in Theater at Yale University.

As an undergraduate, she interned at the Manhattan Theatre Club and started acting professionally in “South Pacific.” After two years auditioning in New York, she pursued her M.F.A. at the National Theatre Conservatory in Denver before joining with a friend from college, Alex Timbers, who was directing “Bloody Bloody Andrew Jackson” at The Public Theater. She continued on with the show, making her Broadway debut.

“Opening night of my third show on Broadway, ‘Amélie,’ I brought my family,” recalled Oliveras. “My dad goes up to my agent and is like ‘she was supposed to be a lawyer…but I was wrong, so you take care of my girl. What’s next?’”

In 2014, she was offered a part in the play, now called “Kiss My Aztec!,” originally a screenplay by John Leguizamo with Stephen Chbosky, an adaptation of the ‘50s film “The Court Jester.” Directed by Tony Taccone, the musical premiered at the Berkeley Repertory Theatre before another 2019 California production at La Jolla Playhouse. “I love the piece, the evolution of it…it bridges together highbrow and lowbrow, which is me in a nutshell…navigating worlds, code shifting, and revisiting history in a funny way,” said Oliveras.

Oliveras continues her exploration of the show in the role of Tolima, an Aztec bruja (witch), during the show’s next pre-Broadway run at Hartford Stage in June.

“My whole career has always been new works,” said Oliveras, who sang as part of the premiere of the opera adaptation of Octavia E. Butler’s “Parable of the Sower” by Toshi Reagon, currently an artist in residence at Wesleyan’s Center for the Arts. Oliveras also sang as part of the premiere of Taylor Mac’s “A 24-Decade History of Popular Music,” which went on to receive a Connecticut premiere in an abridged version at Wesleyan.

“I think it’s vital that I’m cultivating the skills of putting myself out there and failing and being creative and being vulnerable, which is what I try to cultivate in my students,” said Oliveras, who teaches acting at Wesleyan. “I’m a better actor because of my classroom work, I’m a better teacher because of my artistic work.”

She sets up expectations of bravery from her students, who learn as part of an ensemble in her studio class. “The most important thing to me is how open you are, curious, willing to engage,” said Oliveras. “Because then those skills translate. It’s not acting, that’s life skills. How do I move through the world? What do people see, how can I effectively give that argument in the law school, how do I effectively give a presentation in my other classes? It’s a really exciting potential for building those muscles of empathy and communicating and listening and also having fun.”

Earlier this spring, Oliveras was selected as one of four Wesleyan faculty fellows who will take part in the inaugural Embodying Antiracism Think Tank during the 2022-2023 academic year. “I am thrilled,” said Oliveras. “What’s important to me is bringing more awareness of the artists and the stories that are not particularly amplified, BIPOC [Black, Indigenous, People of Color] stories, but also different ways of looking at theater and theater training…Acting is an emergency, you should have an arsenal of Meisner, Stanislavsky, the widest range of techniques possible, because you don’t know what’s going to serve in that moment.”

Oliveras is interested in bringing classical and contemporary texts in conversation with each other to explore how race can “blow open the doors” of classics like Greek and Shakespearean theater. Her Think Tank work might also manifest in a new play centered around the BIPOC experience. She’s also developing a piece with playwright Migdalia Cruz about Supreme Court Associate Justice Sonia Sotomayor.

Oliveras hopes her time in the Think Tank will help her be a better communicator in the classroom around issues of diversity. “What gets tricky and what I think is actually keeping us back is us not talking about certain things or the micro-aggressions that happen, and that we keep smiling, keep swallowing, and so I’m hoping to understand how better to navigate that, to cultivate an environment where everybody feels brave enough to speak their truth,” said Oliveras.

previous“How Societies Choose to Confront Disease:” Tan and Murray on “Strong Bodies for the Revolution” Exhibition

nextAlumni Honored for Outstanding Service, Achievement in Their Professions