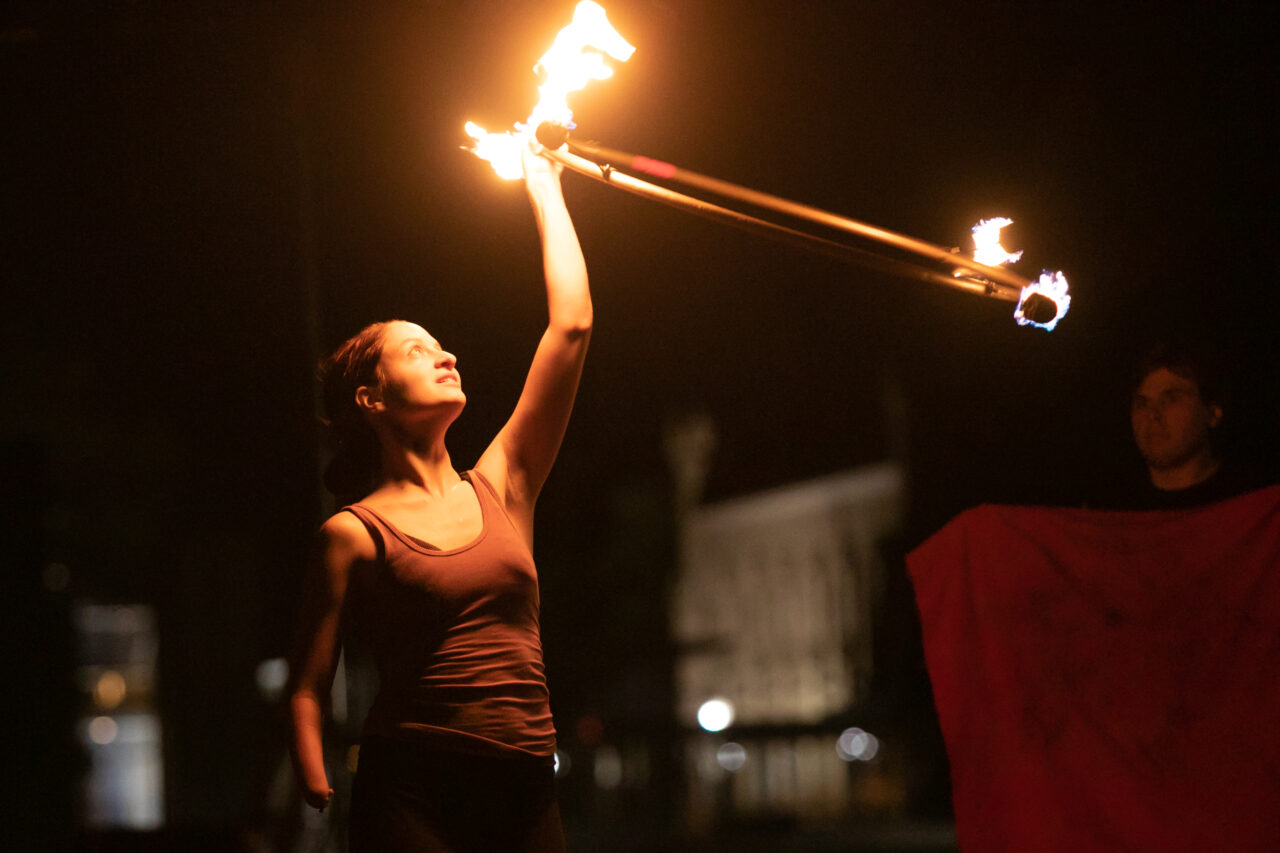 The Class of 2026 began its first week at Wesleyan moving into the dorms and finished it congregating at the base of Foss Hill, moving to a calypso groove to break the ice.

Six faculty and staff members gave new students an opportunity to learn the eclectic and diverse world dance traditions taught by the Dance Department, and then to have fun performing those energetic dances for their peers.

Assistant Professor of Dance Iddi Saaka, who has helped shape the gathering since its second year, welcomed everyone.

“Each cohort partakes and witnesses this communal event that showcases Wesleyan’s values of diversity, team spirit, and the nurturing of equity and inclusivity,” said Saaka.

He used this opportunity to introduce new students to the relationship between West African drumming and dancing. Teamwork among dancers and drummers forms the bedrock of their dance. “In Ghana, the dancer relies on the lead drummer to choreograph the dance as it unfolds,” he said.

Saaka started out playing a drum, but ultimately ended up dancing with his students, vocalizing the rhythmic patterns and cues with his headset microphone as they moved around the field in precise phrases.

Assistant Professor of the Practice in Dance Chelsie McPhilimy split the students up into six groups by birthday month, where they would have just over 20 minutes to learn a three-minute dance, which they would then perform for each other.

Students who went to work with University Professor of Dance Patricia Beaman learned the classic 1975 disco line dance “The Hustle.” This was Beaman’s first time teaching at the event. She is teaching several ballet courses this year, and “Introduction to Dance” next spring. “I had no idea how many students I would have, nor what their experience of dance was–if any–and there’s not much time to teach them,” she said. “I love introducing anybody to the thrill of dancing. I chose to teach ‘The Hustle,’ because it’s repetitive, easy to learn, and just so fun to dance.”

“Dance is about community, not competition,” said Beaman. “And it’s about democracy…anyone can and should enter into it and feel wholly welcome and safe–it’s an egalitarian arena, and by fostering a non-hierarchical atmosphere, students discover their personal potential, and often find their own voice through making dances,” she said.

Returning to the “Common Moment” this fall, Joya Powell, Assistant Professor of the Practice in Dance, taught movement phrases from the Afro-Brazilian technique called Samba Afro to the song “Ziriguidum” by Brazilian band Filhos de Jorge. “Participating in the Common Moment was such a joyous and exhilarating experience,” Powell said.

For Visiting Instructor in Dance Nik Owens ’12 and Center for Prison Education Fellow Shirley Sullivan ’21, the Common Moment brought up memories of their own experiences.

“I didn’t know anyone but very quickly met a few folks after splitting up into groups,” recalled Owens about being a member of the first incoming class to take part in the event in 2008. The excitement was comforting, and quickly led to laughter. “I still have that memory of us laughing and learning the dances together,” said Sullivan of her experience five years ago.

“It was a significant moment…Everyone is in the same boat, wanting to find their place and worried about others’ judgments,” Sullivan said about participating as a student in 2017. The event helped alleviate all those tensions. “Having everyone come together to learn a dance, something so many people feel insecure doing, and feeling free to enjoy the moment while in the mass of students around me felt liberating,” she said.

This was Owens’ second year teaching at the event, choregraphing his students to perform contemporary moves set to Sam Smith’s recent cover of Donna Summer’s influential disco hit “I Feel Love.” “It’s all about being with each other and experiencing a Common Moment with the one thing that is constant in our lives: our bodies,” Owens said.

Sullivan taught a basic salsa routine to the tune “Esa Boquita” by Puerto Rican singer Tito Nieves. “This moment helps spread love and joy to the entire student body to create a memory that lasts all four years,” said Sullivan.

Owens remembered his feelings after that first “Common Moment:” “Depletion, ecstasy, and a sense of unity.” next“Sparks start flying:” Joshua Lubin-Levy ’06 on building relationships as the new Director of the Center for the Arts