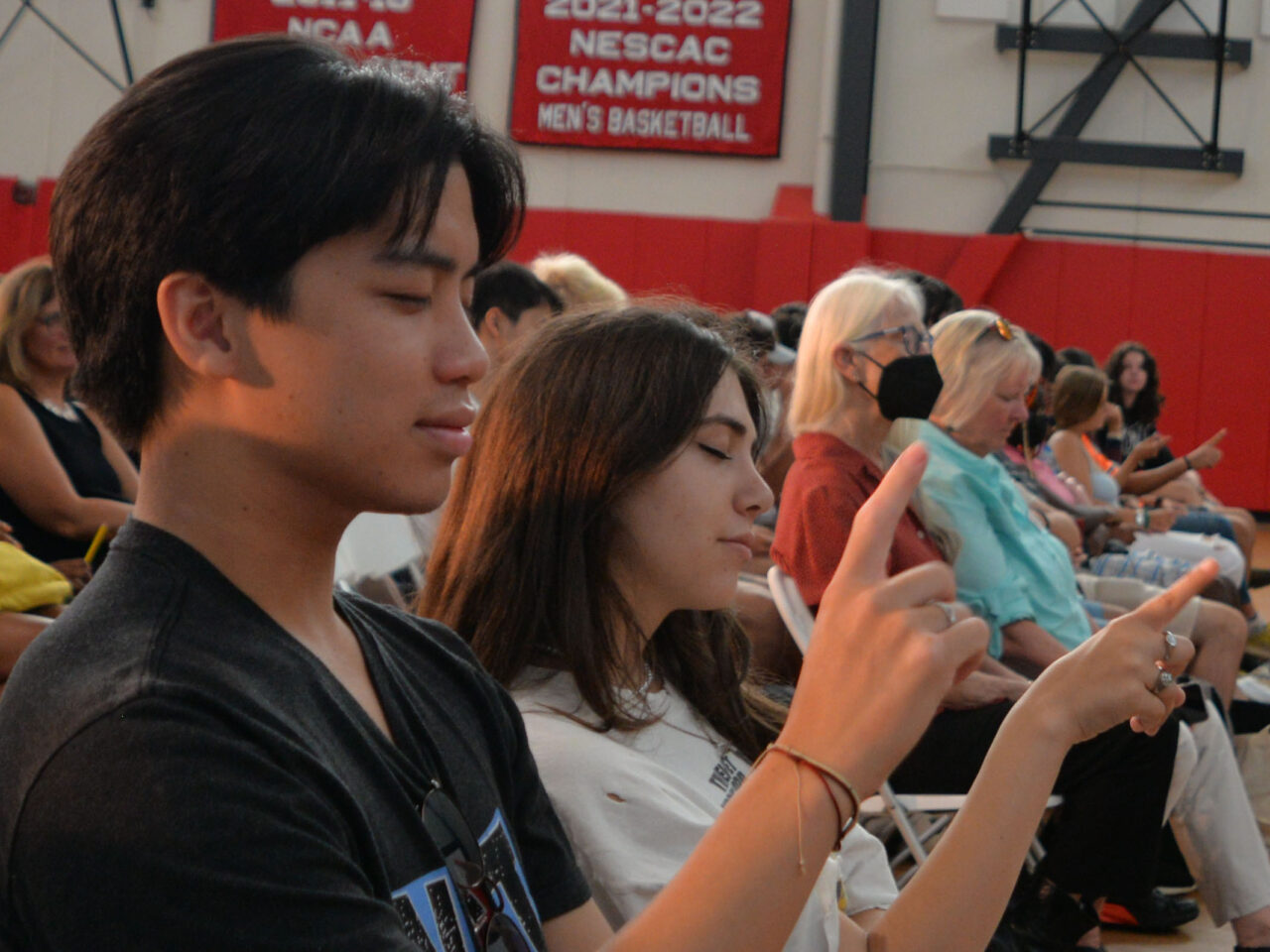 Dr. Kinari Webb, author of “The Guardians of the Trees,” held out a crayon to Wesleyan’s class of 745 first-year students at the First Listening event in Freeman Gymnasium.

She asked students to find something they could use as a magic wand (one student used a bottle of lotion) and asked them to close their eyes. “Make a wish” she asked. “Make one wish for yourself. What would you wish for if you knew it would come true?”

Students closed their eyes and the room fell silent. This was the first of three wishes she asked students to make: for themselves, for their community, and for the planet. Webb’s book, which describes her efforts to save the rainforest, was chosen as the Common Read for Wesleyan’s 2022-2023 academic year. The book’s themes of radical listening with gratitude and love were echoed through the Class of 2026’s welcoming events this week.

“What an incredible gift to be here on the first day. There is something special about someone’s first day – of work, or college, and it is a gift to be the thing they remember about their first day,” she said.

Webb found that her passion for saving rainforests and medicine was a dynamic coupling during her undergraduate study of orangutans at Gunung Palung National Park in Indonesian Borneo.

Seeking to understand why local rainforests were being destroyed, she found that in part, it was due to indigenous peoples’ need to cover health care costs. Webb went on to create Health in Harmony (HIH), a non-profit dedicated to reversing global heating.

The organization was founded on the premise of radical listening. Health in Harmony listens to the local community, and serves them by addressing their needs. It’s a drastically different from other non-profits that come from the outside with a solution to a local problem, she said.

Webb told the story of an indigenous woman she worked with in Indonesia who would never have the opportunity of education past a rudimentary elementary level. She asked the crowd to understand their education is a gift. She encouraged students to take classes that interest them, even if they don’t know yet how it will fit into their lives. The pursuit of education might be difficult, even painful, she explained, but that too is a gift.

Students asked Webb questions which spanned the spectrum from veganism (how to eat enough to stay energized), psychedelics (specifically whether she had tried Ayahuasca), where she got her dress (from a thrift shop), to whether Spinoza informed her work, and what the implications of colonialism were on the world.

Webb answered the questions earnestly, authentically, and truthfully. “Trust the universe, she will show you your power,” she said.

Students’ responses ranged from an enthusiastic round of applause when she cited that among other things, psychedelics were her way to spiritual enlightenment; gasps of disapproving disbelief when she explained that her ex-husband Cam, who features prominently in the book, married her best friend; to a thundering cheer of whoops and hollers when she told them that she’d gone on to marry the love of her life.

Rachel Zimmerman ’26 and Lucas Buu-hoan ’26 were taken with Webb’s journey. “She inspires us. She started when she was our age – 19! We came here to study film to communicate ideas to people because we want to change the world,” Zimmerman said.

Chrismerly Castillo ‘26, who wants to be a criminal justice lawyer, thinks Webb is “amazing and inspiring,” because HiH is “an organization that helps people who don’t have access to power.”

Inspired by Webb’s book and her words, 745 new students on their first day made three wishes – for themselves, their communities, and the planet – with gratitude and love.

Webb’s final wish for them: “Change and thriving is possible if you dare to imagine them,” she said.

previousWesleyan Welcomes the Class of 2026

next“Ecstasy and a sense of unity:” The Class of 2026 Experiences the Common Moment