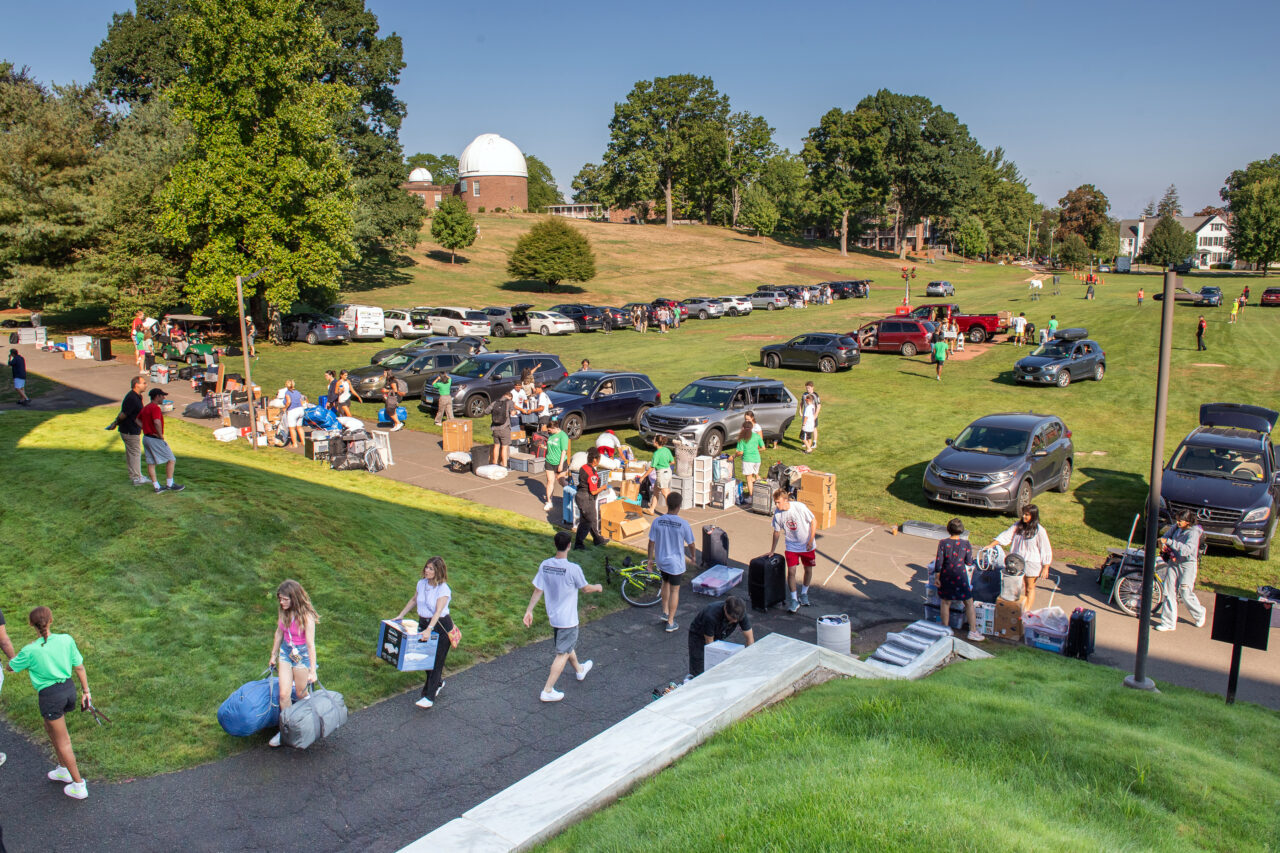 Emotions run high on Arrival Day at Wesleyan. Raw nerves live next to joy. Tears and laughs happen simultaneously. For the Class of 2026, the day is filled with hope, aspiration, and the promise a new year brings.

“I’m feeling good. A little bit nervous. In the short term, I am excited to meet new people and make amazing new friends, but then I want to find my passion and explore different academic areas,” said William Liang ’26, whose sister Mia is a member of the Class of 2023.

The 745 members of the Class of 2026, who arrived on campus August 31, bring a sense of inclusivity and passion along with their interests and accomplishments. There’s a professional Indian dancer and a licensed tax professional in the class. One student is a competitive unicyclist. Another is in the Olympic development program. Still others are writers and researchers. A third of the group were recognized as leaders in their respective high schools. All of them will have the opportunity to chart a new path.

“I’m very proud of the variety of experiences and perspectives these young scholars bring to Middletown. I’m confident their curiosity, courage, resilience, and resourcefulness will inform how they engage and contribute to our community while they are on campus and beyond,” said Amin Abdul-Malik Gonzalez ’96, Vice President and Dean of Admission and Financial Aid, in his address to parents.

The class comes to Wesleyan from 44 states and territories and 37 different countries, including Bangladesh, Chile, Nepal, Singapore, Somalia, and Ukraine. Half of the class knows a language other than English and 42 different languages are represented. “The range of talents, cultures, and family backgrounds in this group is exceptional,” Gonzalez said.

Michael Guerrero, Class Dean, met with more than 100 members of class over course of the summer, an experience he said was inspirational. “One thing that stood out to me is their compassion. I usually ask the students what their academic interests are. It always leads to a point of compassion, of helping people. There’s a culture of peace within this group. There is an energy that I am really looking forward to working with,” Guerrero said.

However, before the personal and academic journey begins, the students had to get into their dorm rooms first. Families started arriving on campus shortly before 8:30 a.m. Squadrons of eager student employees from Residential Life and student-athletes were on hand to help the first-year students move in to their new homes. (During a lull, a dozen students descended on a single car to help unload. “Nothing touches the ground,” one of the student helpers called to the group.)

“It’s very exciting to see the hustle and bustle of moving in. On the flip side of that, I am going to be leaving my baby here. But, it’s all good,” said Oscar Slaton as he moved his daughter Senica ’26 into Bennet Hall.

Nora Cabrera ’95 stopped for a moment while moving her son Antonio into Clark Hall to reflect on her first day on campus over two decades ago. “You’re going to make me cry now,” she said. “I’m feeling really excited for my son. We’ve done what we can as parents and the world is now his.”

Antonio looked forward to the chance to meet people from across the world, a common sentiment among his classmates. “I also want to join a lot of clubs. I’ve looked over the list of student organizations 10 times over, and there are a lot of things that catch my eye,” he said.

Stacey Bernstein-Haas said that saying goodbye to their family dog Berkeley might have been the hardest thing Noah Haas ’26 had to do. Noah is the first child they are sending off to college. “Honestly, I can’t imagine it and it is happening. I will truly say that I think he’s ready for this. I have a sense of calm knowing that he’s ready,” she said. Noah plans to dive into government courses and is interested in the University’s film program. “I’m also interested in human rights,” he said.

Waverly Meyers ’26 had already set up her room and was waiting for her roommate to call. Meyers, who plays defense on the women’s soccer team, was drawn to the University’s unique mix of academics and athletics. “I’m excited to widen my mind and hear other people’s perspectives,” she said.

The process of onboarding the new class began a few days before with students from across the world getting an early jump on their Wesleyan experience. Suldaan Ali ’26 came to Wesleyan from Somaliland and like his classmates, ran the gamut of emotions. “I’ve come from my family where they said their final goodbyes, but I’m going to get a chance to meet all these different people from all kinds of cultures … I’m really excited to grow as a person,” Ali said.

President Michael S. Roth ’78 hopes that growth for Wesleyan students happens in three ways: discovering what they love to do; getting better at it; and learning to share what they do well with other people.

Through a pragmatic liberal education, Wesleyan students will be poised to defend a society where inquisitiveness, curiosity, critique, and experimentation are part of the fabric of everyday life, he said.

“It doesn’t take much … just read the newspapers and realize that all this could be easily constrained, either by the forces of government, the forces of society, or the forces of peer pressure. So, I’m hoping that our students learn to pay attention with generosity and sympathy and to come to appreciate what they experience here so that off campus they can build on what they’ve learned. This could be a great little island of freedom, but it would be sad if we didn’t move out from this island to resist the tides of authoritarianism and censorship all around us,” Roth said.

Early afternoon, after the dorm rooms are set up and the parents are sent off to another part of campus, the Class of 2026 gathered on the lawn near Denison Terrace for their first time together as a group. They listened to speakers assure them that they are on the very first step on an important journey.

“I hope – I expect – that the next four years will be truly transformative for you,” said Michael Whaley, vice president for student affairs.

They then learned a charmingly ragged version of the Wesleyan fight song. It took them a few tries, but by the end, the different voices were as one.

“[The significance of today] hasn’t set in yet. It’s still feeling very far in the future even though it’s happening today. It feels like I’m kind of watching myself, but I’m very excited,” said Josie West ’26.