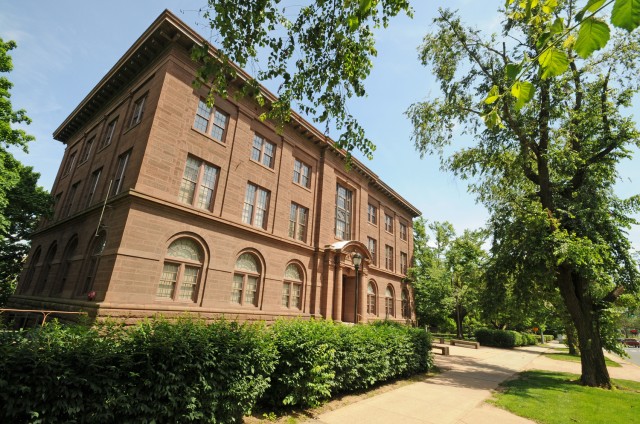 From exploring the inner workings of the European Union to helping students in Zambia learn English along with a way to advocate for themselves, Wesleyan’s recipients of the Fulbright U.S. Student program will serve the Fulbright mission of citizen to citizen diplomacy and learn about themselves in the process.

“I’ve spoken to other Fulbright (recipients) and they said when they left the program, they knew exactly what they wanted to do and they had a completely different perspective on their own situations … This program will be amazing because it will teach me all sides of the education perspective,” said Alphina Kamara ’22 who will teach English in Zambia.

Kamara, along with Andrew Finkelman ’23 (Spain), Justin Kim ’19 (South Korea), Anna Marti ’23 (Greece), and Alexandra (Lexie) Prendergast ’20 (Belgium), is part of the university’s current group of Fulbright recipients, who will travel abroad in the 2022-2023 academic year.

The Fulbright U.S. Student Program is the largest U.S. exchange program offering opportunities for students and young professionals to undertake international graduate study, advanced research, creative work, and English language teaching worldwide. Wesleyan is regularly represented amongst the pool of Fulbright scholars, and often named as a Fulbright Top Producing Institution. From 2018-2022, the University produced a total of 30 Fulbrighters.

“The Fulbright program is interested in academic excellence and in students who have their own independence of thought and an intellectual journey. But on the other hand, they are also really interested in the mission of connecting people across cultures and across nations … They are interested in how people think and how their work can contribute to the world. There is a lot of that energy at Wesleyan,” said Erica Kowsz, Assistant Director for Fellowships at the Fries Center for Global Studies.

There are several factors that make Wesleyan students particularly suited for the program, said Kowsz, who went on a Fulbright to Canada during her own academic career. Wesleyan students are used to forging their own paths on campus, which gives them a leg up in applying a Fulbright. All awards require that a student brings their own strong reasons for why they will apply for an award in a particular country and how they will accomplish their objectives once they arrive.

“Fulbright is interested in Wesleyan’s commitment to thinking about how what happens in an academic setting interacts with the real world and how that can be mobilized in a positive way,” Kowsz said.

Wesleyan’s extensive language programs also play an important role in student success with some Fulbright awards. “Some countries require a certain level in the local language and nearly all look on experience learning another language as important preparation for a Fulbright year. Because Wesleyan invests in foreign language learning, as well as training in teaching English as a second language, our students are well prepared to apply for a Fulbright award compared to those on many other campuses,” Kowsz said.

One of the common misconceptions many students have about applying for a Fulbright is that they need previous international experience to have a chance at the prestigious program. That’s not necessarily true, Kowsz said. “If someone has done a lot of work in the local community and on campus, the Fulbright program will see that other experience is giving them the skills that can be applied in a new context,” she said.

The idea of combining one’s personal passions and the ability to learn about the world, with the opportunity to do good was enticing to this group of students and recent graduates.

Anna Marti ’23, an American Studies and Education Studies double major, wasn’t even aware of the program last summer. The fellowship office reached out to her early last academic year to gauge interest. After investigating the program in Greece – she believes that Athens College, her home for the next 10 months, has a similar sense of community pride as Wesleyan – Marti decided to apply. “It seemed like the perfect mix of the two main interests that were merging throughout my time at Wesleyan,” Marti said.

Marti was awarded an English teaching assistantship and was assigned to the university’s applications and counseling office. “We live in a globally connected world,” she said. “I’ve done a lot of work looking at education systems abroad and trying to figure out how to reform the system we have,” Marti said.

Alphina Kamara ’22, a sociology and English major, wanted to take a year before she entered law or graduate school to focus her interests and potentially plot a course for herself. Her work in Zambia as an English teaching assistant allows her to get classroom experience to go along with her already well-developed interest in education advocacy – an opportunity to move outside her comfort zone, she said. “I am really excited to get involved in the community. I want to talk with a lot of locals to see what’s happening. I don’t want to go in with the perspective of projecting what I think the issues are, but understanding from the locals’ perspective how I could get involved,” Kamara said.

Prendergast ‘20, a government and College of Social Studies major, has spent the past two years working at a law firm in Boston. Her semester abroad in Paris whetted her appetite for work abroad and her post-collegiate career fired her interested in international law. Her Fulbright in Brussels will provide an immersive experience as an English teaching assistant.

She credits her time at Wesleyan with giving her the tools needed to succeed in this important posting. “I think my education encouraged me to think outside the box, ask a lot of questions and be receptive to new ideas. Wesleyan challenged my conception of things on a daily basis and I think that’s something that’s going to be very valuable,” Prendergast said.

Andrew Finkelman, ’23, a double major in Sociology and Hispanic Literatures and Cultures, will travel to Spain to serve as an English Teaching Assistant in Galicia, an autonomous region in the far northwest corner of Spain. Spain hosts one of the larger Fulbright ETA programs, which attracts more applicants than any other single Fulbright award. With over 800 applications to this program for the past two cycles running, Finkelman’s success in winning a spot in this particular program is especially notable.

Alphina Kamara, ’22, an English and Sociology major, was awarded an English Teaching Assistant Award to Zambia.  Kamara has been an activist on issues of educational equity and quality from a young age, advocating for herself and for other students who have suffered discrimination and/or neglect in school. She sees herself as offering her students a chance to gain agency and view themselves as part of a world beyond their village, town, or country. She views her family connection to West Africa (Sierra Leone & Senegal) important preparation for the environment in which she will be teaching and representing the United States.

Justin Kim, ’19, is a great example of a recent alum who has succeeded in utilizing fellowships as a means to pursue original projects in his chosen field. For Kim, that field is filmmaking. Back in 2019, Kim departed for his Watson Fellowship the summer after having graduated from Wesleyan with majors in American Studies and Film. In 2022– 2023, he will once again be going abroad as a fellow, this time as a Fulbright grantee in Filmmaking at Korean National University of the Arts in South Korea. Kim will both complete a research project on the history of South Korean film and make headway on an original docuseries. He has also been named a Mortimer Hayes-Brandeis fellow for 2022–2023, a wonderful recognition of the artistic merit of his work and a welcome addition to the support available for his proposed project.

Anna Marti, ’23, an American Studies and Education Studies double major, has been awarded an Athens College Hellenic American Educational Foundation (HAEF) English Teaching Assistantship in Greece. Marti will be assigned to the school’s University Applications and Counseling Office, where she will draw on her work in Wesleyan’s admission office, where she has most recently worked as a senior interviewer. Even before she knew whether she would be awarded the Fulbright, Marti jumped into preparing herself for the experience, enrolling in Modern Greek courses during her senior year. The preparation will serve her well when she brings the fundamentals of this less commonly taught language with her to her Fulbright year.

Alexandra (Lexie) Prendergast, ’20, a College of Social Studies and Government major, has been awarded a Fulbright English Teaching Assistantship to Belgium. Prendergast will draw on her proficiency in the French language and her substantial teaching and mentoring experience in her work with Belgian students. From her academic background, she also brings with her an interest in Belgium’s role in the European Union, including roles  like hosting plenary sessions of the European Parliament.

previous“You Just Have to Read This…” Books by Wesleyan Authors Almond ’88, Sonenberg ’82, and Vidich ’72

nextWesleyan Welcomes the Class of 2026