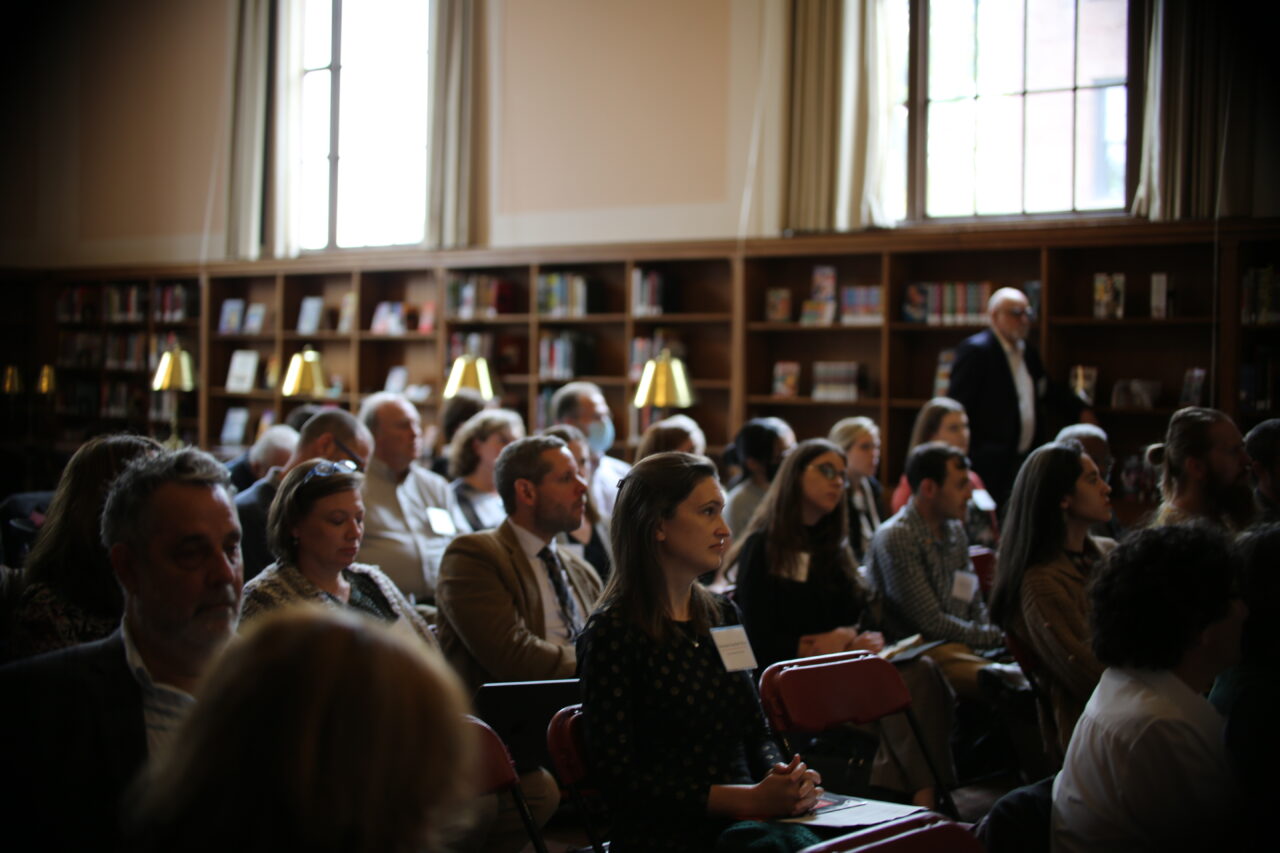 In the United States, firearms elicit clashing perceptions. They can be sources of leisure and recreation, of livelihood and profit, of grief and fear. “Guns mean different things to different people,” said Jennifer Tucker, director of the new Center for the Study of Guns and Society at Wesleyan, “and sometimes different things to the same people.”

Held over October 14 and 15, the Center’s inaugural conference brought about 150 historians, museum curators, Wesleyan students, and others to campus to explore the historical contexts around one of the most polarizing subjects in modern America. The conference, “Current Perspectives on the History of Guns and Society,” navigated seldom-explored terrain, with well-attended sessions on topics ranging from the history of firearms in Colonial and antebellum America to a headline panel discussion on history, race, and guns, moderated by CNN Opinion editor Richard Galant.

In its breadth, the conference also offered a sense of the scope of work being pursued by the Center for the Study of Guns and Society. Established in April as a hub for collaborative, interdisciplinary humanities scholarship on the social and cultural history of guns, the Center is the first of its kind in the country, taking a novel academic approach to a subject typically examined through the lenses of law, public health, and social policy.

“There is a lot we don’t know about the history of firearms in this country, ranging from technological and manufacturing aspects to the social and cultural underpinnings of gun ownership,” said Tucker, who is also an associate professor of history specializing in 19th century industrial history and technology, including the interrelationships between photography and guns. She is teaching a new Guns and Society class this semester—one of the few courses on this subject in the country.

“How did ideas about identity and guns become entwined, and with what consequences? How has gun design changed over time, and with what effects? How did U.S. society become so tolerant of the sheer scale of civilian deaths and injuries and their effects?” she added. “We only get answers to those and other questions by studying the past.”

In Olin Library’s Smith Reading Room, the conference kicked off with a panel discussion centered on how museums contextualize the fraught histories of firearms, then, later on, branched into subjects as wide-ranging as 19th-century perspectives on gun rights and a little-known US Army metric intended to gauge weapons’ killing power. During a panel on guns and visual design, Suzy Taraba, director of Special Collections and Archives at Olin Library, highlighted a selection of artists’ books tackling gun violence and associated topics, on display in the library’s “Artists Fight Back: Exhibiting Violence in Society” exhibit. Later, Joseph Slaughter, the Center’s associate director and visiting assistant professor of the practice in Religion and History, moderated a session on religious groups’ wide-ranging attitudes toward firearms.

“All of this has been so extensively cataloged by economic and technological historians who were just excited about guns, but those stories had a lot of problematic and hidden histories,” said Gidal, a College of Social Studies and economics double major. “Because they’d clearly not been told before, tracing those down felt very exciting.”

In the headline event at Beckham Hall, an animated discussion among three panelists connected the history of firearms to current events. Washington Post columnist Karen Attiah recounted visiting a Texas gun show after the fall of Roe v. Wade and encountering firearms dealers trying to convince her to buy a weapon to protect herself from sexual assault, spurring her to dig into the links between guns and maternal mortality. Later, Kathleen Belew, a Northwestern University history professor and author of Bring the War Home: The White Power Movement and Paramilitary America, shared her misgivings about private citizens fighting in the conflict in Ukraine, noting that the Contras of the 1980s enabled America’s nascent white power movement to practice the deliberate violence it sought to employ after their return. “There’s no way that American mercenary combat does not support anti-democratic violence and civilian death tolls at home,” Belew said.

And when the moderator asked panelists to pick an instructive gun-related moment in American history, Darrell A.H. Miller, a Duke law professor and a member of the Center’s advisory board, took a different tack. Citing the Supreme Court’s recent ruling in New York State Rifle & Pistol Association, Inc. v. Bruen, Miller said our rights as citizens are contingent on our understanding of history, and that the Center’s search for reliable historical data related to guns is essential to preventing an “ersatz history” based on “hagiography or invented traditions.”

Ultimately, Tucker added, “By learning more about gun history, we will paint a more complete picture of our country’s social, economic, and industrial past and present.”

Visit the Center for the Study of Guns and Society for more information and updates on upcoming events.

previousHow Do You Love Yourself and Others?