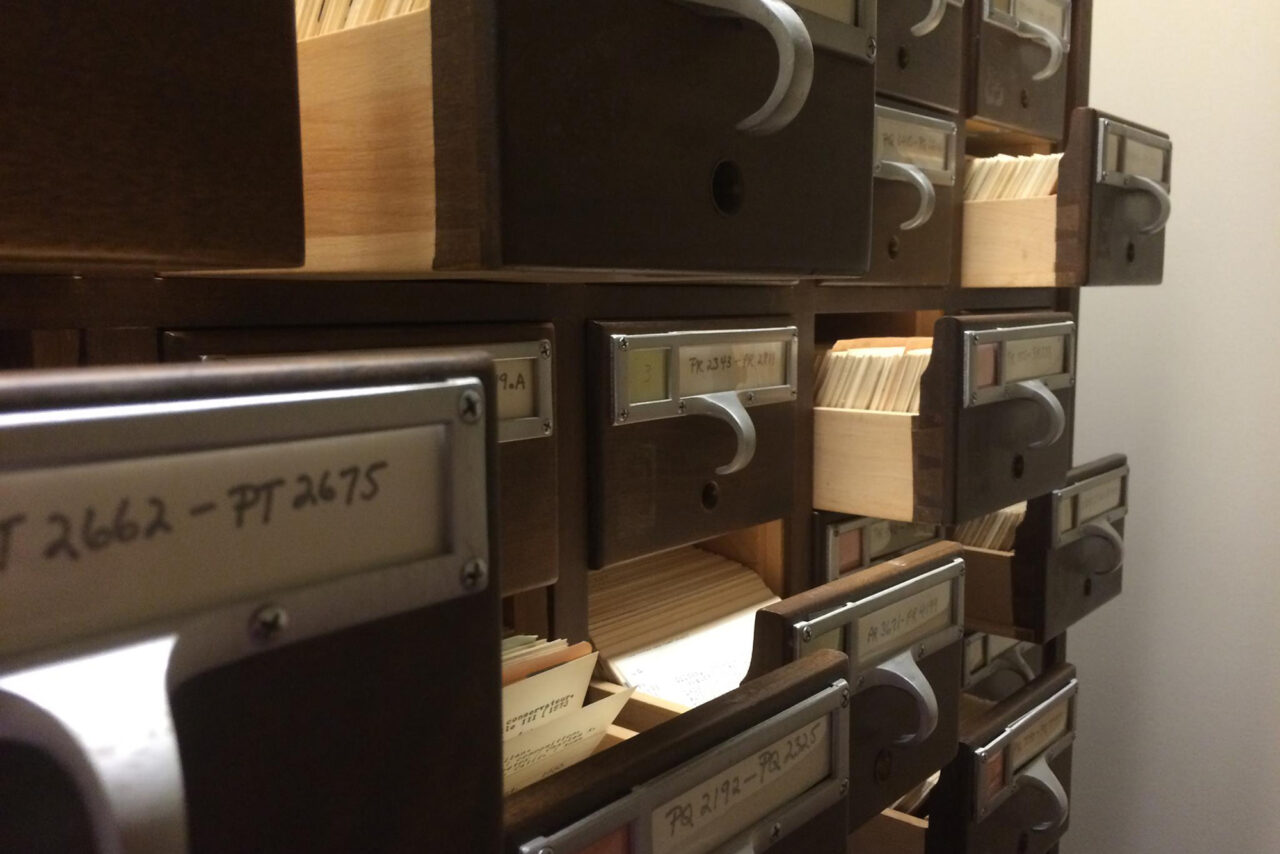 You wouldn’t necessarily think of a library catalog search as a moment where social justice issues come into play.

But for the staff of the Wesleyan University Library and the managers of the campus’s museum collections, the words chosen to describe their materials, called descriptive metadata, present a unique opportunity to be mindful of equity, fairness and inclusion – not to mention accuracy.

“There are two goals. When people are looking for information, they need terms that are going to help them find what they need. The second part is that when they are looking for something about themselves, they see resources that represent their identity in a respectful way, in a way that shows their identity is valued,” said Rebecca McCallum, head of cataloging at the library.

A group of librarians, collections managers, and archivists have gotten together over the past several months to carefully research the topic. Informally called Team C, they’ve taken on the task of examining the library’s current cataloging practices. Words matter, and that is a guiding principle of the committee’s work.

“A lot of the interrogation that we are doing on our descriptive practices focuses on using language that centers a person’s humanity,” said Wendi Field Murray, archeology collections manager.

Library records are dependent on what is called controlled vocabulary. “When you add subject terms to a catalog record you want to make sure the term is consistent so that any person looking for a particular topic has just one term to look for,” McCallum said.  Like most academic libraries across the United States, Wesleyan’s library draws on terms from the Library of Congress Subject Headings (LCSH).

Since LCSH was first released around 1909, individual librarians have worked to improve LCSH, striving to make it more inclusive and accurate by replacing offensive or racist terms with language that more respectfully describes people from all backgrounds. These efforts gained national attention in recent years over objections to the term ‘Illegal aliens.’ In 2013, students at Dartmouth College came across the phrase and argued that no person is inherently illegal and that the word alien is dehumanizing. They appealed to the Library of Congress and the terms were changed in 2016 to ‘Noncitizens’ and ‘Unauthorized immigration.’ The U.S. House of Representatives then tackled the issue, pressuring the Library of Congress to reverse its decision through an appropriation bill, the first time the body ever weighed in on a subject heading.

“For decades individual libraries didn’t use their own subject search terms. They’d choose from the list of approved terms from the Library of Congress. When the controversy erupted about the term ‘Illegal aliens,’ that was the first time that libraries decided that they might want to change things up a bit,” McCallum said.

It would be impossible to fix every library record with that term individually, but with the help of a back-end programming script written by other institutions, McCallum and her team are able to take care of changing this term all at once. “Libraries tend to be very collaborative, and thankfully another school shared their programming script, which I could then import into our system,” McCallum said. In 2021, the Library of Congress did finally change the approved term to a combination of “Noncitizens” and “Illegal immigration,” but many librarians are not satisfied with that outcome, and prefer the term “Undocumented immigrants.”

There are an enormous number of terms that still warrant changing, and many more concepts that are simply absent from LCSH. Librarians across the country are constantly working to improve the system, but also looking to other sources of terminology. (For a more thorough investigation into Library of Congress Subject Headings, take a look at this article by Tina Gross: “Search Terms Up for Debate: The Politics and Purpose of Library Subject Headings.”)

Murray is embarking on a similar process of examination when reviewing how the university’s Archaeology & Anthropology Collections are cataloged. For example, it is conventional museum practice to refer to a collection by the name of the collector or donor, rather than by the names of the Indigenous artisans or communities who created the work. Murray points out that descriptions of museum objects often have a Eurocentric perspective, so taking a careful look at labeling is just one component of decolonizing your museum.

Murray’s students have already learned a bit about this process, deconstructing exhibit labels and catalog entries in their coursework with her. “They were really engaged and very surprised at how different the message was when you change just a couple of words,” Murray said.

Team C’s job is a daunting one. A consideration of how people and historical events are described moves quickly to larger cultural questions. Through a careful, thoughtful dialogue within the University’s library and collections and with the community as a whole, McCallum, Murray, and their colleagues hope they can raise awareness about the systems used for describing these records of human knowledge and experience, and along the way contribute to improvements in these systems.

“We don’t want the language we use to normalize alienation. People shouldn’t see central aspects of their identity codified in a catalog as ‘other,’” Murray said.

Right now the committee is working on ways that the Wesleyan community can participate in the process of improving the library’s metadata.  Until then, if you are especially interested in the topic, reach out to rmccallum@wesleyan.edu or wmurray01@wesleyan.edu.

nextWesleyan in the News, November 2022