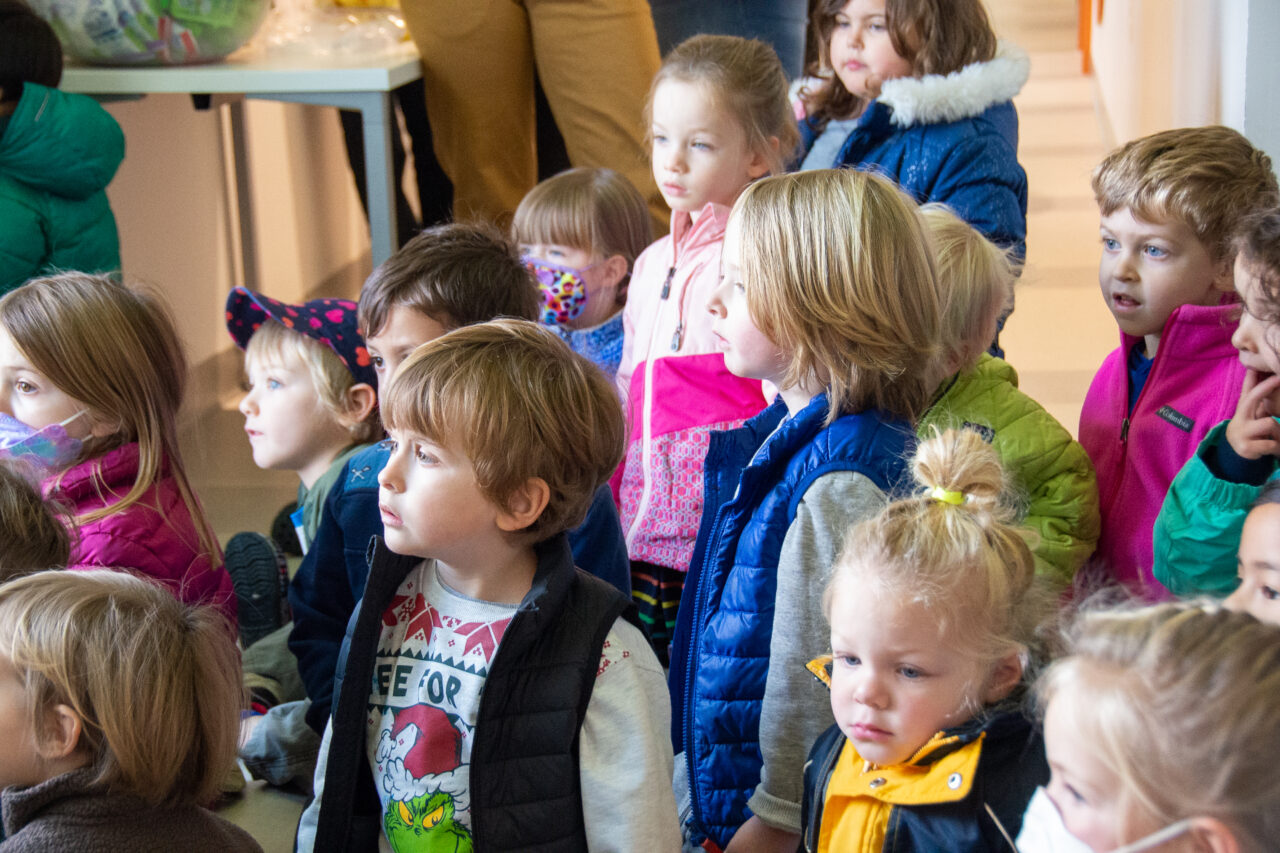 An informal poll of a group of three- to five-year-old kids at the recently opened Neighborhood Preschool concluded that the best part of their new school is that they get a chance to climb indoors.

And play in the pretend kitchen.
The blocks and trains aren’t too bad either.
And they like being able to go on the playground.

“You seem pretty excited about it, buddy,” a dad said to his son. “Yeah!” the child responded.

The students and their teachers, architects, and staff members gathered on Thursday, December 8 to cut a construction paper ribbon the kids had decorated to mark the formal opening of the school. “This is the coolest preschool I have been to in a very long time. When I went to preschool, I had to ride up to it on a dinosaur,” President Michael S. Roth ’78, told the children, prompting a laugh.

Students moved into the 7,000 square-foot space located at 60 Long Lane in September. “It’s really wonderful to see the building come alive with the kids in it,” said Jennifer Shea, senior associate at New Haven’s Patriquin Architects and the architect on the project.

The new facility, replacing old structures on Lawn and High streets, is bright and cheery. Large windows offer a lovely view of Wesleyan’s athletic fields. “At the end of the day we can see the sunset,” said Erin Brown, a teacher. Each class can access the playground from their own room. The building, with fluid classroom and play spaces, allows for an open educational environment–in short, a real learning community.

The little ones were all smiles and laughs during the event, but it took time for the children to become acclimated to the idea of being at a new school, said Stefanie Dinneen, an NPS board member and administrative assistant in the astronomy department. In an effort to help the children prepare for the move, teachers and parents read books about change to the children, and guided conversations about what they could expect upon arrival.

As it turns out, the kids were ready. Dinneen said from the first moments the students arrived at the school, they flooded into their classrooms and onto the adjacent playground and quickly made it their own. “We are finally all together playing on the same playground,” Dinneen said, alluding to the set up in the old spaces, where children were separated between the two buildings.

After handing out gifts to each class, Roth read to the students from “When Will It Snow?” by Marty Crisp, illustrated by Viv Eisner. The students then headed back to their rooms for a snack, and the work of the school went on, livelier than before. “We are really grateful to be here,” Dinneen said.