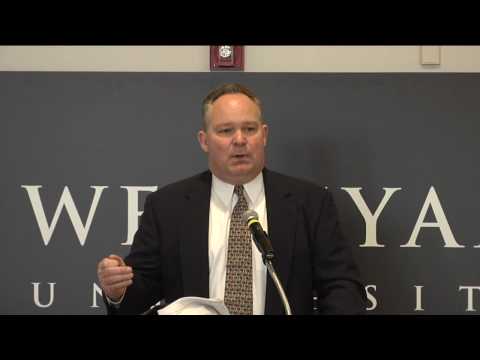 Mike Whalen ’83 was named assistant athletic director and head coach of Wesleyan University’s football team. He will assume this post on April 1.

Whalen was introduced to the campus community at a ceremony on Monday, March 8.

Whalen, the 2006 NESCAC Coach of the year, comes to Wesleyan from Williams College, where he had been the head coach since 2004. During that time, Whalen’s teams posted a 38-10 record.

“It is an honor and a true pleasure to welcome Coach Whalen back to Wesleyan,” says John Biddiscombe, director of athletics and chair, physical education. “He left as a standout college player and returns as one of the finest college football coaches in the nation.”

President Michael Roth says: “We are excited about the levels of excellence that he expects on and off the field from the scholar-athletes he coaches and recruits. We are confident that he can ensure the success we expect both in the classroom and in athletic competition here at Wesleyan, and his success and experience will be an asset to the overall athletic program.”

In his first two seasons as football coach at Williams, Whalen guided the Ephs to consecutive 6-2 seasons, highlighted by winning the final six games of the 2005 season and defeating arch rival Amherst to win the Little Three title. In 2006, Whalen extended the Eph win streak to 14 as he compiled just the sixth perfect season in Williams football history, leading the team to an 8-0 record. Mike Whalen ’83 comes to Wesleyan from Williams College, where he has been the football team's head coach since 2004.

Along with being named the 2006 NESCAC Coach of the Year, Whalen is the recipient of many coaching honors, including selection as a finalist for the prestigious 2006 Liberty Mutual Coach of the Year Award, which is presented to the nation’s top coach in all divisions. Whalen was the only Division III coach among the 16 finalists. He has also received the Johnny Vaught Head Coaching Award from the All-American Foundation and was named the Master Sports University/College Coach of the Year.

Whalen has had at least one Eph offensive lineman named All-NESCAC First Team every season. He has coached the only player in NESCAC and ECAC-Northeast history to win back-to-back Offensive Player of the Year awards.

As the head coach of Williams wrestling, Whalen had 36 All-New England performers. In 2000 he was named the NECCWA Coach of the Year for leading Williams to a second place finish among the 15 teams in the region. NECCWA named Whalen the Rookie Coach of the Year in 1997, as well.

While an undergraduate at Wesleyan, Whalen captained the football team, earning All-New England recognition three times and an honorable-mention All-America honors an offensive lineman.  He was also a captain of the wrestling team, a four-time all-New England wrestling honoree as a heavyweight, and the first wrestler to win four consecutive NECCWA titles. While an undergraduate at Wesleyan, Whalen, at left, captained both the football and wrestling teams, earning All-New England and All-American honors three times.

Whalen’s coaching career began at Wesleyan during the 1983-84 academic year when he served as an assistant defensive line coach and assistant wrestling coach. He went on to Springfield College in 1984 where he served as a graduate assistant in both football and wrestling while earning a master’s in physical education. Upon completing his degree requirements at Springfield, Whalen joined the staff at the University of Pennsylvania, and the 1986 Quakers went undefeated and won the Ivy League title. From Penn Whalen moved on to Lafayette College, where the Leopards won the Colonial League title in 1988 and the Patriot League title in 1989. In 1993, Whalen went to Colgate University, where he was the Associate Head Coach and offensive line coach for the Red Raiders.

Whalen’s wife Karen, and his two sons Luke and Jake, are excited about joining the Wesleyan community, as well.