Arion Blas '11 and Kaishi Lee '09 listen to a talk at J.P. Morgan Chase in New York City on Oct. 27 during Wesleyan's Management and Leadership Conference.

Blas and 29 other Wesleyan students learned about management from experts and executives from top companies, organizations and institutions, while participating in skill-building through lectures, hands-on workshops, case studies, and one-on-one mentoring with top Wesleyan alumni and parents from a variety of career fields.

“I participated in the conference to explore different career options,” says Blas, an economics major. “It was neat to meet so many Wesleyan alumni who are working in investment banking and related areas. We got to learn about what they do and how major companies work.”

The event began with a reception at Beckham Hall, where Wesleyan President Michael Roth ’78 welcomed students, alumni and parents, and introduced the event’s keynote speaker, Strauss Zelnick ’79, founder of Zelnickmedia.

On Oct. 25, Brad Karsh ’87, President of JobBound.com, led the conference with a talk on resume and cover letter writing, interview skills and ways to find a job.

“Brad Karsh was by far the best speaker due to his incredible enthusiasm, articulation and animation, though I must say my conversations with government officials and cable network executives were also fascinating,” says government major Findlay Walsh ’11, a transfer student who already has an associates degree in business. “I attended the conference because I see myself as a leader and want to further understand this role as it applies to my interest in working for the federal government. I see management as a highly fluid skill: one that applies to every aspect of success in life.”

Emmanuel Kaparakis, director of the Quantitative Analysis Center, led a half-day discussion on “Business Basics.” This two part session provided students with an overview of the financial environment in which an enterprise entity operates. Participants gained an understanding of the money creation process and the structure of our banking system, sources of funding, the use of information sources, and financial statements.

“Mr. Kaparakis’s talk was very interesting from an economics point of view,” Blas says. “He taught us about the history of money, how it is created and how the financial system works, and equity and the stock market. It was good information to know in light of the current economic crisis.”

Michael Sciola, director of the Career Resource Center and Persephone Hall, associate director, then gave students a personality test and survey. The test results explained how the students work best within a group setting.

Mathematics and economics major Kaishi Lee ’09 attended the conference to learn ways to translate management and leadership skills into her future career. She enjoyed meeting peers with similar interests, and creating networks with alumni .

“I really enjoyed Strauss Zelnick’s keynote during the opening dinner, where he shared the roots of his career success which stemmed from his years at Wesleyan, and it was very humbling to hear Muzzy Rosenblatt speak about his taking his committee from failure to success through effective leadership from management,” Lee says.

The event was sponsored by the Career Advisory Council. Photos, taken by Nick Russell ’09 and Brian Frenette, CRC project coordinator, are below: 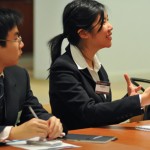 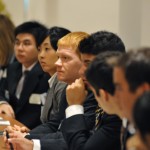 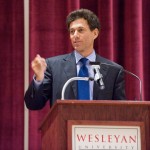 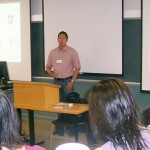 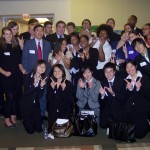 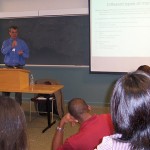 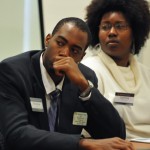 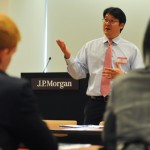 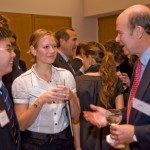 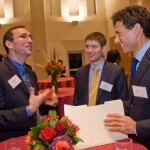 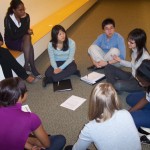 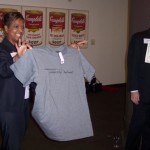