Applications to Wesleyan Up 22% From Last Year 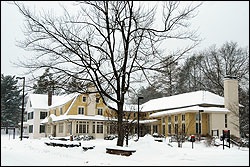 Applications for admission to Wesleyan rose 22% this year.

In January, Hargrave Meislahn and the rest of the admissions staff were officially allowed to not only exhale but to even crow a bit. Early decision applications finished up 34 percent from 2007. Overall applications for admission to Wesleyan saw a 22 percent increase from the previous year; this included more than 2,200 filed electronically at the December 31 deadline.

“It is extremely encouraging to see the great numbers of people around the country who agree with our self-perception and want to come here,” says Wesleyan President Michael S. Roth. “Given the international economic crisis and all the uncertainties that go with it, this is very good news.”

“The exact numbers we get in admissions from other institutions tend to be confidential, but what we have heard in general is that most schools’ application rates are either up slightly, flat or below what they had last year,” says Greg Pyke, senior associate dean of admission. “In fact, I know of at least one that, after seeing a double-digit increase last year, was down over all this year.”

All of which brings forth a simple question: Why?

“There is no simple answer,” Roth says. “We believe there are a lot of factors that may have contributed. Certainly the teaching and scholarship at Wesleyan is at an elite level, and we have worked hard to let people know about that through our admissions and communications efforts, but it’s still pretty early in the process and we can’t really say with confidence yet what caused this increase.”

Still, Roth points out, Wesleyan has put significant effort into increasing the depth and quality of admissions applicants in recent years. Meislahn’s team has increased its efforts in reaching out to more guidance counselors and students, and have been increasing informational and recruitment visits to the South, Midwest, and Texas, among other parts of the country. Wesleyan also recently forged a partnership with QuestBridge, an organization that helps identify appropriate students from low-income and underserved backgrounds. Admissions also re-vamped the on campus tour to show more of Wesleyan to visitors. At the same time, University Communications has been working to refine and improve the information getting out about Wesleyan through the web, the news media and to selected audiences.

“Everyone has played a role in this,” Roth says. “Virtually every department and individual working here contributes to what makes Wesleyan so appealing to applicants.”

Does that include last year’s graduation speaker and the exposure he generated?

“It was an honor to have President Obama here, and the exposure his Commencement speech garnered certainly put Wesleyan squarely in the public eye,” Roth said. “But I wouldn’t say that he is the single reason that more students are looking to come here, or that the election results have inspired a movement to suddenly embrace the idea of a progressive liberal arts education. After all, Duke and Stanford saw substantial increases in their applications, too. I think what we’re seeing in our admissions applications is a reaction to the type of institution that we all know Wesleyan is. Word has been getting out that this is a special place. I think people are responding to that.”