The Mexican Ministry of Foreign Affairs has presented its annual award for best doctoral thesis on Mexican foreign relations to Amelia Kiddle, the Andrew W. Mellon postdoctoral fellow in Latin American Studies at Wesleyan’s Center for the Americas.

Kiddle is the first winner to have completed her doctorate outside Mexico.  The prize is worth about $8,000 and includes a commitment to publish the Spanish-language version of her dissertation, “La Política del Buen Amigo: Mexican–Latin American Relations during the Presidency of Lázaro Cárdenas, 1934-1940.”

Kiddle, now in the first year of her two-year fellowship, considers her receipt of the award a sign of Mexico’s “desire to promote international cultural exchange,” and of Mexican intellectuals’ interest in “dialogue with English-speaking scholars of Mexican history.”

She plans to revise the dissertation for English-language publication while at Wesleyan. The project examines cultural diplomacy and Mexico’s relations with other Latin American nations during the administration of Cárdenas, whom Kiddle regards as “the most revolutionary of the post-revolutionary presidents” because he championed the organization of workers, spearheaded an unprecedented agrarian reform, and expropriated foreign oil companies operating in Mexico, creating the national oil industry PEMEX.  His revolutionary reforms earned him the enduring loyalty of large segments of the Mexican population, and a radical reputation throughout Latin America.

The past year has been busy and fruitful for Kiddle, a Canadian who earned her doctorate in Latin American history in 2010 from the University of Arizona. In addition to winning the award, which she accepted at a ceremony in Mexico City on December 3rd, she began teaching at Wesleyan, and published both a co-edited volume and a journal article.

The article, “Cabaretistas and Indias Bonitas: Gender and Representations of Mexico in the Americas during the Cárdenas Era” which appeared in the May issue of the Journal of Latin American Studies, explores Mexican diplomats’ reaction to a female Mexican dance troupe working in the red light district of Panama City in 1940, and the wider debate about how Mexico should be presented abroad.

The book, “Populism in Twentieth Century Mexico: The Presidencies of Lázaro Cárdenas and Luis Echeverría,” was published by the University of Arizona Press. Kiddle contributed a chapter to it on the 1970 funeral of President Cárdenas.

At Wesleyan she is teaching courses on Mexican history and helping to plan the Center for the Americas’ bi-annual conference, “The Americas Forum,” scheduled to take place at Wesleyan in spring 2012.

This spring Kiddle is teaching a seminar called “Histories of/History and the US-Mexican Border,” examines the history and historiography of the border from the colonial period to the present. In the fall she taught a course in the history of Mexico from 1810 to 2010. 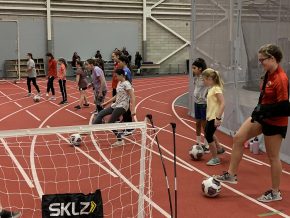