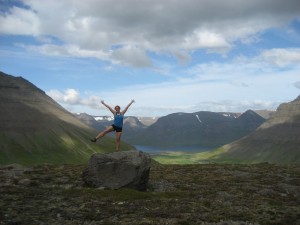 Rosemary Ostfeld ’10, MA ’11, an E&ES and biology major, is a semi-finalist for Sierra Club’s “Best Internship on Earth.” The winner will spend the summer video-blogging on different Sierra Club outings sponsored by the club’s Inner City Outings, Building Bridges to the Outdoors, and Volunteer Vacations programs.

A four-year member of Wesleyan’s Outing Club and former house manager of OutHouse, Ostfeld also developed and led an outdoor program for Snow Elementary School in Middletown. She says that Suzanne O’Connell, associate professor of earth and environmental sciences and director of service learning, encouraged her to apply for the internship with the Sierra Club.

She had learned about documentary film making in FILM 140, “Making the Science Documentary” a service learning course that she took in 2007, with Adjunct Assistant Professor of Film Studies Jacob Bricca and Associate Professor of Molecular Biology and Biochemistry Manju Hingorani.

Ostfeld received the good news that she’d made it to the semi-finals, along with a message from the contest officials telling her, “This week, we’re inviting folks to view the videos and leave comments to let us know who they would like to see get the position and become our Outdoors Youth Ambassador. While this won’t be the determining factor in who we choose, we’ll be looking to see who’s getting attention.”

Ostfeld (“Contestant 21”) invites you to view her video entry and submit your comments.

(See an earlier WesLive for further information on Hingorani and Bricca’s course.)