Approximately 115 students from the Woodside Intermediate School in Cromwell joined Wesleyan student-athletes from the men’s and women’s basketball, men’s and women’s ice hockey, football, softball, women’s tennis and wrestling teams and the rugby club for an hour in the Bacon Field House for “recess.”

Three play stations were set up, allowing groups of third- to fifth-graders from Woodside to interact with the Wesleyan students in kickball, capture the flag, red light/green light and basketball.

The Wesleyan football team, through an arrangement between assistant coach Jeff McDonald and Woodside principal Bo Ryan, who met during their college years in the mid-1990s, has been frequenting the school since the fall.

Team members have helped out during recess, while the students were preparing for the Connecticut Mastery Tests, and in other capacities to aid the students and teachers at Woodside. On Thursday, April 7, Wesleyan hosted five students from each of the 21 classes (with a few wild card selections) for a very active hour of fun.

“This whole arrangement is unreal,” says Woodside Principal Bo Ryan. “ It has blossomed into an amazing relationship and our kids absolutely love it. It’s not just that the Wesleyan students come by. They are so actively engaged with our students. It is just amazing.”

More activity between Wesleyan and Woodside is planned for the future.

Below are video highlights and event photos: 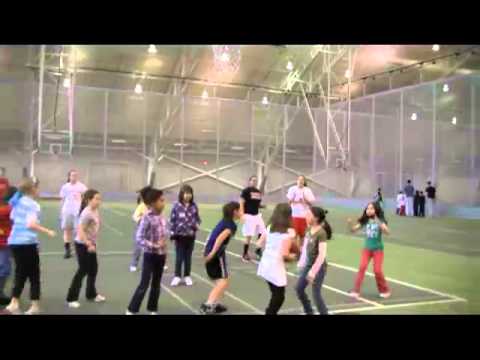 At left, rugby team member Daniele Packard ’13 and wrestler Howard Tobochnik '13 shout to students during a game of capture-the-flag. Three play stations were set up, allowing groups of 3rd-5th grade students from Woodside to interact with the Wesleyan students in kickball, capture-the-flag, green light/red light and basketball. Pictured in the center, wearing a black shirt is Amber Wessells '14, a guard on the women's basketball team.