Q&As with outstanding students is an occasional feature of The Wesleyan Connection. This issue we speak with Grace Ross from the Class of 2012.

Q: Grace, you’ll be graduating this May with a double major in English and American Studies. Why did you choose to major in those areas?

A: It was the American Literature survey course I took with Joel Pfister my freshman fall that drew me to English and American Studies. We read Mary Rowlandson’s Indian captivity narrative. Professor Pfister essentially summarized what I had been attempting to argue in A.P. U.S. History and offered analysis far beyond the scope of my high school research paper. I knew then that I wanted to major in both.

Q: You recently attended the Center for America’s Americas Forum on April 20, which focused on “Authenticity in the Americas: Constructions and Contestations of Identity.” (View photos of the event online here). Can you elaborate on what was discussed in this four-hour event?

A: The panel was structured around “authenticity” and how it functions within identity formation, nation building, and oppressive systems in North and South America. The panel was composed of six authors we had read throughout the semester: Daphne Brooks, Rebecca Earle, Ben Irvin, Jeff Pilcher, Scott Lyons and Florence Babb. Our Wesleyan professors (and postdoctoral fellows) Amelia Kiddle and Christian Gonzales, spearheaded the effort to find authors who could participate and mediated the event. It was primarily targeted toward the students, although many faculty were present. I was most excited to talk with Daphne Brooks, as she provided a key perspective in my thesis and I was most familiar with her work. She also teaches English and African-American studies at Princeton.

Q: In 2010, you spent your summer working at the Library of Congress in Washington D.C. collecting, documenting, and transcribing surveys and managing all the archival material. Is this something you’d like to do more of?

A: Getting to know the Library of Congress was a rewarding experience and showed me a side of D.C. that I wouldn’t otherwise have been exposed to. It’s been illuminating to delve into the topic of ethical codes in human subject research. But, I’m really an extrovert. As much as I love working with archival material, I don’t see myself spending too much time in an archive, unless it’s research for a graduate thesis or maybe even a book way down the road.

Q: Tell us more about the student-run a cappella group, the Mixolydians.

A: The Mixolydians is an ensemble group that performs choral music. Our final concert this spring includes pieces in French, Russian, English and Latin ranging from the past 300 years.

Q: What other organizations, services or clubs did you take part in during your four years at Wesleyan?

A: I rode on the Equestrian Team for three years, which provided a good excuse to get off campus every week and to be around horses. Right now, I’m volunteering for Julia Star, a program that sends Wesleyan students to talk with fifth graders about stereotypes and difference. I also served as a member of the English Department Majors Committee, promoting the major to pre-frosh and underclassmen.

Q: What are you going to miss most about Wesleyan, and what are your post-Wesleyan plans?

A: I think I’m going to miss the people here most. Everyone you meet on this campus has a passion and has something to offer the world. Ultimately, the late night conversations, unexpected interactions, and multitude of events, performances, and shows will make me most nostalgic. After completing my thesis, I decided to take this summer off and travel around the world. Beyond that, I plan to move to New York in September with my sights set on the publishing industry. 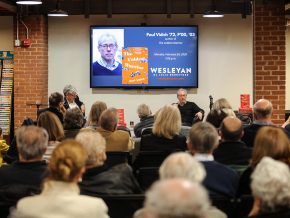