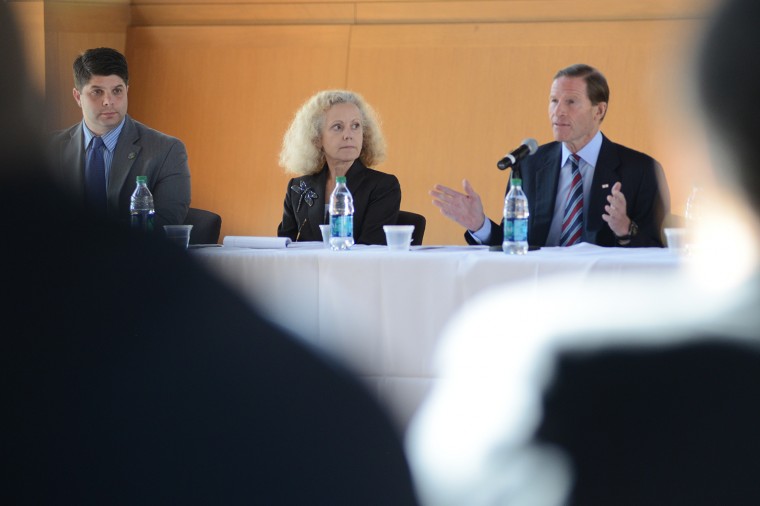 This was one of a series of listening sessions the senator is conducting around the state. In his discussions with students he shared details of legislation he has proposed to provide better frameworks on campuses for handling sexual assault cases. Under the bill, colleges and universities would be required to identify confidential advisors and implement minimum training standards. Financial penalties would be imposed on schools that do not comply.

The listening session was held just days after the release of Wesleyan’s annual report on the university’s response to sexual violence, and release of federally mandated “Clery data” on campus crime. Wesleyan has seen a marked increase in the number of reported sexual assaults during the past two years, which was expected given the university’s improved reporting protocols, according to Title IX coordinator and Vice President of Equity and Inclusion Antonio Farias.

“We all wish for a campus free of sexual assault, but to the extent that assaults do occur, we want them to be reported,” Farias said. “We’ve made progress in this area, improving our reporting mechanisms and enhancing the structures in place for survivor support.”

Farias joined Wesleyan’s staff in 2013 and has since reorganized the Office of Equity and Inclusion, recently hiring Debbie Colucci as Equity Compliance Director and Deputy Title IX Coordinator to further buttress Wesleyan’s efforts to address issues such as sexual violence and develop education and prevention programs.

“This year we will continue to evaluate our policies with regard to sexual violence, including our investigative approach, which must be responsive to trauma in form and practice,” Farias said in a memo to the community. “We will focus resources on educational campaigns, and we will deepen our relationships with local agencies. As always, we rely on the support of the entire community in our efforts to make our campus a safe place for everyone.”

In addition to improving its policies and procedures for investigation of assaults and adjudication, Farias said the university is expanding prevention programs. For example, WesWell is providing regular training in bystander intervention, a program with a proven track record – just one of numerous efforts to improve campus climate and safety.

Wesleyan now has two standing Title IX policy and education committees – part of the effort to develop an organizational structure that will ensure  compliance with the law and  advance equity and inclusion.Also in attendance at the  session with Blumenthal were Wesleyan administrators, including President Michael Roth and Provost Ruth Weissman; Middletown officials including Mayor Daniel Drew and Middlesex County State’s Attorney Peter McShane, Middletown General Counsel Brig Smith, Superintendent of Schools Pat Charles and representatives of the Middletown police department, Captain Gary Wallace and Deputy Chief of Police Michael Timbro; Beth Hamilton from Connecticut Sexual Assault Crisis Services;  Judy Greiman, president of the Connecticut Conference of Independent Colleges, and representatives from the Women and Family Center of Middletown.

On Oct. 15, Wesleyan and the city of Middletown will sign a “memorandum of understanding” on sexual assault, which details the responsibilities and procedures of both the university and city law enforcement in handling assault cases. Such an agreement marks a step forward in campus-community cooperation around the issue of crime, according to Drew.

“To effectively deal with crime such as sexual assault, you do need a tremendous cultural shift,” the mayor said. “There’s a right way and a wrong way, and this type of MOU is the right way.”

In remarks opening the session, Roth noted that reporting assaults is the first, necessary step toward improving campus climate.

“You can’t have a strong educational experience if you live under the threat of violence,” he said. “Making it more visible is painful, but it requires us to confront the problem. And once the problem is out in the open, it is our responsibility to solve it.”

Students attending the session expressed doubt that Blumenthal’s bill, which has garnered bipartisan support, would provide enough penalties under Title IX on the issue of dealing with perpetrators. They also questioned why additional funding for Department of Education oversight was not included in the legislation.

Congress is out of session in advance of the mid-term elections, and there may not be time to schedule hearings during a lame-duck session before the next Congress. In that case, the bill would have to be re-introduced in January, according to Elizabeth Benton, a Blumenthal spokeswoman.

This semester, Wesleyan students have been active in creating awareness around the issue of sexual assault. A project by Sally Rappaport ’16, “Not Asking for It,” is gaining wide traction in social media, and a video she recorded for the project has inspired students at other campuses to do likewise.

“I wanted to address the issue of victim blaming,” Rappaport told the Hartford Courant.“I realized this is an issue that so many have to deal with and they are not supported at all. Something would happen to an individual and of course, it’s not their fault, but they would blame themselves and other people would say: This probably happened to you because you were doing X, Y or Z.”

The video features students dancing to Lauryn Hill’s “Doo Wop,” with the message that any unwanted sexual attention is not a woman’s fault.

In early September, student organizers brought the Monument Quilt, which commemorates survivors of sexual assault, to campus. That event was also attended by Blumenthal,  along with Sen. Chris Murphy, D-Conn.