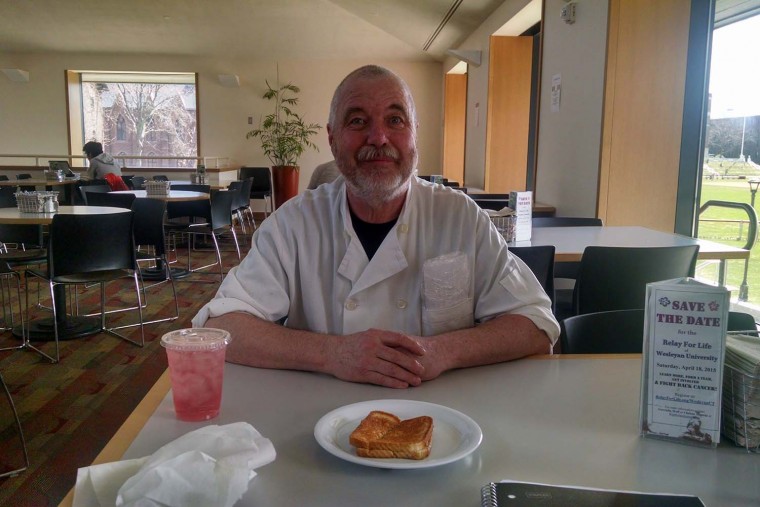 In this Q&A we sit down with David McClure Csere, chef for Bon Appétit, recipient of the 2015 Morgenstern-Clarren Social Justice Employee Prize. The award was created in 2009 in memory of Peter Morgenstern-Clarren ‘03 who pursued social justice while a student at Wesleyan. Morgenstern-Clarren’s activism included securing benefits for Wesleyan custodial staff, participating in the United Student and Labor Action Committee, and contributing his leadership to the campus chapter of Amnesty International. Peter’s parents, Dr. Hadley Morgenstern-Clarren and the honorable Pat Morgenstern-Clarren of Shaker Heights, Ohio, are sponsoring this award that honors their son’s activism for the public good.

Q: When and why did you decide to work for Wesleyan?

A: When I graduated from UCONN I worked a sales job and didn’t really like it. I wanted to work with my hands, to make things from scratch. After working odd jobs, I was finally given an opportunity to work as a cook, and then took classes to develop my chef skills. It was basically an apprenticeship program. After completing that training program, I applied to Wesleyan and was offered a job. That was in 1983, so I’ve worked here for more than 31 years.

Q: What is the best part about working for Wesleyan?

A: Meeting and interacting with the students. I like to go to at least one game of all of the Wesleyan sports each year. I also attend the senior thesis video and art projects.

Q: Where are you from? What was your major in school?

A: I am from Portland, Conn., which is right across the river from Middletown. I attended the University of Connecticut (UCONN) and got my bachelor of science in business administration, with a minor in horticulture.

The minor in horticulture means I can, and have, grown all of the local foods before, which allows me to tell which local produce is really fresh.

Q: Who influenced you the most when you were growing up?

A: That would have to be my grandfather, who overcame polio as a child. He was a cook during World War I, and then became a contractor. He had to work hard during the depression, but took me to jobs and taught me about the nature of relationships and individuals. An inspirational man, and a man of his word. He would make deals with a simple handshake.

Q: You were recently honored with the Morgenstern-Clarren Social Justice Employee Award. How did it make you feel?

A: I am still on Cloud Nine! I am who I am, and have always wondered if people notice my work. Winning this award means students do notice, means that I am doing a good job. I love how this award is not just because of my grilled cheese sandwiches, but rather more to do with how I interact with the students. I feel on top of the world.

Q: How did you learn to make those legendary grilled cheese sandwiches?

A: From my mother. She made them for us growing up. I make sure to spread melted butter on both sides of the bread; it makes it taste and look better.

A: I would like to thank Jessica Gorak ’15 for nominating me. I’m very humbled and touched that she would do that for me.