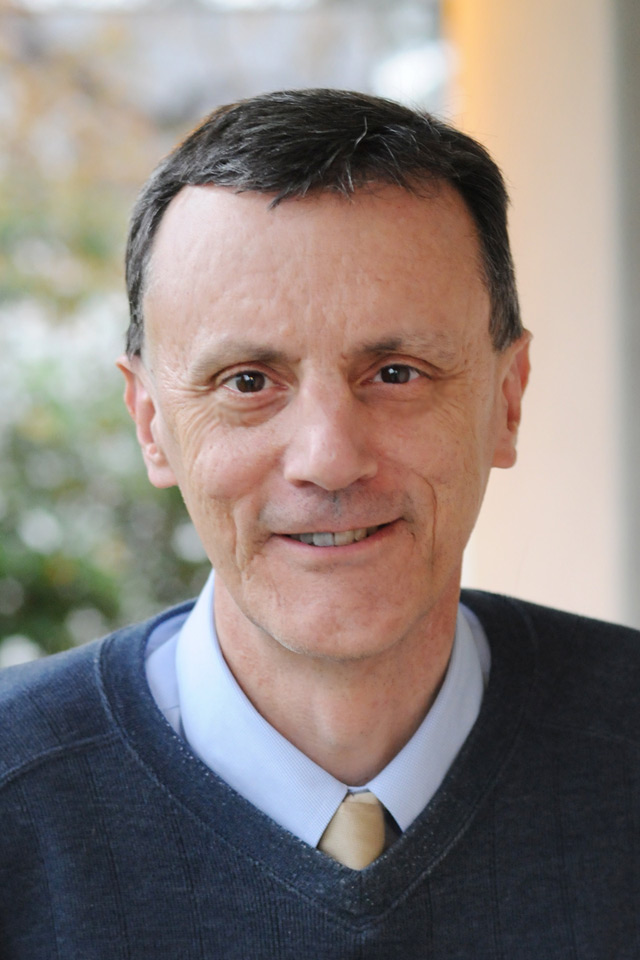 For more than 30 years, Joseph Siry, the Kenan Professor of the Humanities, professor of art history, has had a love affair with Wesleyan’s iconic Center for the Arts, one of the great modernist architectural achievements in New England.

“For me, it has been exceptionally helpful, psychologically, to work in and be around these buildings,” Siry said. The 11 modernist limestone buildings were little more than a decade old when he joined the faculty.

Designed and built by the prominent Connecticut architectural firm Kevin Roche John Dinkeloo and Associates, the Center was Wesleyan’s first major building to depart from the neoclassical and neomedieval buildings that dominated the campus. The departure was striking and, when the Center opened, in 1973, struck many observers as radically discordant with the classical architectural ethic that had prevailed at Wesleyan since the university was founded, in 1831.
Inspired by the 40th anniversary celebration of the Center, organized two years ago by Pamela Tatge, former director of the Center, Siry decided to chronicle the Center’s development from its design, in 1965, until it opened. His meticulously researched and richly detailed account, “Roche and Dinkeloo’s Center for the Arts at Wesleyan University: Classical, Vernacular and Modernist Architecture in the 1960s,” was published in the September issue of the Journal of the Society of Architectural Historians.

The cluster of buildings that comprise the Center, situated within a six-acre grove of some 1,500 mature trees originally on the northern side of the campus, may have seemed jarringly out of tune with the balance of Wesleyan’s traditional New England college architecture. But Siry documents Kevin Roche’s deep awareness of the campus’ prevailing themes and explains how he designed the new complex to resonate with many of those ideas while, simultaneously, addressing a host of other challenges.

“When Roche Dinkeloo was commissioned to design the Center there were significant questions about whether modernist architecture could fit with the older styles of architecture, but that was only one issue impacting the design,” Siry said.

The late Professor of Art John Martin, a Cornell-trained architect, chaired a faculty committee that began holding weekly meetings about the project in 1963. By the time Roche Dinkeloo was commissioned, three years later, Martin and his colleagues had refined their concerns to three major directives.

Wrote Siry: “(1) the center must not be a megastructure…(violating) the scale of existing…architecture on the site, (2) the spaces (within the buildings) had to serve the particular needs of each department, and (3) no trees were to be removed…”

How Roche addressed those concerns while also passionately championing his concept for the Center and finding ingenious ways to integrate the 11 buildings among the trees makes compelling reading. In fact, the open spaces between the buildings came to serve as visual frames that allowed the complex to play with, and against, the surrounding natural landscape, ingeniously exploiting the trees’ shapes, colors and shadows and integrating them into the design. As Roche stated, in response to questions from Martin’s committee concerning the number of buildings and the possibility that they would appear cluttered: “Very few buildings will be seen in their totality as isolated structures and it is the play of space, modulated by the light and shade of the trees that will provide the visual interest as one moves through the complex.”

Rather than glaringly obscuring nature, Roche’s design intentionally integrated it to aesthetic and functional advantage. “At Wesleyan, construction of 11 buildings rather than one meant that ‘one avoids long, unattractive corridors. You have to step out of doors immediately from every building’ rather than moving through corridors between classrooms,” Siry wrote, citing Roche.

Roche won the Pritzker Prize, architecture’s equivalent of the Nobel, in 1982. His design for the Center for the Arts, Siry said, melded vernacular architecture with mid-20th century modernism resulting in a complex that has stood the test of time for four decades.

nextFall is in the Air at Wesleyan