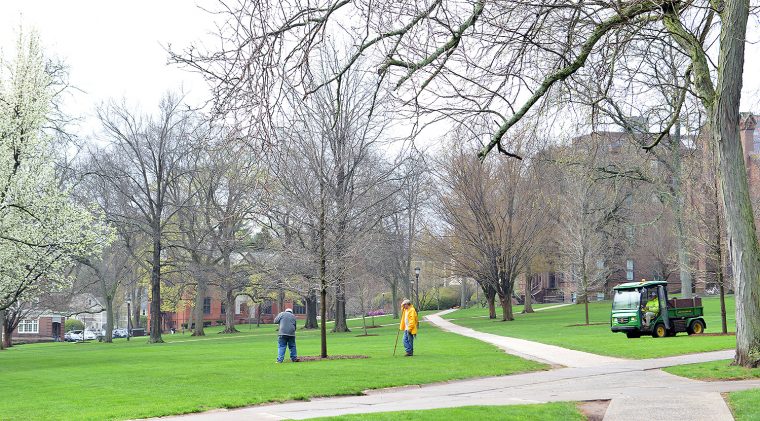 In honor of Arbor Day on April 28, Wesleyan is celebrating the planting (or proposed planting) of more than 45 new trees on campus in 2017.

Pale-pink blossoming cherry trees, a hardy pin oak, an endangered dawn redwood and a Chinese lobed-leaf Ginkgo biloba are among the new perennial plantings peppered across the Wesleyan landscape.

Since trees become a permanent fixture, Grounds Manager Rob Borman takes many factors into consideration before tilling up any soil and planting roots.

He notes the history of campus; the existing tree canopy; what trees will thrive in Connecticut’s climate; proximity to buildings, sidewalks and roads; surrounding landscape; how it would affect snow plowing, mowing and other grounds maintenance; and benefits to the environment.

“We also consider the Wesleyan tour route and high visibility areas, and we always value feedback from the Wesleyan community,” Borman said. “All of this is considered both for time of planting, as well as the tree’s full maturity.”

The trees and their planned locations include:
One birch cluster in front of the Freeman Athletic Center;
Two Norway spruce on Warren Street near the Freeman Athletic Center;
23 Yoshino cherry trees along Vine Street;
Eight Kwanzan cherry trees near West College;
Two red maples, two red oaks and one pin oak near the Foss residences;
One Ginkgo in front of the Public Affairs Center;
Two paper bark maples, a birch cluster and dawn redwood between the Davison Art Center and Davison Health Center;
Two paper bark maples near the Center for African Studies;
One red maple across from Alpha Delta Phi;
One hybrid elm in front of Judd Hall;
And one red oak in the center of College Row.

Since 2014, Borman has led the effort to plant more than 230 trees and shrubs on campus.

Wesleyan’s efforts have contributed to the City of Middletown receiving an Arbor Day Foundation Tree City USA designation for 27 years.

While many trees grow up, others come down.

“We try to avoid cutting down existing trees at all costs,” Borman explained. “If we remove a tree, it’s because the tree has died, it was injured due to a storm, it is too close to structures or construction projects, or it is a safety hazard to the community. We always try to plant one tree for every felled tree.”

Wesleyan grounds will continue to plant more species in the fall.