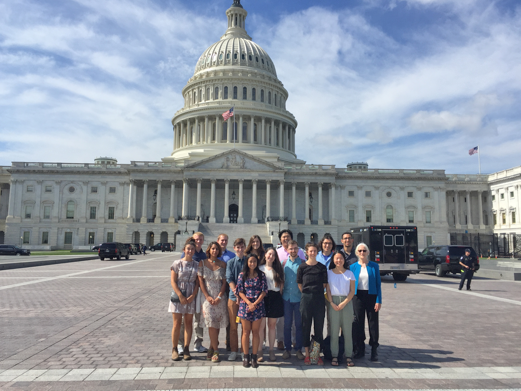 Students enrolled in the Oceans and Climate service-learning course recently traveled to Washington, D.C., where they had the opportunity to learn how legislation related to climate change is moved through Congress.

The trip, held Sept. 25-26, was led by Suzanne O’Connell, professor of earth and environmental sciences, faculty director of the McNair Program.

After a day of travel and overnight stay, the group took an early Metro ride to the Library of Congress in Washington, D.C., where they met with representatives of the Congressional Research Service. Later that morning, the class traveled to the Dirksen Senate Building, which houses the U.S. Senate Committee on Commerce, Science and Transportation. There, they met with two National Oceanic and Atmospheric Administration’s (NOAA) John A. Knauss Marine Policy Fellows.

The students shared lunch with policy staff in the Dirksen building and then traveled to the Rayburn House Office Building to meet with Sarah Laven, a legislative fellow for Rep. Rosa L. DeLauro (CT). After touring the U.S. Capitol, the class returned to Middletown.

In the Oceans and Climate class, students are studying the major properties of the ocean and its circulation and changes in climate, including the effects of variations in greenhouse gas concentrations, the locations of continents, and the circulation patterns of oceans and atmosphere. They look at past variations in Earth’s climate and oceans and try to understand the implications for possible climates of the future.

nextLoui Co-Authors Article on Human Creativity and the Brain