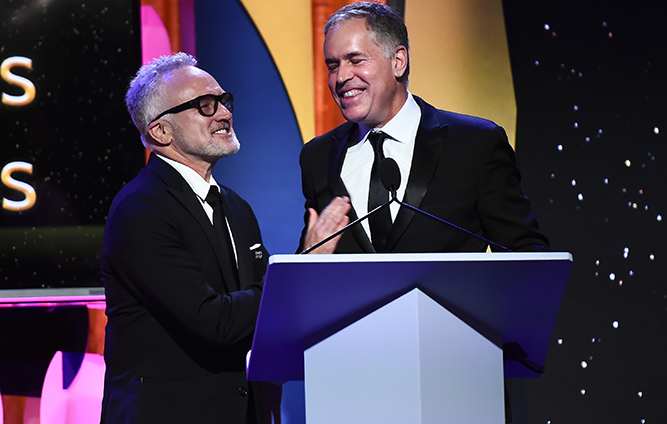 Dan Greenberger ’81 attended the Writers Guild Award as a nominee in the category of On-Air Promotion (“the TV equivalent of movie trailers,” he explains) on Feb. 11, 2018. As an award veteran (he’d already won twice previously), Greenberger had done his homework: checked who was presenting his category and prepared an acceptance speech in case he won.

Just before the ceremony, as people milled around the dinner tables, he ran into his Wesleyan senior-year housemate, Bradley Whitford ’81, who had news: the scheduled presenter in the on-air promotion category had canceled. Instead, “I’m presenting in your category,” Whitford told his friend.

And from there, everything went off script for Greenberger, who quickly tried to reformulate his prepared speech to celebrate the friendship on stage, should he win.

Greenberger was the winner, and when he dashed on stage, the two embraced and ribbed each other gently about their college housekeeping habits.

In a conversation afterward with the Connection, Greenberger acknowledged the uniqueness of sharing that moment with his fellow theater major. “Senior year was a bonding time, as we were both getting ready to go out into the world.

“Brad and I took a train together to New York to audition for Juilliard,” Greenberger recalls.”He got in and I didn’t—and that’s when I decided I would be a writer.” In fact, Whitford had appeared in Wesleyan plays that Greenberger had written.

“Obviously, at the presentation, we were joking around a lot—but how great a full-circle moment is that? To be on stage, getting an award, with someone to whom you’ve talked about dreams and hopes when we were in college—I’m just so proud of what Brad has done with his career. As an actor, he keeps getting better.”

Greenberger, whose current work at CBS includes writing the promotions for Kevin Can Wait, notes that his favorite assignment was also very Wesleyan: How I Met Your Mother, the nine-season sitcom written by Carter Bays ’97 and Craig Thomas ’97. “I loved the sensibility; it was smart, it was funny, it was edgy—and I loved the fact that it was created by Wesleyan guys,” he recalls.

And he also knew it well: “When you work on promoting a show, you really get to know it almost better than anyone. You watch every episode more than once, you take it apart, you take notes on it: ‘Oh, here’s a good line; there’s a good moment.’ These are the pieces of the puzzle that I use to build the promotion—a story in 20 seconds, and every syllable counts.”

As for Whitford, Greenberger maintains: “He’s one of the very funniest people I’ve ever known. I’ve always told him he should do more comedy.

“But seriously—any time I look at Brad I go back to those days at Wesleyan when we were both theater majors falling in love with ‘the business,’ and wondering, ‘how do we get into this, and how do we make our mark?’ It was so great to have our paths converge on that stage.”

previousStudents Learn about New Technologies Being Used to Study the Past