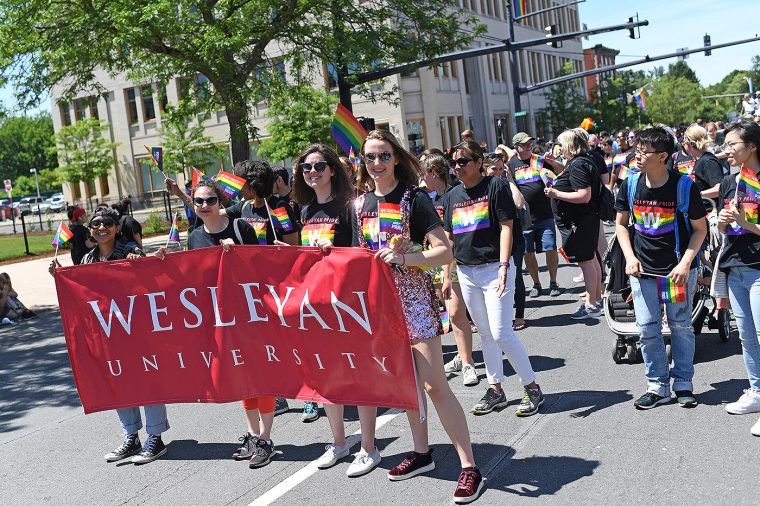 Laura Patey, associate dean of student academic resources, helped coordinate Wesleyan’s efforts in the parade. She has participated in similar parades in Boston and New York and “knows the power of being at events that celebrate the richness of the LGBTQ community,” she said.

“I was thrilled when I heard that Middletown was hosting a Pride Parade and even happier when I found out that Wesleyan was a sponsor for the event,” Patey said. “It was wonderful to share this experience with family, friends, students, staff, faculty, and alumni.”

Sporting a Wesleyan Pride t-shirt, Penney Jade Beaubrun, assistant director for alumni and parent relations, marched with the Wesleyan group to demonstrate her support for the LGBTQ community. En route, she distributed Wesleyan Pride flags to dozens of parade-goers.

“This (parade) is history in the making,” she said. “The first-ever Pride Parade in Middletown gave us an opportunity to show that we are proud to live in a diverse town. The celebration was a testimony of how far we have come and proves that together we are a force to be reckoned with!”

If the parade becomes an annual event, Kian Caplan ’21 hopes to see more of Wesleyan’s LGBTQ community participate and band together.

“I think that the parade has little to do with sexuality/gender, but rather marks a moment when we can celebrate together our triumphs as a minority (especially those while still discovering who we are),” Caplan said. “To me, it has to do with celebrating the strength we’ve attained from accepting we are different and overcoming commonly shared adversity, whether that be bullying in school, discrimination, or violent hate crimes, among others. It’s a moment when we can show the world that we have bested whatever shit the world has thrown at us and proudly walk down the street in our own skin.”

This year also marks the 50th anniversary of the Stonewall Riots, which led to gay liberation movements and LGBTQ rights in the United States.

Photos of the Pride Parade and Wesleyan participants are below: (Photos by Olivia Drake)