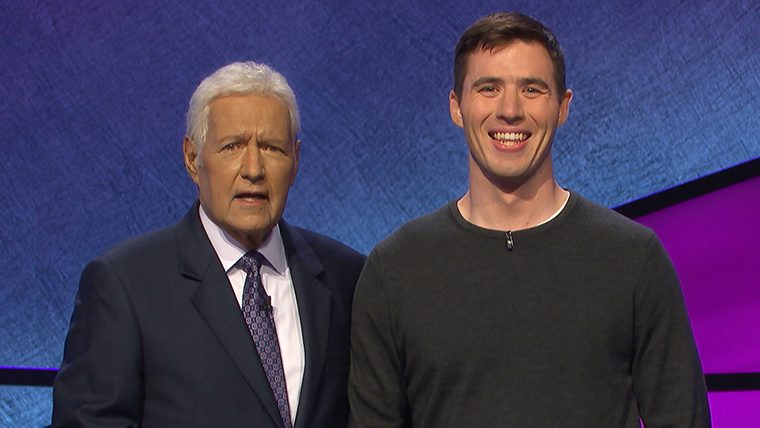 J.R. Mannetta ’13 is not a super genius. Nor is he the kind of guy who goes around flaunting his broad grasp of esoteric facts. In fact, he’s pretty much a regular guy. A regular guy with impressive knowledge of wide-ranging arts, sports, and pop culture, who, with a healthy dose of perseverance, patience, and practice, made it to the big stage to compete on that bastion of television trivia, Jeopardy!

The Boston native’s interest in trivia—and Jeopardy! in particular—began when he was in high school and continued through his college years at Wesleyan, where he competed in trivia contests at La Boca Restaurant with friends.

Although he watched Jeopardy! religiously and kept up his trivia skills, he started taking the online screening tests mostly as a whim. For a few years, he didn’t hear anything. Then in early 2019 he took the test again and felt he did pretty well. A few months later he received an email inviting him to come in for an in-person audition.

“I was about to do a professional development presentation for my entire workplace so my anxiety was super high,” he said. “And then literally right before I started the presentation I got that email. I was so through-the-roof excited that I just cruised through my presentation.”

Still, he knew that passing the online test was just the first step. For the in-person audition, producers would be looking at more than just trivia acumen, they were looking for personality and charisma.

“The emphasis is on pace of play and moving the game along quickly, so my focus was on speaking loudly, speaking clearly, and being someone who they could see on TV. I’m frequently told I’m loud, so I was like, that probably won’t be an issue. But I was very mindful about how I was coming across.”

It would be another 15 months before Mannetta would finally get the call—a time during which he answered every single “Unknown Caller” number that came to his cell in hopes that it would be the call. “I talked to a lot of telemarketers,” he admitted. In December 2019, the call came through and in January 2020, with his mom, sister, and three Wesleyan buddies in the audience, Mannetta took his place on stage with Alex Trebek and two other competitors.

By the first commercial break, Mannetta had claimed the lead and he held it through the entire first round. Things were going as well as he could have hoped. And then, during the second round, the contestant next to him, Leanne Gonzalez-Singer, made an offhand remark that changed the whole trajectory of the game.

“In the second round, I remember the woman next to me saying that she was going to switch hands on her buzzer. I thought nothing of it,” Mannetta recalls. “And then she just went on this run! It was like that scene from The Princess Bride with Inigo Montoya!”

Unfortunately, unlike in the film, Mannetta could not parry with the confession that he, too, had not been using his dominant hand to buzz in. And despite a good run and a heated battle through Final Jeopardy, Mannetta ultimately finished the game in second place.

Still, he has no regrets. He went home with $2,000 in winnings, which he hopes to use toward a trip with his Wesleyan friends once COVID-related travel restrictions are lifted. And he also got to test his skills in a contest at a nearby bar where past Jeopardy! contestants (including grand champion Ken Jennings and other famous competitors) often congregate. “My team came in 10th out of 14 teams, but there was just so much institutional knowledge and such an interesting Jeopardy! community there,” he said.

As for what’s next? Mannetta isn’t sure. After more than a decade of watching Jeopardy! almost every day, he finds himself in a strange position.

“I’m kind of surprised by this, because I thought I watched the show because I genuinely like it, but other than my episode (which aired on March 31), I haven’t watched since the taping in late January,” he admitted. “That used to be a routine of mine, I would watch it every day. I didn’t think I was watching it in preparation for being on the show, but it kind of seems that way because I have very little interest in watching it now. It doesn’t come from bitterness or spite, it’s more just closure. The lead-up to being on the show was so consuming and exhausting, I don’t think I can do better than that.”