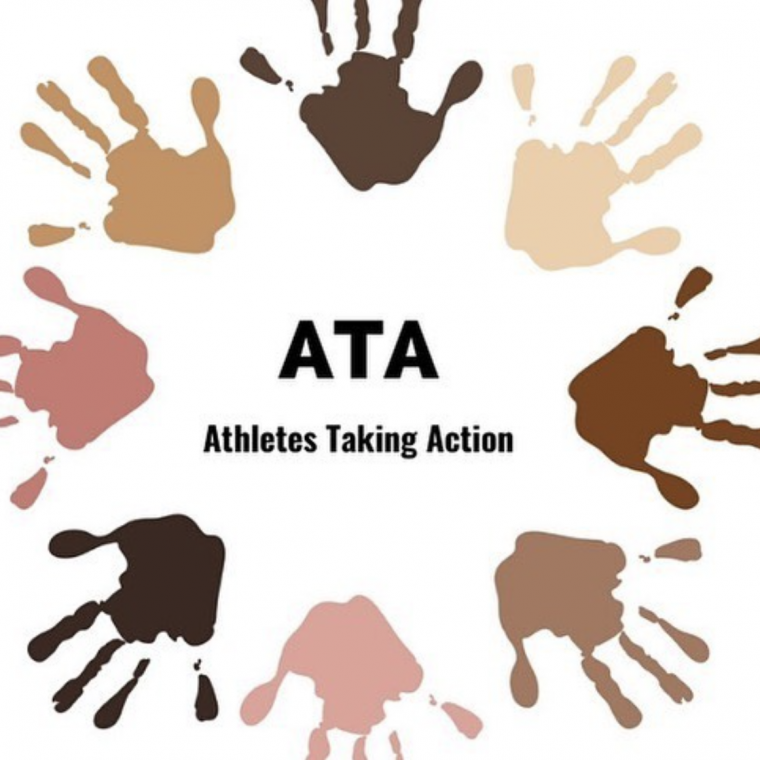 “It’s been a recurring cycle ever since,” Dezonie said. “Philando Castile, Tamir Rice, Eric Garner, Breonna Taylor, Sandra Bland, and unfortunately the list goes on. Now, with the murder of George Floyd, I can only hope that this time there will be a different outcome, and we can get justice for these families that have been affected by these unjust killings.”

Seeing a need for action, Dezonie and three of his teammates, Jordan James ’21, Gabe Ravetz ’22, and Antone Walker ’21, grouped together to organize an outreach program through social media called Athletes Taking Action (ATA). The four basketball players began networking with other student-athletes on campus and found widespread interest in other teams wanting to make donations in support of the Black Lives Matter movement.

“We got notes back not only telling us that their team was now collecting donations but that their teammates wanted to share the initiative with athletes they knew at other schools,” Ravetz said. “This is when we realized the true impact a concept like this could have.”

Athletes Taking Action provides potential gift-makers with a list of 81 organizations taking donations and an additional list of 48 people who are matching donations to organizations supporting the Black Lives Matter movement. But if teams are so inclined, the Wesleyan men’s basketball players have made it known that individual teams retain the autonomy to donate to an organization of their choosing.

In less than two weeks since its inception on June 3, Athletes Taking Action has 39 donations from 37 different teams participating, raising more than $48,000 for Black Lives Matter-related organizations. Seventeen Wesleyan teams have made donations, 10 of which have amounted to at least $1,000, including a combined total of more than $11,000 from the Wesleyan women’s basketball, women’s and men’s lacrosse, and field hockey teams. As important as the donations are, perhaps most impressive and where the true significance lies is that the movement has spread across the country as donations have come in from teams representing 16 different institutions (Wesleyan, Smith, Bates, Claremont Mudd Scripps, University of New Haven, Cornell, Blair Academy, University of Connecticut, Williams, East Catholic, Colby-Sawyer, University of North Carolina, Harvard, Andover, Princeton, and Mount Holyoke).

“While dollars are vital to creating change and a great way to measure impact, we are much more excited about the participation and the enthusiasm that is currently surrounding this movement,” Ravetz continued. “All too often in our society, people don’t want to ‘get political’ and avoid taking a stand. Many may recognize issues, yet choose to stay silent. Silence only furthers the agenda of the oppressor. We are hoping this can help normalize the idea of athletes taking action (hence the name) and using their platform to inspire others to take action as well.”

James is inspired by everyone who has taken a stand on the side of justice and equality and credits professional athletes Muhammad Ali, Jesse Owens, and Bill Russell, to name a few, who have taken stands against injustice.

“While I truly believe that it takes all of us to advance our society past its continued oppression of citizens of color, I think athletes can and should play a vital role in helping said progression. I roundly reject the ‘shut up and dribble’ rhetoric of those who dismiss athletes as nothing more than that,” he said. “There is no debating the significance of LeBron James speaking out to his 67 million Instagram followers, but what I have come to understand through Athletes Taking Action is that no matter the size of the platform, it is the responsibility of all of us to drive positive change however we can, first in our own communities, then beyond.”

With the return of collegiate sports still to be determined, this group of Wesleyan Cardinals is allowing their voices to be heard in ways outside of what’s typed in a box score. Head men’s basketball coach Joe Reilly is particularly proud of the effort put in by his players in a manner that goes above and beyond the role and duties of a common college student.

“I am so proud of our team and the players who are taking a leadership role and impacting positive change in our world,” Coach Reilly said. “Wesleyan is an amazing place—they are using their skill sets to really make a difference.”

To take action, visit the Instagram page (@atachallenge) or follow the hashtag #atachallenge for more information. Links are included for instructions on how to donate, suggested organizations to donate to, organizations/individuals matching donations, and why Athletes Taking Action serves a greater purpose, as well as many more links for those who can’t donate or protest but still would like to offer support.

“Giving teams an outlet to drive change in whichever way they see fit has been of great importance to the group since the onset of the ATA Challenge,” Jordan exclaimed. “Whether teams give to national organizations, bail funds for protesters, or organizations to help rebuild communities adversely affected by the protests, they can feel good that they have given to the cause that is nearest to their hearts.

“I believe that the changes we have begun to see in the wake of George Floyd’s death are just the start,” James said. “We are part of a movement that intends to stay active and force positive change no matter how long it takes.”