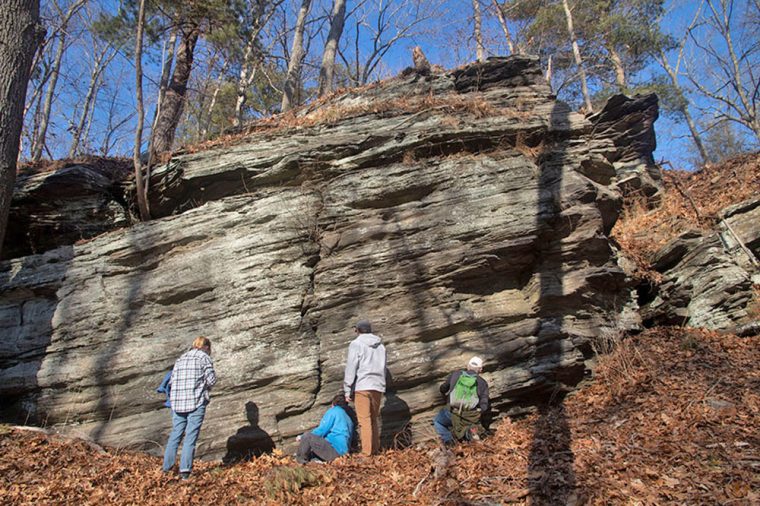 This spring, a group of five students enrolled in Wesleyan’s Geologic Field Mapping service-learning class undertook a project to map the geology of Gillette Castle State Park and develop educational materials for the general public based on this map.

The 184-acre park, which was purchased by the State of Connecticut in 1943, sits atop a hill overlooking the Connecticut River. Here American actor and playwright William Hooker Gillette, known for playing Sherlock Holmes on stage, built and lived on this estate from 1919–1937. His 14,000-square-foot, fieldstone-faced mansion resembles a medieval castle, hence the park’s namesake, Gillette Castle.

The ‘castle’ is surrounded by woodlands, trails, ponds, cliffs, and massive rock outcrops.

“In order to make educational materials that are approachable and useful, we needed to make it of interest to anyone—whether they were a Connecticut geologist or a family looking for a place to picnic,” said Alexa Trujillo ’22. “We found joy in toeing the line between too scientific and not scientific enough. All of us coming from different experiences with geology, writing for an audience, and education made us the perfect team to create something like this.”

On May 15, Trujillo, Caroline Murphy ’20, Oliver Benson ’22, Emmy Hughes ’20, and graduate student Donald Koepp presented their work to their “clients” at the Connecticut Department of Energy and Environmental Protection (DEEP) State Geological Survey. The project was supervised by course instructor Phillip Resor, associate professor of earth and environmental sciences and education studies.

“Even after we moved to distance learning, the students rose to the occasion and did a great job synthesizing their fieldwork along with other material to create GIS and interactive maps,” Resor said.

The class first met in person at the Connecticut DEEP headquarters in early February, where staff introduced students to the park and provided examples of geologic maps and story maps from other parks. After learning basic GIS skills, students created base maps and spent three afternoons on site, conducting fieldwork in February and early March.

While in the park, the students looked for outcrops of rock.

“These were crucial in the geologic story because they are pieces of what was once under the ground, but came up through the surface. They can tell us the story of what went on underneath where we were standing,” said Trujillo, a sociology and education studies double major. “We looked for folds, banding, mineral types, strike, dip, and much more. Basically, we wanted to know everything. We cataloged everything we found because any piece could be the missing connection to the geologic story.”

The class ultimately produced an interactive map through the software ArcGIS that shows the park’s trails, unique locations, benches, parking, and “all of the outcrops we found, some cool locations to check out, bathrooms, and anything else you would normally find on a map,” Trujillo said.

They also created a “StoryMap” that includes sections on Gillette himself and his castle, the geology, and hidden gems located within the state park. The maps will be published online by DEEP at a future date.